Fauci: US ‘Going in Wrong Direction’ in Coronavirus Outbreak

The U.S. is “going in the wrong direction” with the coronavirus surging badly enough that Dr. Anthony Fauci told senators Tuesday some regions are putting the entire country at risk — just as schools and colleges are wrestling with how to safely reopen.

With about 40,000 new cases being reported a day, Fauci, the government’s top infectious disease expert, said he “would not be surprised if we go up to 100,000 a day if this does not turn around.”

“I am very concerned,” he told a hearing of the Senate Health, Education, Labor and Pensions committee.

Infections are rising rapidly mostly in parts of the West and South, and Fauci and other public health experts said Americans everywhere will have to start following key recommendations if they want to get back to more normal activities like going to school.

“We’ve got to get the message out that we are all in this together,” by wearing masks in public and keeping out of crowds, said Fauci, infectious disease chief at the National Institutes of Health.

Connect the dots, he told senators: When and how school buildings can reopen will vary depending on how widely the coronavirus is spreading locally.

“I feel very strongly we need to do whatever we can to get the children back to school,” he said.

But in recommendations for colleges released Tuesday, the agency said it won’t recommend entry testing for all returning students, faculty and staff. It’s not clear if that kind of broad-stroke testing would reduce spread of the coronavirus, CDC concluded. Instead, it urged colleges to focus on containing outbreaks and exposures as students return. 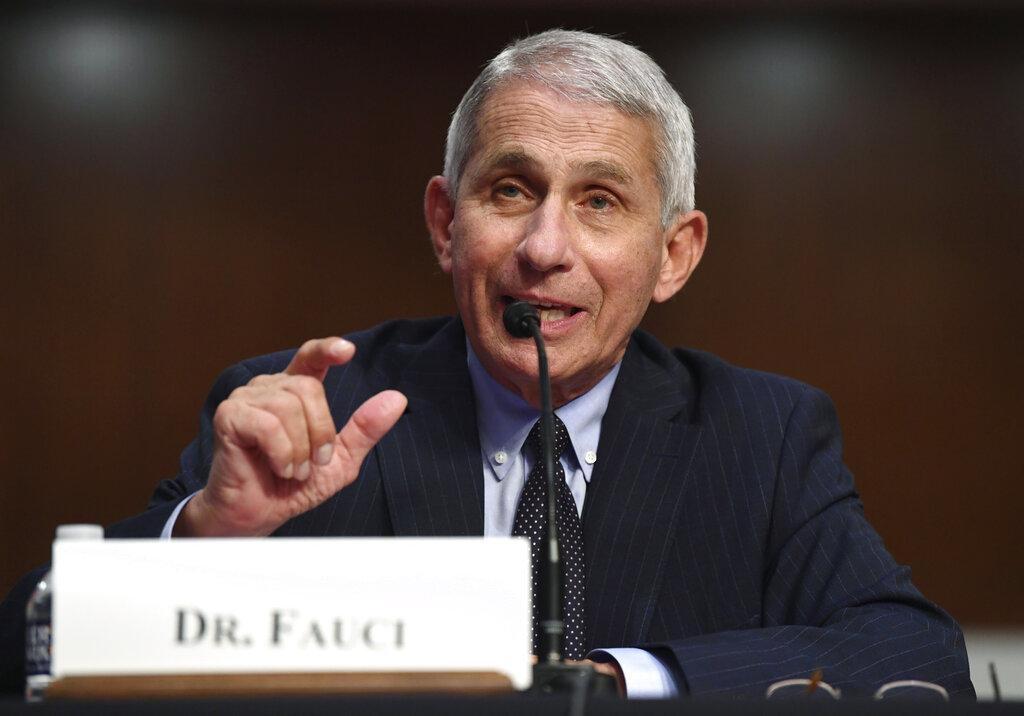 Lawmakers also pressed for what Sen. Patty Murray of Washington, the committee’s top Democrat, called a national vaccine plan — to be sure the race for the COVID-19 vaccine ends with shots that really are safe, truly protect and are available to all Americans who want, one.

“We can’t take for granted this process will be free of political influence,” Murray said. She cited how President Donald Trump promoted a malaria drug as a COVID-19 treatment that ultimately was found to be risky and ineffective.

The Food and Drug Administration released guidelines Tuesday saying any vaccine that wins approval will have to be at 50% more effective than a dummy shot in the final, required testing. That’s less effective than many of today’s vaccines but independent experts say that would be a good start against the virus.

“We will not cut corners in our decision-making,” Hahn told senators.

About 15 vaccine candidates are in various stages of human testing worldwide but the largest studies — including 30,000 people each — needed to prove if a shot really protects are set to begin in July. First up is expected to be a vaccine created by the NIH and Moderna Inc., followed closely by an Oxford University candidate.

At the same time, the Trump administration’s “Operation Warp Speed” aims to stockpile hundreds of millions of doses by year’s end, so they could rapidly start vaccinations if and when one is proven to work.

Redfield said the CDC already is planning how to prioritize who is first in line for the scarce first doses and how they’ll be distributed.

But a vaccine is at the very least many months away. For now, the committee’s leading Republican stressed wearing a mask — and said Trump, who notoriously shuns them, needs to start because politics is getting in the way of protecting the American people.

“The stakes are too high for the political debate about pro-Trump, anti-Trump masks to continue,” said Sen. Lamar Alexander of Tennessee, who chaired Tuesday’s hearing.

Alexander said he had to self-quarantine after a staff member tested positive for the virus but that he personally was protected because his staffer was wearing a mask.

“The president has plenty of admirers. They would follow his lead,” Alexander said. “The stakes are too high” to continue that fight.