Chicago is Continuing to Flatten the Curve: City Officials 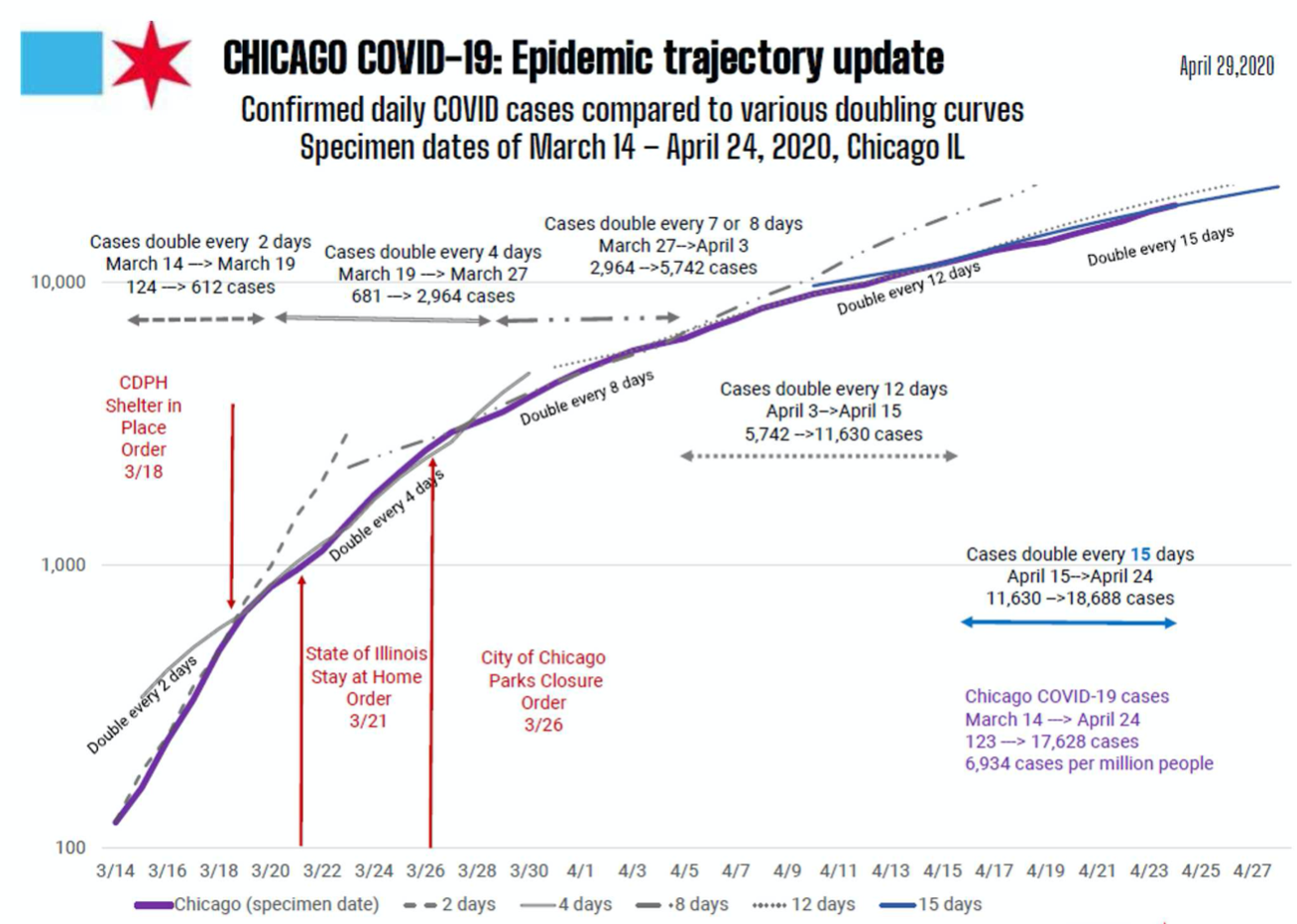 The rate of new confirmed cases of coronavirus infections has continued to slow during the past two weeks, representing “major progress,” said Dr. Allison Arwady, commissioner of the Chicago Department of Public Health.

“I am encouraged by the flattening of the curve,” Arwady said. “I’m confident we are going to see a downward trend in the next couple of weeks. I feel good about that.”

But even as Arwady said she was optimistic that the number of confirmed cases of the coronavirus and the number of deaths would start to drop in the coming weeks, state health officials announced Thursday an additional 141 people died in the past 24 hours, the second highest daily death toll.

Officials have documented more than 20,499 cases of the coronavirus in Chicago, and 875 Chicagoans have died from the illness as of Thursday afternoon.

When Gov. J.B. Pritzker ordered Chicagoans to stay home in an effort to stop the spread of the virus starting March 21, the number of confirmed cases was more than doubling every three days in Chicago, setting the city on a catastrophic course.

That prompted city, state and federal officials to start transforming McCormick Place into a field hospital, equipped to care for patients sick with COVID-19, the illness caused by the virus.

“It is absolutely the best-case scenario that McCormick Place did not need to be used for a significant number of patients,” Arwady said. “I very much hope we never need to use McCormick Place.”

However, the field hospital may be needed in the fall, when Chicago typically sees a surge in flu cases and a second wave of the coronavirus may hit, Arwady said.

Working to expand hospital capacity around Chicago was “absolutely the right thing to do,” especially since it was not clear how effective the governor’s stay-at-home order and social distancing recommendations would be in stopping the transmission of the virus, Arwady said.

Arwady said she “felt very anxious” about the number of ventilators available at Chicago hospitals for several weeks.

Pritzker announced Thursday that Illinois had sent 100 ventilators back to California, after the Golden State sent them to the Prairie State several weeks ago to help cope with the shortage.

The city has been able to ramp up the number of tests for the coronavirus by at least 50% in all 67 Chicago zip codes and by more than 100% in 22 zip codes, Arwady said.

However, the city still has a “long way to go” before testing is widespread enough to accurately track the spread of the virus, Arwady said. Approximately 30% of tests during the past seven days have confirmed a case of the coronavirus, she added.

But the rate of increasing positive tests is not rising as fast the total number of tests, an encouraging sign, Arwady said.

Chicago hospitals have been able to keep pace with the number of new infections, according to the data.

Patients sick with the coronavirus occupy about 25% of the city’s hospital beds, according to city data.

About half of the beds in the city’s intensive care units are occupied by those with the coronavirus or those who are waiting for test results but are believed to be sick with the virus, according to city data. More than two-thirds of those patients are on a ventilator, according to the data.

Cellphone data also shows a significant increase in the number of people staying close to home, based on the number of times devices checked in to the same location between midnight and 9 a.m. during the past two weeks, Arwady said. 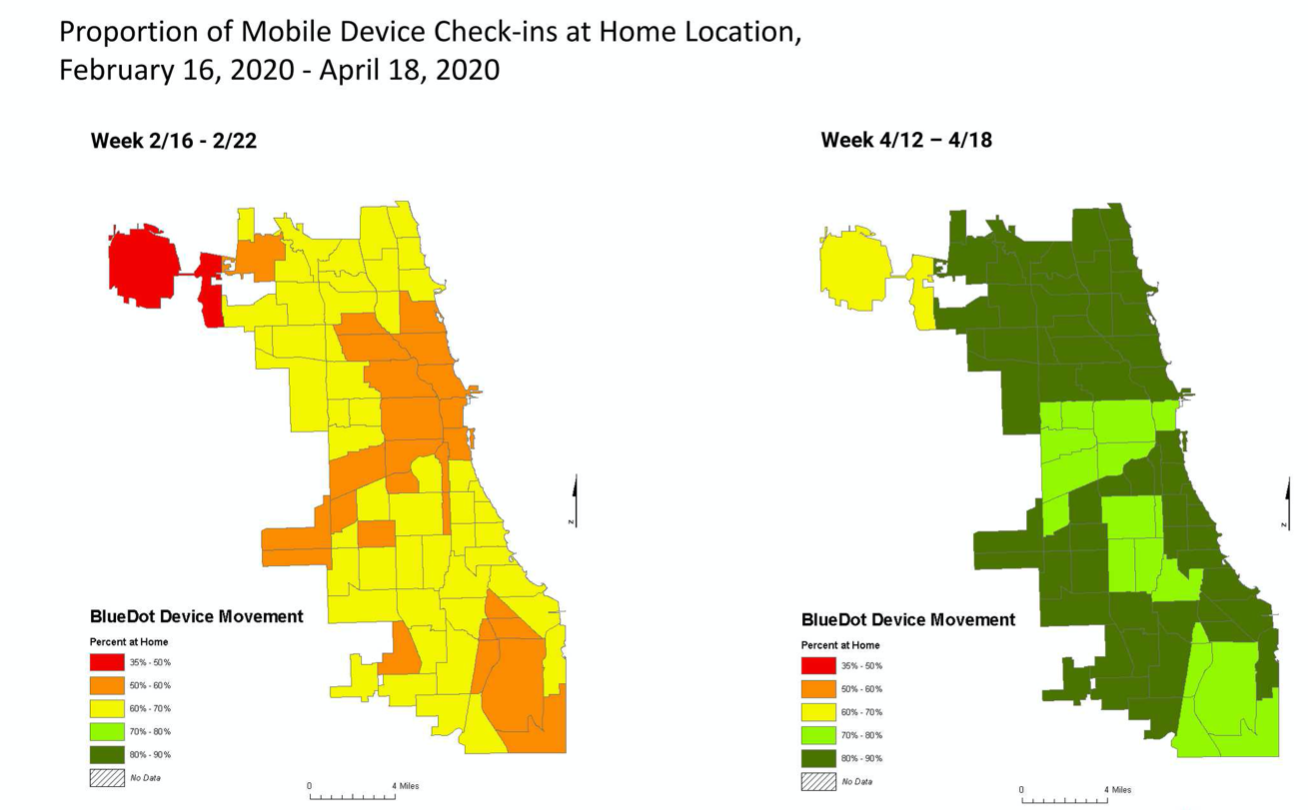 The data used by the city’s health department is based on information provided by Bluedot, a software company that provides data to health officials about infectious disease outbreaks. With users’ permission, Bluedot tracks location data, stripping away identifying characteristics of that data before sharing it with the city, Arwady said.

City officials are watching several sets of data to determine whether the city is ready to lift the stay-at-home order, Arwady said.