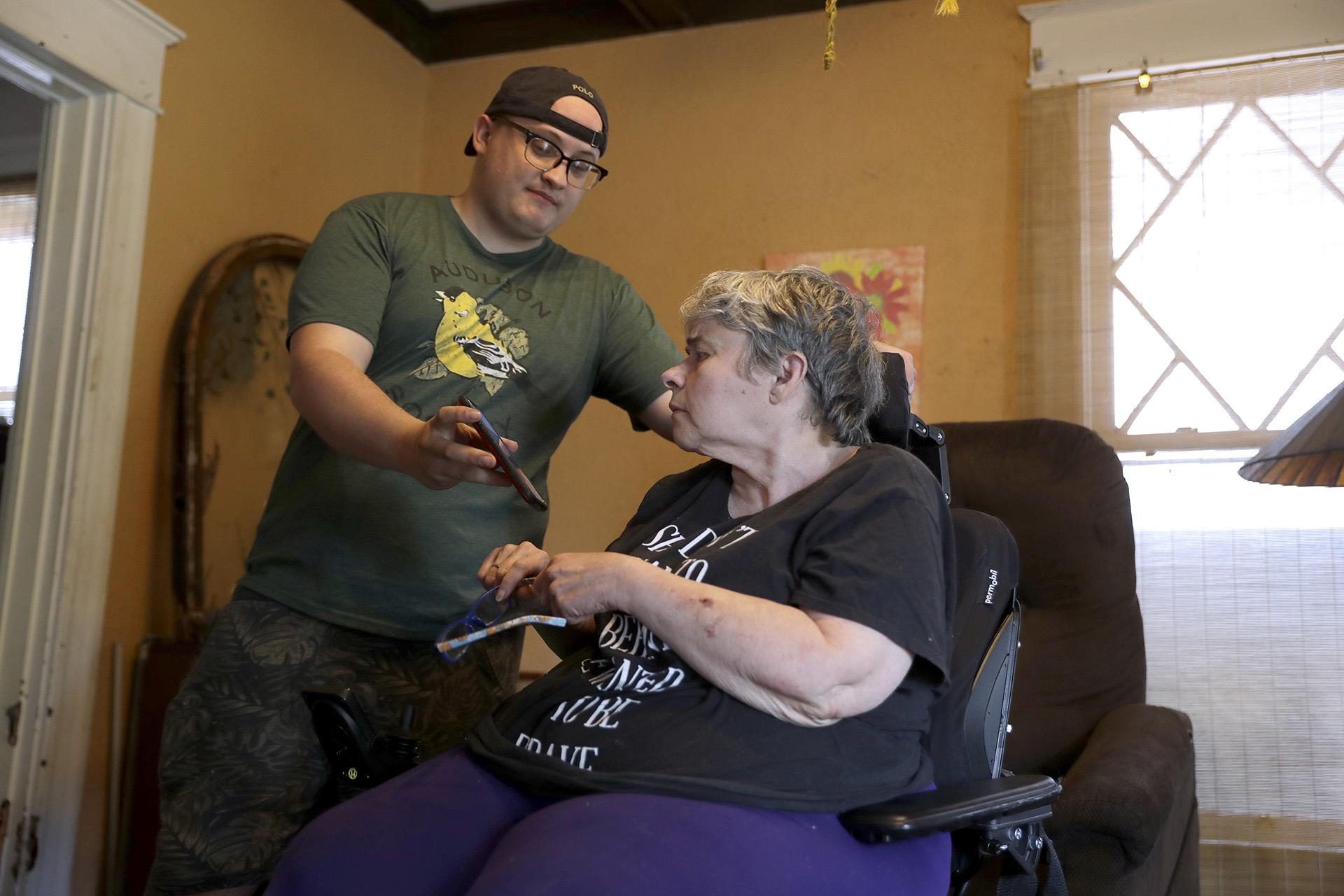 In this Tuesday, April 28, 2020, photo Zach Stafford, left, shows his mother, Debra Mize, a news alert on his phone as they watch a livestream of the daily coronavirus briefing by Illinois Gov. J.B. Pritzker on a television just out of view inside their home in Belleville, Illinois. (AP Photo / Jeff Roberson)

WASHINGTON (AP) — When John Manley tested positive for COVID-19, his sister urged him to get on the malaria drug that she’d heard Fox News hosts plugging and that President Donald Trump was heralding as a potential “game changer” for fighting the coronavirus.

But Manley, 58, a civilian U.S. Army public affairs officer, was skeptical of using a drug not approved by the Food and Drug Administration for treating the virus and decided it was a gamble not worth taking.

“It caused a huge rift in the family because the science wasn’t behind it,” said Manley, who lives in Stuttgart, Germany, and whose wife, Heidi Mathis, also tested positive for the virus after a visit to New York. Both have since recovered, and the FDA has advised people not to take the drug outside a hospital or clinical trial.

The Manley family squabble highlights an essential question that many Americans are grappling with as they seek out the information they need to stay safe during the country’s worst public health crisis in a century: Whom do you trust?

Or, as Manley frames it: “What is being jammed down our throats in our news? Who is talking about these things? Where do you go to actually get something you can believe?”

Sixty-eight percent of Americans say they highly trust the information that the Centers for Disease Control and Prevention is providing about the virus, 66% trust their doctor or health care provider, and 52% said the same about their state or local government, according to a recent Associated Press-NORC Center for Public Affairs Research poll.

In interviews, Americans said the process of consuming, digesting and discerning the credibility of the fire hose of virus information coming from politicians, public health experts and the media — not to mention what their family, friends and colleagues are sharing on social media — has become a time-consuming and frequently unsettling process.

Gary Thomas, 71, a retiree from Pueblo, Colorado, and longtime news junkie, has become even more regimented in his consumption. He begins each day at the breakfast table, where he’ll spend a couple of solitary hours with his phone and coffee reading the latest virus news. He’ll later put in several more hours watching the latest developments on cable with his wife, while continuing to monitor newspaper apps and social media feeds.

Contrast that with Michele Cody, 45, a technology manager from Riverton, New Jersey. She’s become so worn down by the crush of information that she’s put herself on a news diet — giving up her early morning newscast and relying more on a roundup of coronavirus news pushed to her inbox.

Retiree Jana Foley decided the best way to get the information she needs out of  Trump’s briefings, and keep her blood from boiling, is through selective use of the mute button on her TV remote.

“When Trump is talking, we usually turn it down because we just get really upset and aggravated,” said Foley, 71, of Johnston, Iowa. “We turn it up when the experts are speaking.”

Vance Davis, 53, of Atlanta, finds himself frustrated with media coverage that he thinks is tinged with anti-Trump bias. In recent weeks, he said he’s stopped watching CNN and is now flipping between Fox News, the conservative One America News Network and Al Jazeera, the Qatar-headquartered network’s English newscast.

Davis said that much of the media has unfairly piled on Trump, overplaying things like the president’s musings that injecting disinfectant could be a cure for the virus. He said Trump could have handled the situation better by saying he misspoke instead of claiming he was being sarcastic.

Still, Davis said, he trusts the president “quite a bit.”

“Sometimes, he may grandstand too much, but you have to understand who he is and just suck it up,” he said.

Zach Stafford, 24, an AmeriCorps educator from Belleville, Illinois, watched the crisis unfold overseas and began to worry about the personal ramifications if it made it to the U.S.: His mother, Debra Mize, 61, has multiple sclerosis, an autoimmune disease that makes her more vulnerable if she catches the virus. He immediately realized that trustworthy information on the virus was crucial for preserving his mother’s well-being.

The two have since been glued to the news, watching Trump’s briefings and New York Gov. Andrew Cuomo’s morning updates, as well as Illinois Gov. J.B. Pritzker’s news conferences.

She’s found herself flustered arguing with friends on social media who are convinced that the virus — and the need for social distancing — is a hoax. One was insistent that 5G towers, the ones that create speedy internet connections, were to blame for the pandemic. There is no evidence of this.

“When she started using it to justify the fact that she wasn’t going to listen to the stay-at-home orders ... I just unfriended her,” Mize said.

In rural Clay County, Nebraska, Tim Lewis, an emergency manager for the county, said winning trust and persuading people to follow the state’s social distancing guidelines is a battle that sometimes needs to be waged one person at a time.

On a recent afternoon, Lewis was preparing to reach out to one of the county’s 6,200 residents who unnerved neighbors by telling them he had close contact with coronavirus-infected patients elsewhere in the state but saw no need to self-quarantine.

“This isn’t New York,” said Lewis, whose county has had nine people test positive for the virus. “But we’re trying to get people’s trust and help them understand this is a world thing.”

Fully 60% of respondents said Trump was not listening to health experts enough, while 35% said he was listening to them just the right amount.

Brian Haferkamp, a web developer from Maywood, Illinois, said he hasn’t put much trust in Trump’s rhetoric from the bully pulpit. Instead, Haferkamp, 42, said he’s been paying attention to guidance from state and local officials in Cook County, which has had more than 1,400 coronavirus-related deaths.

“In the end, I think our local government is where it’s going to come down and have the most practical meaning,” Haferkamp said.

Back in Germany, Manley is still spending much of his days reading and watching U.S. media coverage and tuning into White House and state officials’ briefings.

At the top of his mind is his wife, in the midst of her illness, telling him what she wanted him to do with her remains if she didn’t make it. A few weeks later, after he was diagnosed, he lay awake in the middle of the night, scared to fall asleep.

That visceral sensation of fear is something he wishes could be properly conveyed to Americans.

He says nothing — briefings, newscasts or friends — can prepare people for that moment “when it drives you to end-of-life conversations, and it drives you to not wanting to go to sleep because you don’t know if you’ll wake up.”

The AP-NORC poll of 1,057 adults was conducted April 16-20 using a sample drawn from NORC’s probability-based AmeriSpeak Panel, which is designed to be representative of the U.S. population. The margin of sampling error for all respondents is plus or minus 4 percentage points.