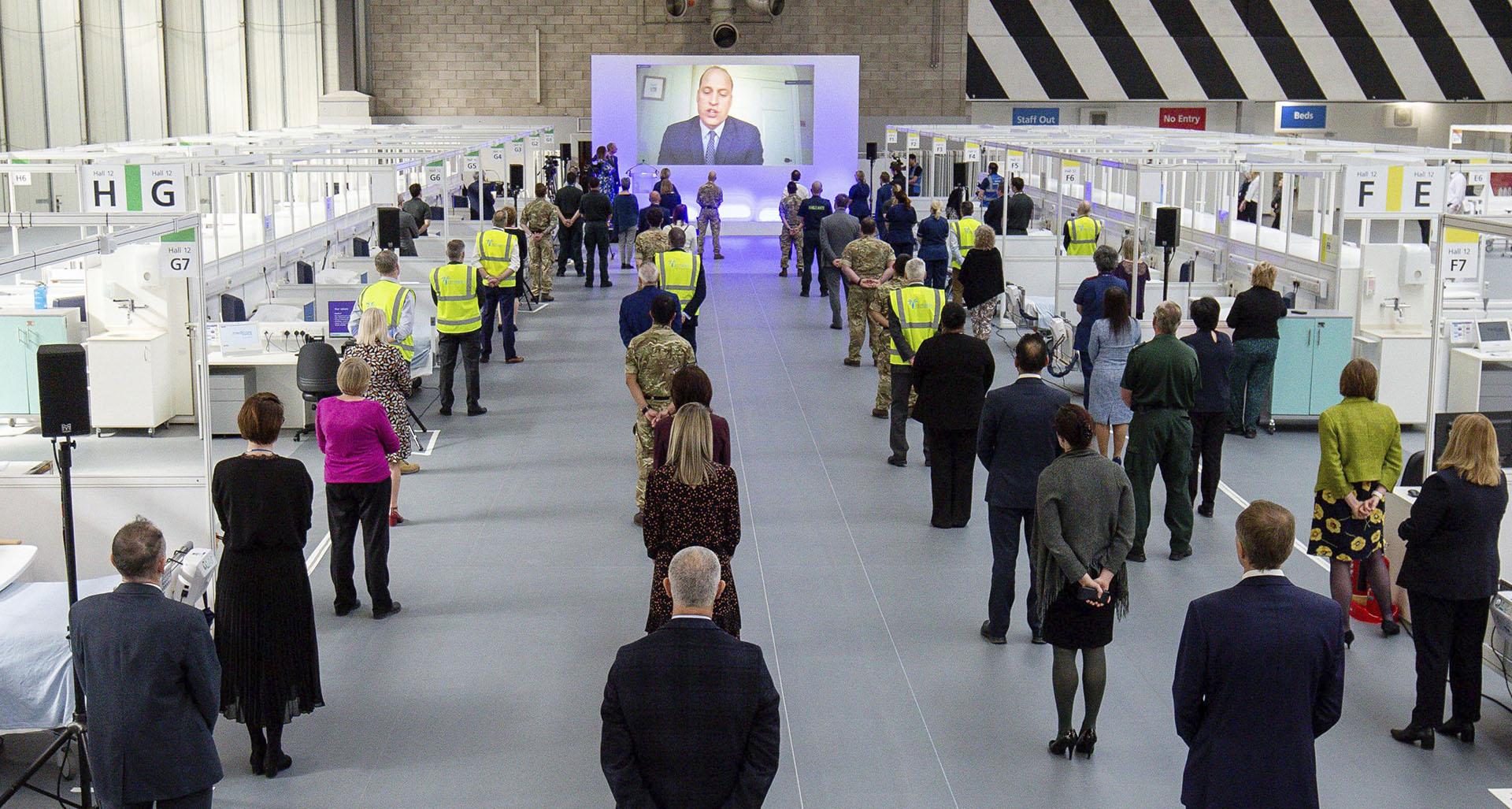 Britain’s Prince William speaks via videolink as he officially opens the NHS Nightingale Hospital Birmingham, in the National Exhibition Centre (NEC), England, Thursday April 16, 2020. The NHS Nightingale Hospitals have been built to provide extra beds for patients with coronavirus symptom as the UK continues in lockdown to help curb the spread of the disease. (Jacob King / Pool Photo via AP)

WASHINGTON (AP) — The ranks of America’s unemployed swelled toward Great Depression-era levels Thursday in an unprecedented collapse that intensified the push-pull from the White House on down over how and when to lift the coronavirus restrictions that have crippled the economy.

The government said 5.2 million more Americans applied for unemployment benefits last week, bringing the four-week total to about 22 million out of a work force of 159 million — easily the worst stretch of U.S. job losses on record. The losses translate to about 1 in 7 workers.

President Donald Trump planned to announce an easing of the nation’s social-distancing recommendations later in the day to allow states to reopen for business. While many Americans have chafed at the lockdowns and the damage to their livelihoods, others, including business leaders and governors, have warned that more testing and protective gear are needed first.

“My No. 1 focus is to keep my family safe, so I’m really not in a hurry to put an end to this,” said Denise Stockwell, who is about to lose her job in marketing at Cornell University in Ithaca, New York. “I wouldn’t want a misstep, which is why I get so enraged by what President Trump is saying.”

The outbreak has infected more than 2 million people worldwide and killed approximately 140,000, according to a tally by Johns Hopkins University, though the true numbers are believed to be much higher. The death toll in the U.S. topped 31,000, with over 600,000 confirmed infections.

The spread of the virus is declining in such places as Italy, Spain, France but is rising or continuing at a high level in Britain, Russia and Turkey, authorities said.

— The New York metropolitan area, the most lethal hot spot in the U.S., reported more encouraging signs. The number of people in the hospital with the virus dropped to around 18,000 statewide — well short of the apocalyptic projections — and new deaths were put at 600, compared with the mid- to high 700s last week. “We’ve controlled the beast. We’ve brought the rate of spread down,” Gov. Andrew Cuomo said.

While some leaders and citizens around the U.S. have called on government to reopen stores, factories and schools — especially in rural areas and other parts of the country that have not seen major outbreaks — health authorities and many politicians warned that returning to normal is a distant goal and that lifting restrictions too soon could allow the virus to come storming back.

The decisions rest not with the White House but with state and local leaders, who imposed the mandatory lockdowns and other restrictions over the past month.

Mayor Bill de Blasio of hard-hit New York City, with more than one-third of the nation’s coronavirus deaths, was among those urging caution.

“Everyone wants our economy to restart ... but there has to be a really clear understanding,” he said Thursday. “If we can’t provide the basics for our people, then you can kiss your recovery goodbye.”

The economic damage, meanwhile, escalated around the world.

In France, Amazon suspended operations after a court ruled it wasn’t doing enough to protect its workers in the country. The online retailer has six warehouses in France. In Britain, a government survey found that a quarter of companies had suspended business. Cargo traffic at Europe’s huge port of Rotterdam in the Netherlands sank more than 9% in the first quarter.

In the U.S., some economists said the unemployment rate could reach 20% in April, the highest since the Depression of the 1930s. Layoffs are spreading well beyond stores, restaurants and hotels to white-collar professionals such as software programmers and legal assistants.

Many European countries have likewise seen heavy job losses, but the social safety nets there are stronger. Government subsidy programs in places like Germany and France are keeping millions of people on payrolls instead of letting them go on unemployment,

Political leaders on the Continent are anxious to send people back to work and school and to rebuild devastated economies but are struggling to balance a country’s health and its wealth.

Italy’s hard-hit region of Lombardy is pushing to relaunch manufacturing on May 4, the day the national lockdown is set to end. Regional officials are considering ordering companies to stagger opening hours to avoid cramming public transportation.

Britain, with over 13,700 dead, extended its nationwide lockdown on schools, pubs, restaurants and most stores for at least three more weeks as health officials said the outbreak was nearing its peak, and the move appeared to have wide public support. Foreign Secretary Dominic Raab said, “Any change to our social distancing measures now would risk a significant increase in the spread of the virus.”

Swiss authorities announced a staggered series of reopenings, starting April 27 with medical and dental offices, hair salons and other select businesses, followed in May and June by other stores, schools, zoos, libraries and museums.

“Ladies and gentlemen, the transition is beginning,” Home and Health Minister Alain Berset said. “We want to go as fast as possible, and as slow as necessary.”

In the U.S., governors are facing vocal, and in some cases large, protests over their decisions to keep businesses closed, with demonstrators complaining that their livelihoods are being destroyed.

An estimated 3,000 to 4,000 people turned out this week to protest the Michigan governor’s restrictions, police broke up a demonstration in North Carolina that resulted in one arrest, and a rally was scheduled in Virginia on Thursday. Protests also took place in Oklahoma and Kentucky.

“This arbitrary blanket spread of shutting down businesses, about putting all of these workers out of business, is just a disaster. It’s an economic disaster for Michigan,” said protester Meshawn Maddock.

In New York, Cuomo said the current restrictions will be in place through May 15 and warned that any easing of the rules will require widespread testing, tracking of infected people, and other precautions.

“How do we unpause New York?” he said. “First, do no harm. Don’t let that infection rate go up. Don’t lose the progress that you have made.”

Other indicators suggested the worst has yet to come in some parts of the world.

Japan’s prime minister announced he would expand a state of emergency to the entire country, rather than just urban areas, as the virus continued to spread. Japan has the world’s oldest population, and the elderly are especially vulnerable to the coronavirus.

U.N. Secretary-General Antonio Guterres urged stepped-up preparations in Africa, warning that the continent “could end up suffering the greatest impacts.”