US Death Toll Closes in on Italy’s as Midwest Braces 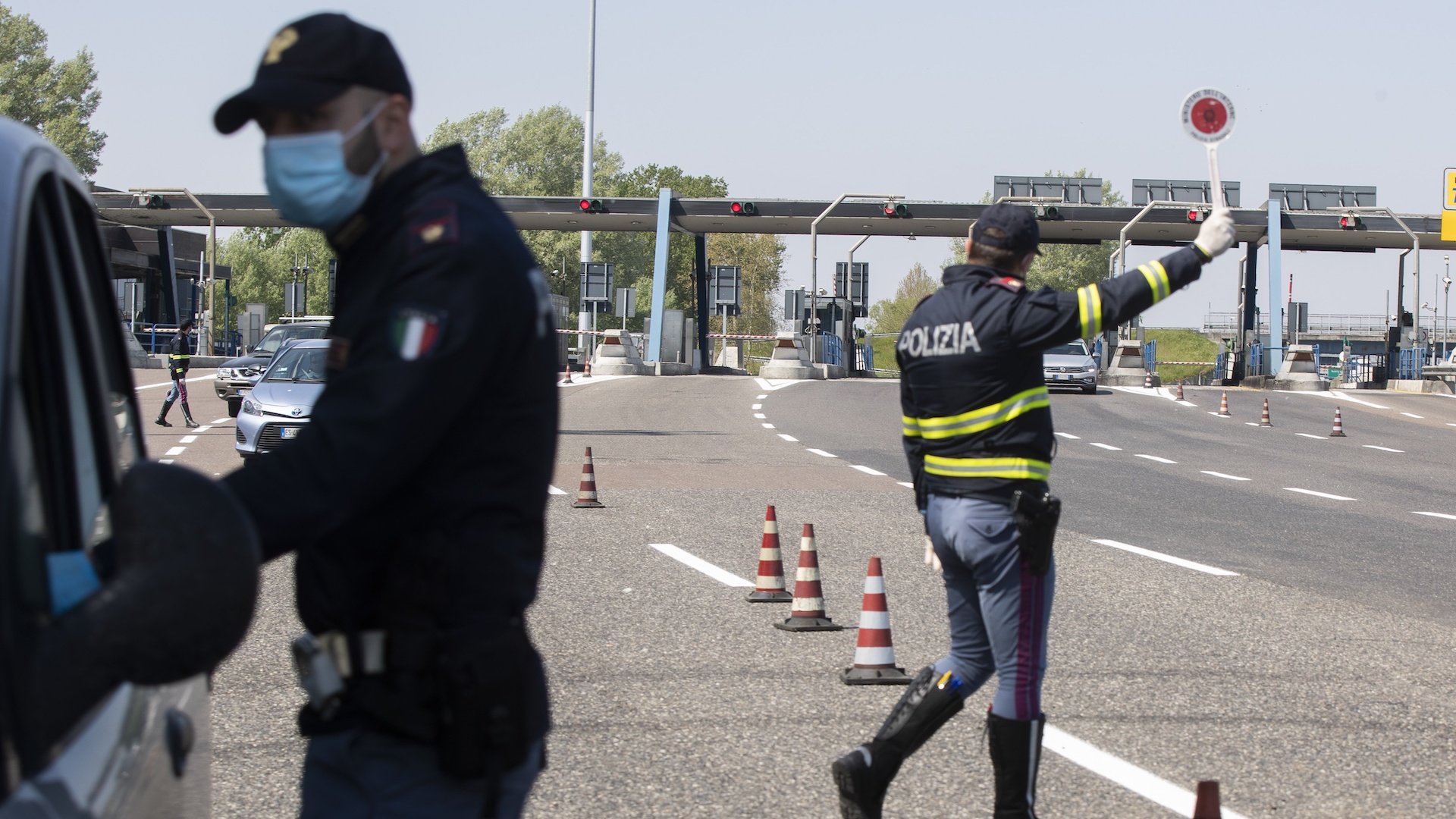 Police officers stop cars at the Melegnano highway barrier entrance, near Milan, Italy, Saturday, April 11, 2020. Using helicopters, drones and stepped-up police checks to make sure Italians don't slip out of their homes for the Easter holiday weekend, Italian authorities are doubling down on their crackdown against violators of the nationwide lockdown decree. (AP Photo/Luca Bruno)

CHICAGO (AP) – The U.S. death toll from the coronavirus briefly overtook Italy's for the highest in the world Saturday, according to the running tally kept by Johns Hopkins University.

The United States eclipsed Italy in reporting more than 18,850 dead around midday. A short time afterward, Italy reported a total of nearly 19,500.

Deaths have been declining in recent days in Italy while rising rapidly in the U.S.

The Johns Hopkins figures are based on data supplied by government health authorities around the world. The true numbers of dead and infected are believed to be much higher because of testing shortages, different counting practices and concealment by some governments.

With the New York metropolitan swamped with cases, fear mounted over the spread of the virus into the nation's heartland. Twenty-four residents of an Indiana nursing home hit by COVID-19 have died. Chicago's Cook County has set up a temporary morgue that can take more than 2,000 bodies. And Chicago Mayor Lori Lightfoot has been going around telling groups of people to “break it up.”

Around the world, meanwhile, European countries used roadblocks, drones, helicopters, mounted patrols and the threat of fines to keep people from traveling over Easter weekend. And with infections leveling off in Italy, Spain and other places on the Continent, governments took tentative steps toward loosening the weeks-long shutdowns of much of public life.

“Don’t do silly things,” said Domenico Arcuri, Italy’s special commissioner for the virus emergency. “Don’t go out, continue to behave responsibly as you have done until today, use your head and your sense of responsibility.”

Italian authorities set up roadblocks on main thoroughfares in and out of Milan and along highway exits to discourage people from going on holiday trips. British police kept a close watch on gatherings in parks and at the seaside on what was set to be the hottest day of the year. France deployed some 160,000 police, including officers on horseback who patrolled beaches and parks.

“It’s useless to pack your bags for a vacation,” the Paris police headquarters tweeted.

The pandemic’s center of gravity has long since shifted from China to Europe and the United States, which now has by far the largest number of confirmed cases, with more than half a million.

As of midday Saturday, the U.S. death toll was just short of Italy’s, which stood at about 18,850. About half the deaths in the United States were in the New York metropolitan area, where hospitalizations were nevertheless slowing down and other indicators suggested social distancing is “flattening the curve” of infections.

But with authorities warning that the crisis in New York is far from the over, the city announced that its 1.1 million-student school system will remain closed for the rest of the academic year.

Some countries are already planning small first steps out of the shutdown, even as public health authorities warned the virus could come back with a vengeance if people aren't careful enough.

Austria aims to reopen small shops on Tuesday. Spain, with more than 16,300 dead, plans to start rolling back the strictest of its measures Monday, when it will allow workers in some nonessential industries to return to factories and construction sites after a nearly complete two-week stoppage.

“We think that with these measures we will prevent a jump in infections,” Health Minister Salvador Illa said.

Italy continued to include all nonessential manufacturing in an extension of its national lockdown until May 3. But Premier Giuseppe Conte held out hope that some industry could re-open earlier if conditions permit.

Arcuri said that the exit from the lockdown will include increased virus testing, the deployment of a voluntary contact-tracing app and mandatory blood tests as Italy seeks to set up a system of ‘’immunity passports.’’

India extended its lockdown of the nation of 1.3 billion people by two more weeks. But Iran reopened government offices and businesses outside the capital after a brief nationwide lockdown to help contain the worst outbreak in the Middle East. Businesses in Tehran will be allowed to reopen next weekend.

Britain on Saturday reported 917 more deaths, down from the peak of 980 recorded a day earlier. The country’s overall death toll neared 10,000. At the same time, data suggest that the number of hospital admissions in Britain is leveling off.

Prime Minister Boris Johnson, the first major world leader confirmed to have COVID-19, continued to recover at a London hospital, where he was able to take short walks between periods of rest, according to his office.

Worldwide, confirmed infections rose above 1.7 million, with over 100,000 deaths, according to a tally by Johns Hopkins University. Close to 400,000 people have recovered.

For most people, the coronavirus causes mild or moderate symptoms, such as fever and cough. But for others, especially older adults and people with health problems, it can cause severe symptoms like pneumonia.