Worldwide Deaths From the Coronavirus Hit 100,000 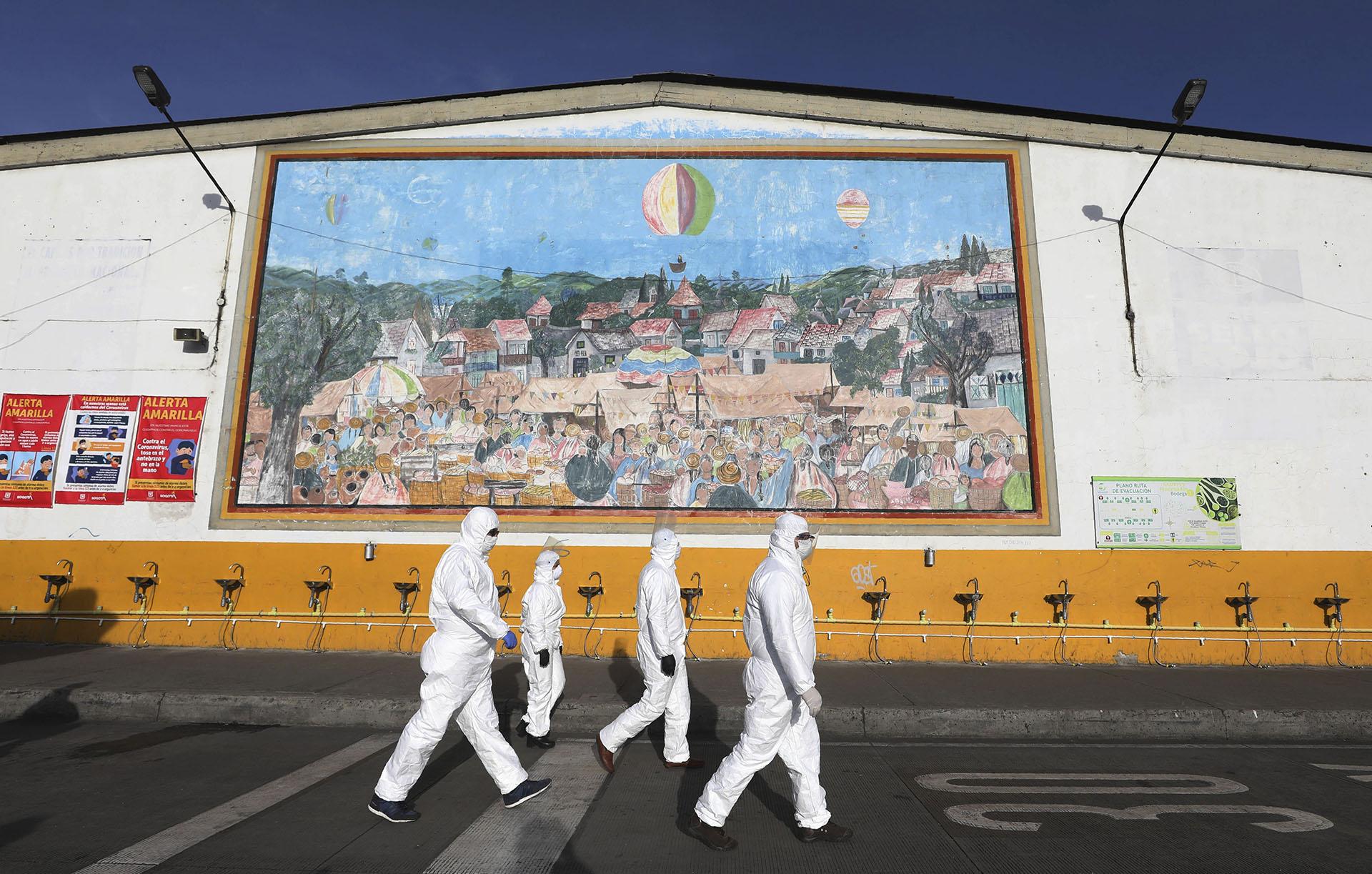 Workers in protective body suits walk past sinks for hand washing at the “Corabastos,” one of Latin America’s largest food distribution centers, as they work to disinfect it to help contain the spread of the new coronavirus in Bogota, Colombia, Friday, April 10, 2020. (AP Photo / Fernando Vergara)

NEW YORK (AP) — The worldwide death toll from the coronavirus hit 100,000 as Christians around the globe marked a Good Friday unlike any other — in front of computer screens instead of in church pews — and some countries tiptoed toward reopening segments of their battered economies.

Around the world, public health officials and religious leaders alike warned people against violating the lockdowns and social distancing rules over Easter and allowing the virus to come storming back. Authorities resorted to roadblocks and other means to discourage travel.

In Italy, officials employed helicopters, drones and stepped-up police checks to make sure residents didn’t slip out of their homes. On Thursday alone, police stopped some 300,000 people around Italy to check whether they had permission to travel. About 10,000 were issued summonses.

Some churches held services online, while others arranged prayers at drive-in theaters. Fire-scarred Notre Dame Cathedral came back to life briefly in Paris, days before the first anniversary of the April 15 inferno that ravaged it. Services were broadcast from the closed-to-the-public cathedral.

The holiday observances came as the worldwide number of deaths tracked by Johns Hopkins University hit a bleak milestone of 100,000 since late December, when the outbreak emerged in China. More than 1.6 million people around the globe have been infected, by the university’s count.

The true number of lives lost is believed be much higher because of limited testing, cover-ups by some governments, and different counting practices. For example, in places like New York, Italy and Spain, many victims who died outside a hospital — say, in a home or a nursing home — have not been counted.

Deaths in the U.S. reached about 18,000, putting it on track to overtake Italy as the country with the highest death toll, and about a half-million Americans were confirmed infected. More than 40% of the dead in the U.S were in New York state. Still, there were signs of hope.

New York state reported 777 new deaths, down slightly from the day before, for an overall toll of more than 7,800.

“I understand intellectually why it’s happening,” Gov. Andrew Cuomo said. ““It doesn’t make it any easier to accept.”

But state officials said the number of people in intensive care dropped for the first time since mid-March and hospitalizations are slowing: 290 new patients in a single day, compared with daily increases of more than 1,000 last week.

Cuomo said if the trend holds, New York might not need the overflow field hospitals that officials have been scrambling to construct.

“There is a light at the end of the tunnel,” said Dr. Jolion McGreevy, medical director of Mount Sinai Hospital’s emergency department. “It’s getting better, but it’s not like it’s going to just drop off overnight. I think it’s going to continue to slowly decline over the next weeks and months.”

With the pandemic slamming economies, the head of the International Monetary Fund warned that the global economy is headed for the worst recession since the Depression.

In Europe, the 19 countries that use the euro currency overcame weeks of bitter divisions to agree on spending $550 billion to cushion the recession caused by the virus. Mario Centeno, who heads the eurozone finance ministers’ group, called the package “totally unprecedented. ... Tonight Europe has shown it can deliver when the will is there.”

As weeks of lockdowns were extended in nation after nation, governments were pressed to ease restrictions on key businesses and industries.

After a two-week freeze on all nonessential economic activity, Spain decided to allow factories and construction sites to resume work on Monday, while schools, most shops and offices will remain closed. Spanish authorities said they trust that the move won’t cause a significant surge in infections.

The head of the World Health Organization, Tedros Adhanom Ghebreyesus, warned that a premature lifting of restrictions could “lead to a deadly resurgence.”

In Italy, the industrial lobbies in regions representing 45% of the country’s economic output urged the government to ease its two-week lockdown on all nonessential manufacturing, saying the country “risks definitively shutting down its own motor, and every day that passes the risk grows not to be able to restart it.’’

Italy reported 570 additional deaths for a running total of more than 18,800 but said the number of hospital admissions is falling along with the number of patients in intensive care.

In the Kenyan capital of Nairobi, people desperate for food stampeded, pushing through a gate at a district office in the Kibera slum. Police fired tear gas, injuring several people.

In Japan, the world’s third-largest economy, many have criticized Prime Minister Shinzo Abe as being too slow to act against the pandemic. In a rare rebuke, the Japanese prefecture of Aichi, home to the Toyota car company, declared its own state of emergency, saying it cannot wait for the government.

“The situation is critical,” said Aichi Gov. Hideaki Omura. “We decided to do everything we can to protect Aichi residents’ lives and health.”

Japan has the world’s oldest population, and COVID-19 can be especially serious for the elderly.

In some of the worst-hit countries, Italy and Spain, new infections, hospitalizations and deaths have been leveling off. But the daily tolls remain shocking.

The 605 new deaths announced in Spain were the lowest in more than two weeks. The coronavirus has claimed more than 15,800 lives there, though the rates of contagion and deaths are dropping.

Britain recorded 980 new deaths, its highest daily total, for close to 9,000 in all.

British Prime Minister Boris Johnson was moved out of intensive care on Thursday after spending three nights there being treated for the virus. The 55-year-old remained hospitalized in London. His father, Stanley Johnson, said the prime minister needs to “rest up” before returning to work.