We Found the Woman Behind #SpritzersWithPritzker 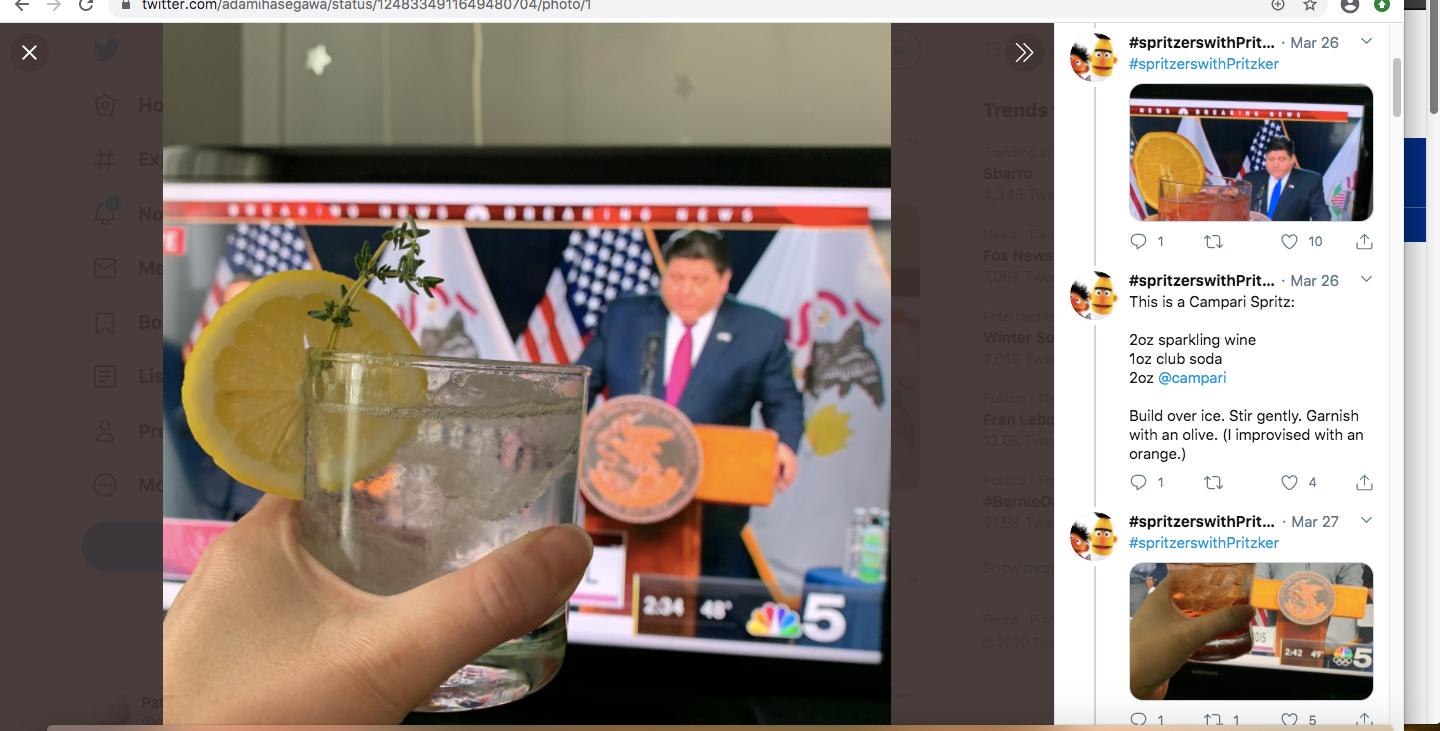 Gov. J.B. Pritzker’s daily press briefings during the COVID-19 outbreak have been sobering affairs, but he opened Thursday’s news conference on a lighter note.

“A special cheers to the Forest Park resident who tweets every day that he (sic) has faithfully enjoyed a cocktail or a mocktail during this press conference every afternoon since March 26. So know that your hashtag ‘SpritzersWithPritzker’ has brought a smile to the governor’s office staff, and lots of people seem to appreciate you tweeting the drink recipes too. So thank you.”

Watching, with spritzer reliably in hand, was the Forest Park tweeter herself, Kimberly Adami-Hasegawa.

The shout-out was completely unexpected, said Adami-Hasegawa, a greeting card designer and office administrator for an Oak Park church.

“I screamed,” she said. “It made me laugh.” Even the gender mix-up. She’s often mistaken for “Adam” thanks to her Twitter handle of @adamihasegawa, she said.

Coming up with a daily drink — or mocktail on days when she’s working at home — has given Adami-Hasegawa, who said she comes from a family of cocktail lovers, something to look forward to while quarantining at home with her husband, Naoto Hasegawa.

Her favorites to date have been a spirits-free combination of grapefruit and ginger, and, on the boozier side, an Americano — a classic cocktail made with Campari, soda and sweet vermouth. All of which helps make the daily news a bit easier to swallow.

“Does it make it sound like I’m taking this less to heart? It does add a little bit of levity to living through this, but no, I’m taking it very much to heart,” she said.

Her nightly cocktail research has in truth been a much-needed distraction for Adami-Hasegawa. Though she’s been able to self-isolate at home, Naoto’s job at Trader Joe’s has unexpectedly placed him on the frontlines of the pandemic.

“He’s very exposed,” she said. “They’ve handled it well but I feel like I wish that they had started a lot of the protocols right at the beginning. Now they’re limiting the people in the store, the staff are wearing masks, there’s plexiglass at the registers, but yeah, it’s a little bit stressful. It’s challenging for everybody. What else are you going to do?”

As she raises a spritzer with Pritzker every day, Adami-Hasegawa said she’s grown increasingly impressed with a governor she voted for more out of party loyalty than any conviction regarding his credentials.

“When this all started, I didn’t know how he would handle this. I feel like he’s done a good job. I don’t think he has gotten enough credit for shutting things down earlier than later,” she said.

“I appreciate that the governor is using science. I appreciate that Dr. Ezike [Ngozi Ezike, director of the Illinois Department of Public Health] is up there every single day giving her reports. He always has an array of people with him who are sharing their expertise. It’s not just the governor’s show,” Adami-Hasegawa said. “I feel like I am learning a lot from some of the scientists.”

As long as Pritzker keeps up his daily appearances, Adami-Hasegawa is determined to tune in and raise a glass in solidarity, though she worries that she’ll run out of new spritzer ideas if the stay-at-home order is extended.

And the pressure is on now that she’s been called out on live television, she joked.

our Governor is cooler than your governor #SpritzersWithPritzker#ThursdayThoughts @GovPritzker pic.twitter.com/ZGRZd0exhb