Wisconsin Voters Wait For Hours, Others Stay Home Amid Virus

Video: Paris Schutz reports on election day in Wisconsin from the city of Kenosha, just north of the Illinois-Wisconsin border.

MADISON, Wis. (AP) — Despite federal health recommendations, thousands of Wisconsin voters waited hours in long lines outside overcrowded polling stations on Tuesday so they could participate in a presidential primary election that tested the limits of electoral politics in the midst of a pandemic.

Thousands more stayed home, unwilling to risk their health even as Republican officials pushed forward with the election amid a stay-at-home order. But many of the potential voters who remained in their homes complained that the absentee ballots they had requested never showed up.

Pregnant and infected with the coronavirus, 34-year-old Hannah Gleeson was still waiting Tuesday for the absentee ballot that she requested last week.

“It seems really unfair and undemocratic and unconstitutional, obviously,” said Gleeson, who works at an assisted-living center in Milwaukee. “It seems really absurd. And I think it’s voter suppression at its finest.”

The race pitted the Democratic and Republican parties against each other over central questions about how elections should be managed in a crisis. Democrats complained that the state was risking the health of its citizens by not postponing the election. Republicans insisted that the election should go on as scheduled — including voting for a pivotal state Supreme Court seat.

The chaos in Wisconsin, a premiere general-election battleground, underscored the lengths to which the coronavirus outbreak has upended politics as Democrats seek a nominee to take on President Donald Trump this fall. As the first state to hold a presidential primary contest in three weeks, Wisconsin became a test case for dozens of states struggling to balance public health concerns with voting rights.

Joe Biden hopes the state will help deliver a knockout blow to Bernie Sanders in the nomination fight, but the winner of Tuesday’s contest may be less significant than Wisconsin’s decision to allow voting at all. Its ability to host an election during a growing pandemic could have significant implications for upcoming primaries and even the fall general election.

Results were not expected Tuesday night. A court ruling appeared to prevent results from being made public earlier than next Monday.

After several hours of voting, there were signs that the Wisconsin test was not going well.

The state’s largest city operated just five of its 180 traditional polling places, forced to downsize after hundreds of poll workers stepped down because of health risks. The resulting logjam forced voters to wait together in lines spanning several blocks in some cases. Many did not have facial coverings. 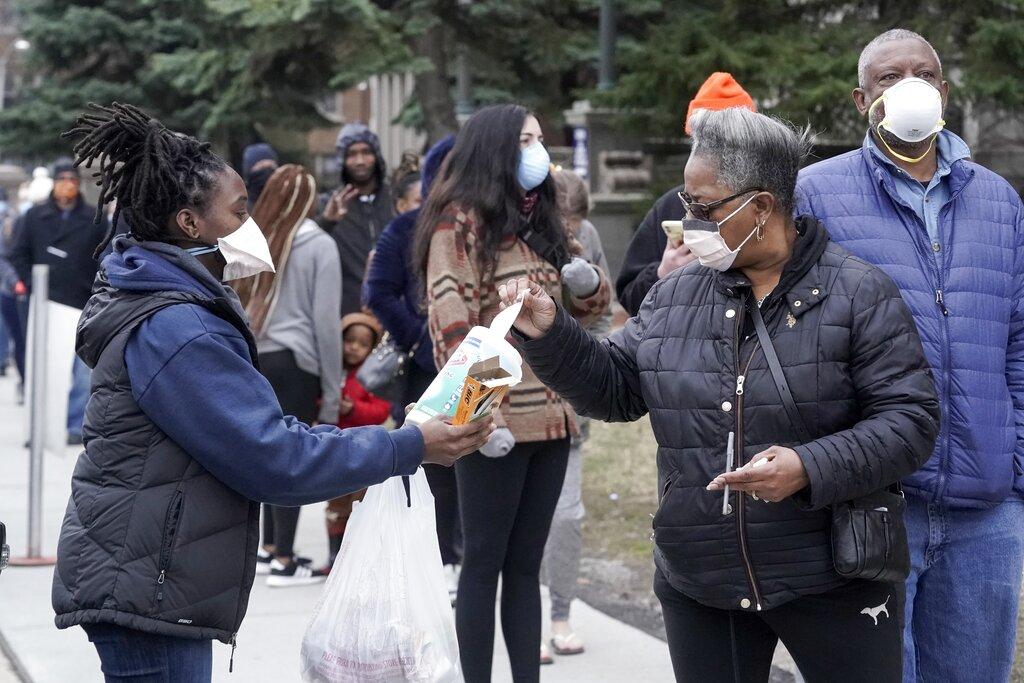 The election complications had a racial component.

Milwaukee is home to the state’s largest concentration of black voters, a community that has been hit harder than others during the pandemic. Reduced minority turnout would benefit Republicans in a series of state and local elections.

Michael Claus, 66, was among the many voters who risked their health to vote. Claus, who is black, wore a protective mask and a Tuskegee Airmen cap.

He said he tried to vote absentee and requested a ballot in March, but it never showed up. His only option was to vote in person. He blamed the Republican-controlled state legislature.

“They could have delayed the election with no problem,” Claus said. “They decided if they can suppress the vote in Milwaukee and Madison, where you have a large minority presence, you can get people elected you want elected. And that’s sad.”

Democrats in and out of Wisconsin screamed for the contest to be postponed, yet Republicans — and the conservative-majority state Supreme Court — would not give in. The fight over whether to postpone the election, as more than a dozen states have done, was colored by a state Supreme Court election also being held Tuesday. A lower turnout was thought to benefit the conservative candidate.

Trump on Tuesday broke from health experts who have encouraged all Americans to stay home by calling on his supporters to “get out and vote NOW” for the conservative judicial candidate, Daniel Kelly.

He reiterated his support for Kelly later in the day and suggested Democrats were playing politics by trying to postpone the election.

Wisconsin has reported more than 2,500 coronavirus infections and 92 related deaths — 49 of them in Milwaukee County, where the voting lines were longest. 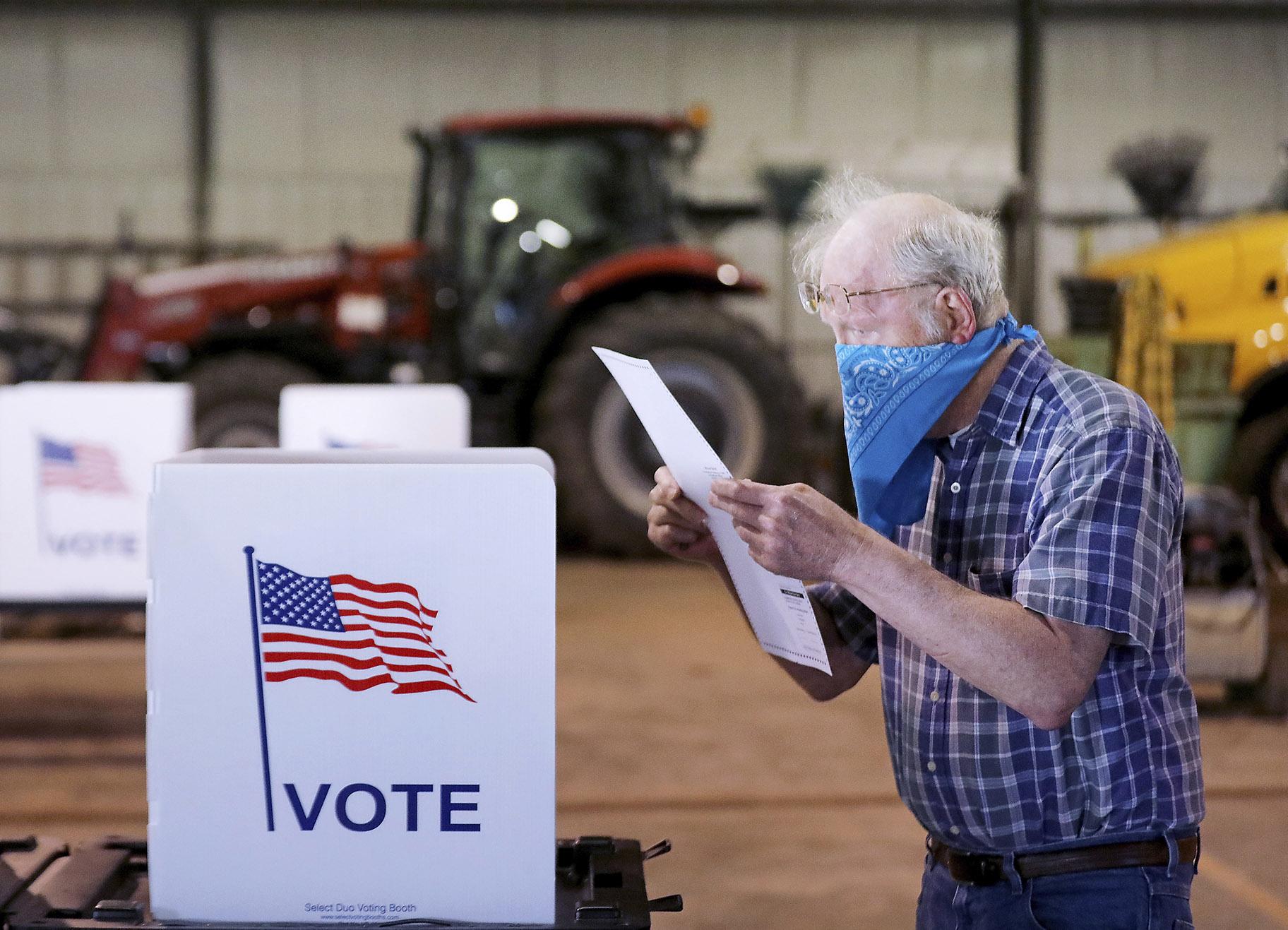 The unprecedented challenge created a chaotic scenes across the state — and a variety of health risks for voters and the elected officials who fought to keep polls open.

They included Robin Vos, the Republican speaker of the state Assembly who joined more than 2,500 National Guard troops dispatched to help staff voting stations. While many voters standing in lines for more than an hour did not have protective equipment, Vos donned a face mask, safety glasses, gloves and a full protective gown.

In Madison, city workers erected plexiglass barriers to protect poll workers, and voters were encouraged to bring their own pens to mark the ballots.

On the eve of the election, it was unclear whether in-person voting would happen at all.

Wisconsin Gov. Tony Evers issued an executive order Monday afternoon to postpone the election. Hours later the state Supreme Court sided with Republicans, who said Evers didn’t have the authority to reschedule the race on his own.

Conservative justices on the U.S. Supreme Court followed with a 5-4 ruling that overturned a lower court’s decision expanding absentee voting.

With the U.S. Supreme Court decision, voters were given no extra time for absentee voting. The court said absentee ballots must be hand-delivered by Tuesday evening or postmarked by Tuesday, although they can arrive at clerks’ offices as late as next Monday.

Christopher Sullivan, a 35-year-old high school teacher from western Wisconsin, said two police officers greeted voters outside his polling site in Holmen, while two members of the county health department instructed him to wash his hands in a makeshift sink inside.

In another room, Sullivan was told to take one of the pens on a table spaced 6 inches apart and not give it back. He was given his ballot by “an elderly lady wearing a mask and gloves sitting behind a glass wall.”

“I have voted many times in my life (and at this location) and have never experienced something so eerie,” Sullivan said.

‘This Is Not Going to be the Hunger Games’: Chicago to Get Plenty of COVID-19 Vaccine for Kids, Top Doc Says