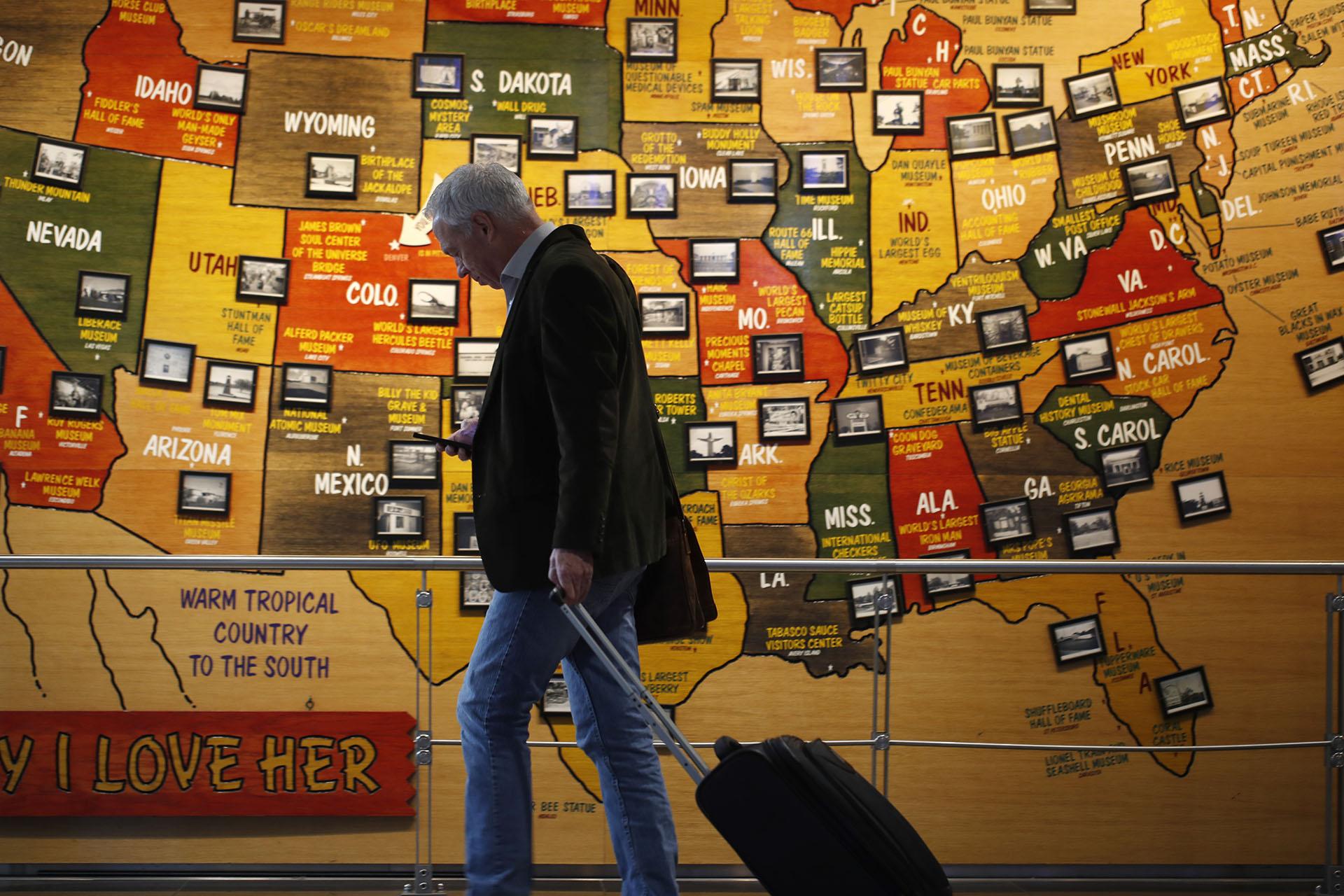 In this March 18, 2020 photo, a traveler checks his mobile telephone while passing a map of the United States on the way to the security checkpoint in the main terminal in Denver International Airport. (AP Photo / David Zalubowski)

CHICAGO (AP) — Concern among Americans that they or a loved one will be infected by the coronavirus rose dramatically in the past month, with two-thirds of the country now saying they’re at least somewhat concerned about contracting the COVID-19 illness.

That’s up from less than half who said so in February. Still, a new poll from The Associated Press-NORC Center for Public Affairs Research finds that about 3 in 10 Americans say they’re not worried at all about the coronavirus.

And while the survey found that most say they’re taking at least some actions to prevent the disease from spreading, experts say it also shows the country is not doing all of what’s needed to reduce infections, such as canceling travel.

“Some set of people is still going about their daily lives, and that needs to change pretty rapidly,” said Caroline Pearson, a senior vice president at NORC at the University of Chicago and a health policy expert. “Now they need to do the hard things, not just the easy things that don’t disrupt their life.”

The poll found that younger adults have greater concerns about the coronavirus than older Americans, with 43% of adults under 30 being very worried, compared with 21% of those age 60 and over. Pearson said that may be because younger people are more likely to feel uncertain about jobs or health insurance or to worry about older family members like parents or grandparents.

That disparity by age does not match the threat posed by the virus. Deaths to date in the U.S. mirror the experience in other countries, with about 4 out of 5 fatalities occurring in people 65 and older, and no deaths in children, according to the Centers for Disease Control and Prevention.

While the poll found that about 3 in 10 Americans say they’re highly worried about the illness, about the same number are unconcerned — with 7% saying they were not taking any of the prevention measures asked about in the poll, including more frequent hand washing or staying away from large groups.

“We do need that 33% to change if we’re going to keep this under control as much as possible,” Richards said, adding that “maybe that 7% of people are already excellent hand washers, but I doubt it.”

Public health officials have urged people to do their part to slow the spread of the virus before hospitals and other health facilities are overwhelmed. Schools and sporting events have been canceled, and restaurants and Las Vegas casinos closed. President Donald Trump’s administration said Monday that people should avoid social gatherings with groups of more than 10 people.

On Saturday, Trump expanded European travel restrictions due to the global pandemic, telling Americans, “If you don’t have to travel, I wouldn’t do it.” The CDC has advised that travelers are more likely to get infected if they go to a destination where the virus is spreading and in crowded settings such as airports.

The poll was conducted March 12-16, when information about the virus was changing rapidly, as was the Trump administration’s reaction to it. Trump declared the pandemic a national emergency on March 13, making up to $50 billion available for local and state governments to respond to the crisis, and announced a range of executive actions aimed at expanding testing for the virus. The administration also started work on a $1 trillion aid and stimulus plan.

Richards said she’s hopeful the numbers of Americans worried about the coronavirus would be higher in a poll conducted entirely after Trump declared the national emergency. Still, she said she’s been troubled by people who don’t seem to be taking the warnings seriously, including those she’s seen in images of crowded Florida beaches.

For most people, COVID-19 causes only mild or moderate symptoms, such as fever and cough. It can cause more severe illness, including pneumonia, for some people, especially older adults and those with existing health problems. Most people recover — those with mild illness in about two weeks, while those with more severe illness may take three to six weeks, according to the World Health Organization.

The AP-NORC poll of 1,003 adults was conducted March 12-16 using a sample drawn from NORC’s probability-based AmeriSpeak Panel, which is designed to be representative of the U.S. population. The margin of sampling error for all respondents is plus or minus 4.3 percentage points.