Four states had been scheduled to hold Democratic presidential primaries on Tuesday amid a global outbreak of the novel coronavirus, but leaders in Ohio called off their election, citing public health concerns. Arizona, Illinois and Florida say they’re going ahead with plans to vote. Here are five questions ahead of voting:

WILL THE ELECTIONS TAKE PLACE?

Nothing is certain in the age of the coronavirus. Three states scheduled to vote after Tuesday postponed their primaries. Ohio scrapped its Tuesday vote, while Arizona, Florida and Illinois vowed to push ahead.

For most people, the new coronavirus causes only mild or moderate symptoms, such as fever and cough. For some, it can cause more severe illness, including pneumonia. The vast majority of people recover from the new virus. 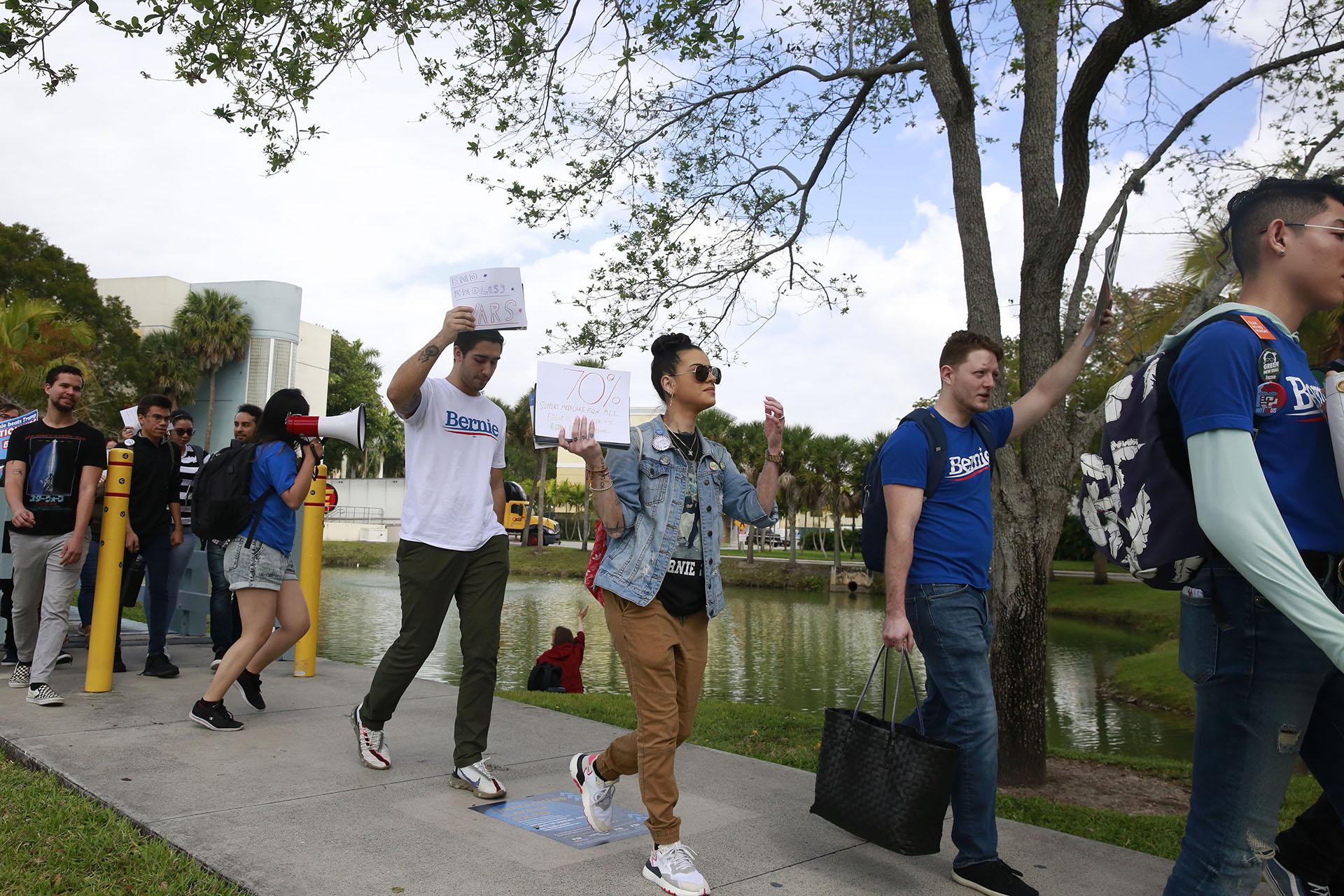 Students chant during the Bernie 2020 March to Early Vote at Florida International University to on Wednesday, March 11, 2020, in Miami. Florida and its 219 delegates could be the knockout punch for presidential hopeful Bernie Sanders after a dismal showing in the Michigan primary. (AP Photo / Brynn Anderson)

With voting still on in some states, who turns out? Turnout has surged in recent Democratic contests as a wave of suburban voters helped catapult former Vice President Joe Biden to his solid lead in the race.

All of the states allow early voting, so there is a good chance that many people cast ballots remotely by mail. Still, it wouldn’t be a surprise if turnout drops significantly.

CAN BIDEN KEEP PULLING AWAY?

Biden vaulted to his front-runner position on March 3, also known as Super Tuesday, and has never looked back. He added to his advantage in last week’s primaries, besting Sanders in key states like Michigan and Missouri and dominating in Mississippi, where Biden’s base of black voters gave him a massive delegate haul.

It’s exceedingly difficult for Sanders to catch up with Biden at this point because the Democratic Party’s rules award delegates proportionally. That means that even if the Vermont senator won the states up for grabs on Tuesday, he’d split their delegates with Biden.

CAN BIDEN REPAIR HIS STANDING WITH LATINOS?

Sanders is in a tough position, but he’s made one noteworthy addition to his coalition — Latinos, who powered Sanders to wins in California and Nevada. Latino voters tend to be younger, and Sanders’ support is largely youthful. But some Democratic Latinos are angry at the heavy pace of deportations under the Obama administration.

Biden has taken steps to make up for that. He has joined Sanders in a pledge to suspend deportations for his first 100 days. Three of the four states that had been scheduled to vote Tuesday have sizable Latino populations, and Florida, heavy with Cuban immigrants, may be an especially bad match for Sanders, a self-described democratic socialist.

WILL TUESDAY BE CONCLUSIVE?

Tuesday’s elections were already well underway with early voting before the full force of the coronavirus outbreak hit the U.S. But that’s not true of the half of the states that have still yet to cast ballots. Some could shift to mail-in contests; others, like Louisiana, have delayed their contests until June 22, after the traditional close of the nominating period. It’s unclear, though, that there will be more days of large-scale voting.

Although Biden has assembled a strong coalition, there’s still a significant split as liberal and especially younger voters overwhelmingly stick with Sanders. If the primary effectively ends Tuesday, can these voters be brought back into the fold? Or will Biden have to turn his attention to President Donald Trump in the general election without significant chunks of his party?