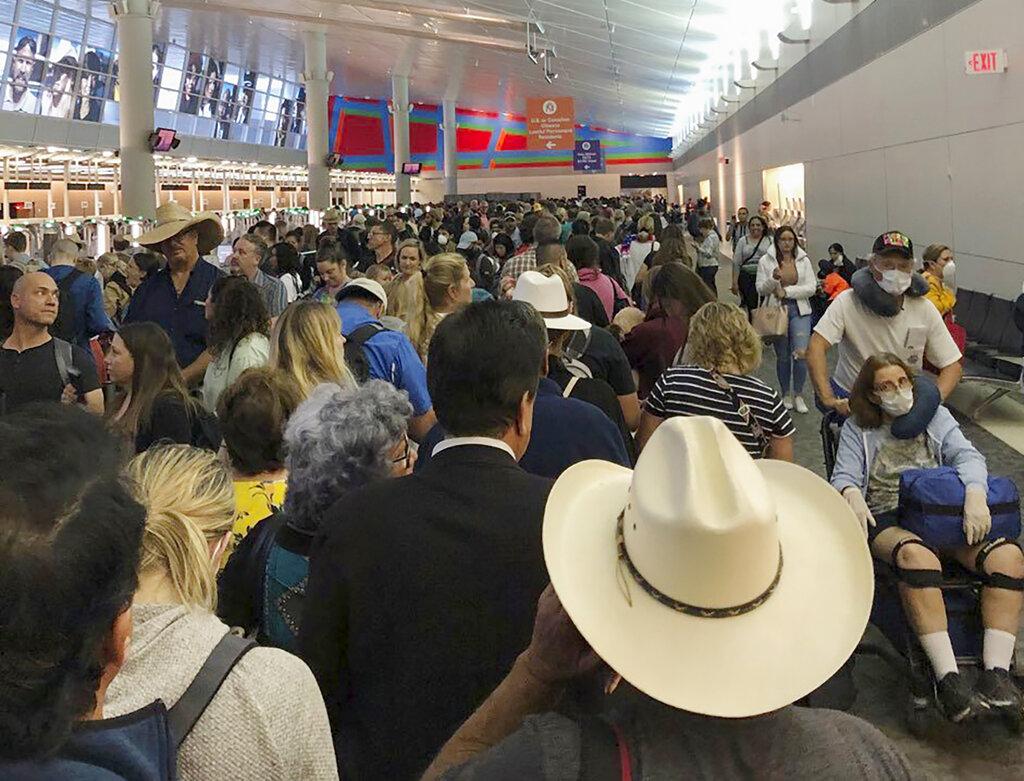 In this photo provided by Austin Boschen, people wait in line to go through the customs at Dallas Fort Worth International Airport in Grapevine, Texas, Saturday, March 14, 2020. (Austin Boschen via AP)

Weary travelers returning to the U.S. amid coronavirus-related travel restrictions are being greeted by long lines and hourslong waits for required medical screenings at airports.

The dense crowds at 13 airports where travelers from Europe are being funneled — among the busiest across the country — formed even as public health officials called for “social distancing” to stem the spread of the pandemic.

Austin Boschen was returning from a spring break trip to Jalisco, Mexico, with his girlfriend and described the situation at Dallas/Fort Worth International Airport as “atrocious, no semblance of a line beyond the barriers and no officials or staff around to direct.”

He and his girlfriend managed to get near the front of the crowd and learned people there had already been waiting for two hours, he wrote in an email; he reached the head of the line 2 1/2 hours later, and then waited another hour and a half to see an agent.

“The entire time people in the crowd would yell out in anger, and Customs officers would yell at people to not take pictures,” he wrote. “Short chants among the room would start and stop periodically. It was very tense at times, the crowd was very agitated.”

In the end, he and his girlfriend missed their original flight, and then missed a rebooked flight, finally managing to catch a third after racing across the airport.

“I’m less concerned about having to stand here for the amount of time that I am, and more concerned about where the people are traveling from that are around me and what they may or may not have been exposed to,” another traveler, Dorothy Lowe, told WFAA-TV at Dallas/Fort Worth.

Gov. J.B. Pritzker tweeted at President Donald Trump and Vice President Mike Pence, noting that the customs process is under federal jurisdiction and demanding they take action to address the crowds. His concerns were echoed on Twitter by his fellow Democrats, Illinois Sens. Dick Durbin and Tammy Duckworth.

The Trump administration should have bolstered staffing at the receiving airports in anticipation of long lines, Pritzker said Sunday on ABC’s “This Week,” but instead passengers “were flooding into O’Hare Airport, they were stuck in a small area, hundreds and hundreds of people, and that’s exactly what you don’t want in this pandemic.”

Sunday, he said, “its going to be even worse.”

While U.S. citizens, green card holders and some others are allowed to return home, travelers from Europe are being funneled to the 13 airports where they are subject to health screenings and quarantine orders.

Acknowledging the long lines at those airports in tweets posted just after midnight, the Department of Homeland Security’s acting secretary said the screenings take about a minute per passenger.

“Right now we are working to add additional screening capacity and working with the airlines to expedite the process,” Chad Wolf tweeted. “I understand this is very stressful. In these unprecedented times, we ask for your patience.”

Packing travelers into narrow hallways and long lines will elevate their risk of exposure. Some experts have questioned the effectiveness of travel restrictions because of the heavy volume of global travel.

Holes in the containment net may alarm the general public, but experts in controlling outbreaks expect some will slip through. The point is to slow down rates of infection to keep the number of severely sick patients from overwhelming hospitals. 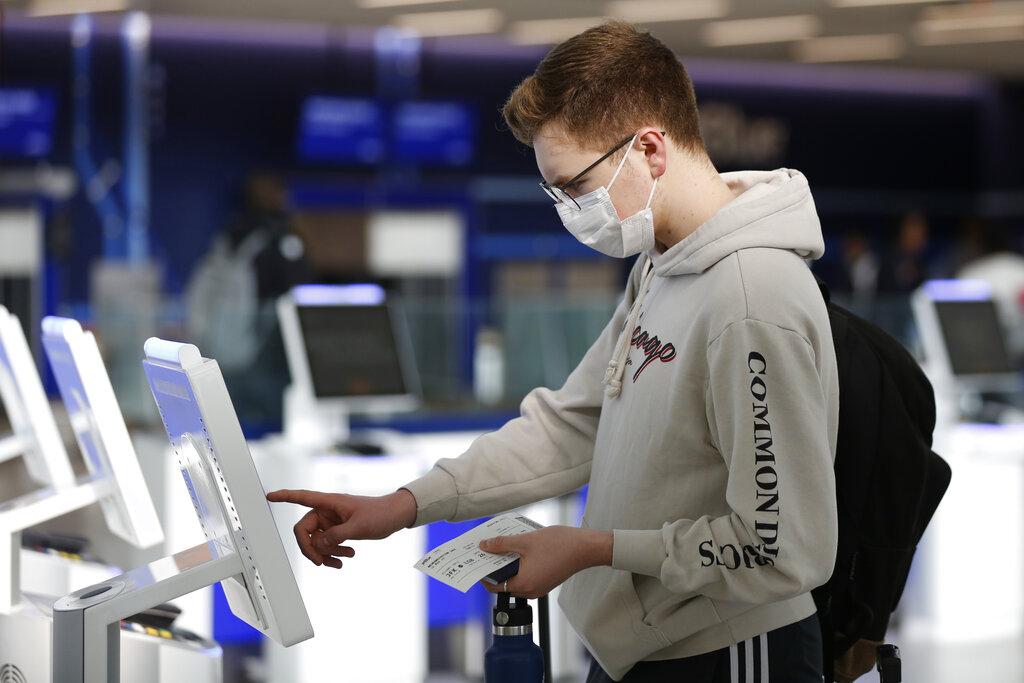 Dr. Anthony Fauci, the government’s top infectious disease expert, said on “Fox News Sunday” that the airport crowds could spread the disease, but that they are likely to continue. American citizens, he said, need to understand that there is no need to rush back from Europe, but “when people see a travel ban, they immediately want to hunker and get home.”

“Hopefully we don’t have more of that, but I think we probably unfortunately will,” he said.

The Texas airport’s Twitter account responded to passengers who raised concerns about the cramped conditions, saying that its customer experience team was taking “extra precautions” and that hand sanitizer was available in all terminals. Meanwhile, O’Hare and Chicago police offered queuers bottled water and snacks, according to the airport’s Twitter account.

For most people, the new coronavirus causes only mild or moderate symptoms, such as fever and cough. For some, especially older adults and people with existing health problems, it can cause more severe illness, including pneumonia.

The vast majority of people recover. People with mild illness recover in about two weeks, while those with more severe illness may take three to six weeks to recover, according to the World Health Organization.

Travelers from restricted countries in Europe, China and Iran are being advised to self-quarantine for 14 days after reaching their final destination in the U.S.

“If you don’t have to travel, I wouldn’t do it,” Trump said.

The worldwide outbreak has sickened more than 156,000 people and left more than 5,800 dead, with thousands of new cases confirmed each day. The death toll in the United States climbed to 57, while infections neared 3,000.