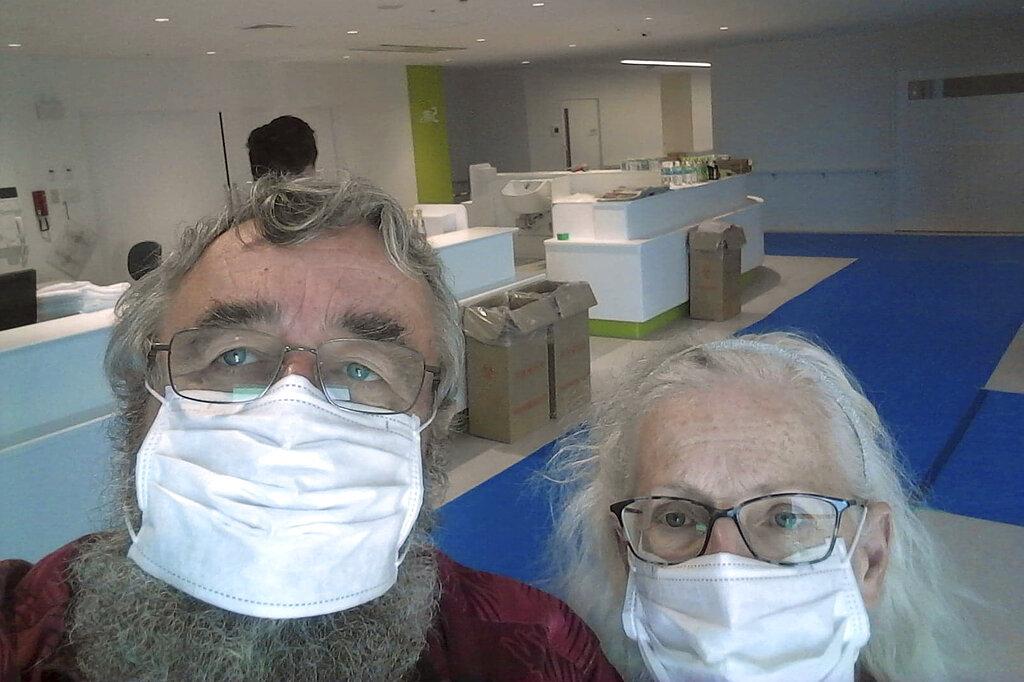 This Feb. 24, 2020 photo provided by Greg and Rose Yerex shows them in a hospital in Nagoya, Japan. Former passengers of the cruise ship Diamond Princess, they both tested positive for the coronavirus. (Greg Yerex via AP)

SEATTLE (AP) — Amid all the fears, quarantines and stockpiling of food, it has been easy to ignore the fact that more than 60,000 people have recovered from the coronavirus spreading around the globe.

The disease can cause varying degrees of illness and is especially troublesome for older adults and people with existing health problems, who are at risk of severe effects, including pneumonia. But for most of those affected, coronavirus creates only mild or moderate symptoms, such as fever and cough, with the vast majority recovering from the virus.

According to the World Health Organization, people with mild illness recover in about two weeks, while those with more severe ailments may take three to six weeks to rebound. In mainland China, where the virus first exploded, more than 80,000 people have been diagnosed, but more than 60,000 already have recovered.

Because the difference in impact can be so great, global health authorities have the difficult task of alerting the public to the virus’ dangers without creating panic.

Already, the widespread consequences of the virus have been staggering, sending shock waves through the world’s financial markets. Global oil prices sustained their worst percentage losses since the the Gulf War in 1991, and new restrictions were imposed in Italy and in Israel as the Holy Week approached.

But even some of the most vulnerable patients can fight their way through the disease.

Eugene Campbell came to the hospital from Life Care Center, a nursing home in Kirkland that has been linked to a large share of the state’s coronavirus deaths.

“We went and saw him yesterday and he looked pretty good,” Campbell said, noting that his father is breathing normally and his vital signs and heart rate are good. “He may be the oldest person to recover from coronavirus.”

In China, Tan Shiyun, a postgraduate student at a university in Wuhan, had traveled to her family home in Yichang over 180 miles away when she began to experience minor symptoms from the virus.

She went to the hospital, where she was given common cold medicine and sent home. It was only after her symptoms persisted and she visited the hospital a second time for an outpatient CT scan and received a call asking her to come back did she understand her symptoms came from something other than the common flu.

After many days and a number of tests, doctors eventually told her that the infection had spread to both of her lungs.

“After that, I felt a heavy head while walking, unable to breathe, and nauseous,” Tan said in a video blog post. But after over two weeks in the hospital, a CT scan showed her infection was disappearing and she was discharged.

For some who’ve been quarantined, anxiety and dread that they will become stigmatized by friends, neighbors and co-workers have made them reluctant to acknowledge even the most modest health impact. A few patients with the virus who were interviewed by The Associated Press — all of them passengers on the Diamond Princess cruise ship that ended up quarantined off Japan — described symptoms that were no stronger than a regular cold or flu.

“It’s been a 2 on a scale of 10,” said Carl Goldman, hospitalized in Omaha, Nebraska, since Feb. 17, after developing a 103-degree fever on a chartered flight from Japan to the U.S.

Goldman is staying hydrated with Gatorade. He said he continued coughing more than two weeks after he first got sick, but would probably only have missed one day of work if he had been diagnosed with the cold or flu. He stays active by pacing in his room, trying to match his pre-sickness routine of 10,000 daily steps on the pedometer.

American Greg Yerex, who was diagnosed along with his wife, Rose Yerex, on the Diamond Princess, said he had no symptoms and felt as healthy as he did on any other normal day.

“If I was home, I would be out doing everything I normally do,” he said in an interview conducted via Facebook calls when the couple were still hospitalized in Nagoya, Japan. Rose Yerex tested negative when she got to the hospital.

For Greg Yerex, it was the couple’s mental health that faced the biggest threat as they they spent days in quarantine, isolated from friends and family and deprived of any direct human contact.

“It’s like being a prisoner,” he said. “You pace, you worry, you fret, you imagine all sorts of things. You have no control.”

Greg Yerex said that he and his wife, who have since been released from the hospital, plan to go to counseling to work through the mental stress they experienced.

“I don’t get to speak with anyone,” she said in a Facebook call while still hospitalized in Nagoya. “I have a little window in my room, but cannot leave. The only contact I have is through Facebook messenger. I would never wish this on anyone.”

Frasure said one of the things she found most frustrating was waiting for her test results to come back. Patients who have been diagnosed with the virus must have two consecutive negative tests before they can be released.

Frasure is now out of the hospital, but is worried about being stigmatized by her home community.