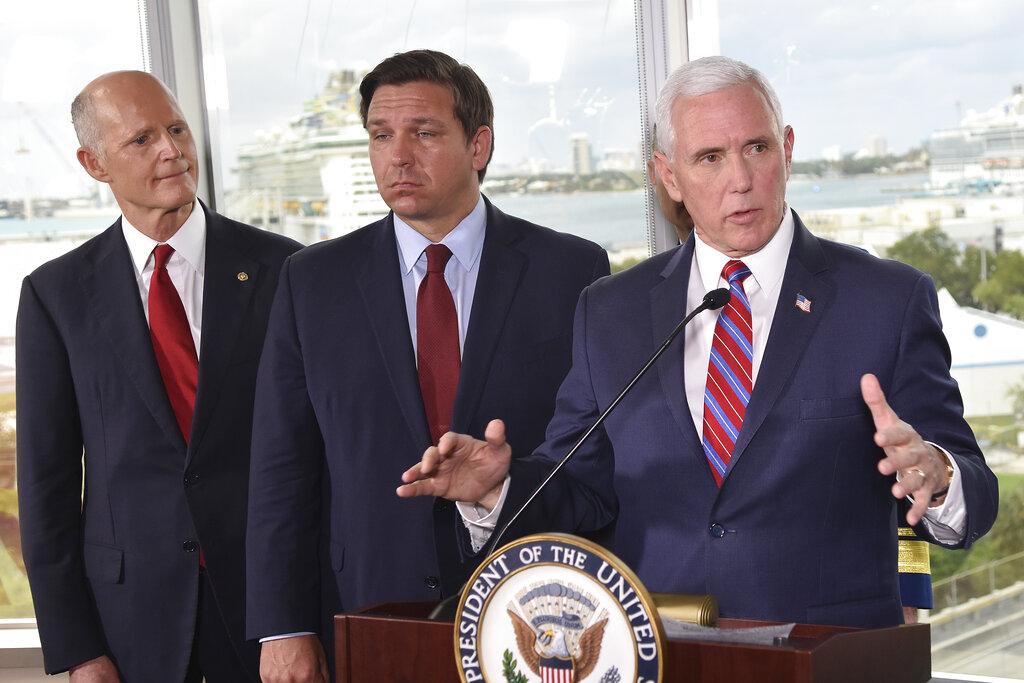 NEW YORK (AP) — The White House overruled health officials who wanted to recommend that elderly and physically fragile Americans be advised not to fly on commercial airlines because of the new coronavirus, a federal official told The Associated Press.

The Centers for Disease Control and Prevention submitted the plan this week as a way of trying to control the virus, but White House officials ordered the air travel recommendation be removed, said the official who had direct knowledge of the plan. Trump administration officials have since suggested certain people should consider not traveling, but they have stopped short of the stronger guidance sought by the CDC.

The person who spoke to the AP on condition of anonymity did not have authorization to talk about the matter. The person did not have direct knowledge about why the decision to kill the language was made.

In a tweet, the press secretary for Vice President Mike Pence, Katie Miller, said that “it was never a recommendation to the Task Force” and called the AP story “complete fiction.”

On Friday, the CDC quietly updated its website to tell older adults and people with severe medical conditions such as heart, lung or kidney disease to “stay home as much as possible” and avoid crowds. It urges those people to “take actions to reduce your risk of exposure,” but it doesn’t specifically address flying.

“If you’re a senior citizen with a serious underlying health condition, this would be a good time to practice common sense and to avoid activities including traveling on a cruise line,” Pence said, adding they were looking to cruise line officials for action, guidance and flexibility with those passengers.

For most people, the flu-like viral illness causes only mild or moderate symptoms, such as fever and cough. But — like the flu — it can cause pneumonia and be much more lethal to people made frail by old age and by conditions that make it harder for their bodies to fight infections.

Dr. Peter Hotez, dean of tropical medicine at Baylor College of Medicine, this week warned U.S. lawmakers against minimizing the viruses risk for vulnerable people. During a Congressional hearing, he said the coronavirus “is like the angel of death for older individuals.”

Some experts this week said clearer and louder guidance should be made to vulnerable people, so they take every possible step to avoid settings where they might more easily become infected.

“The clear message to people who fit into those categories is: ‘You ought to become a semi-hermit. You’ve got to really get serious in your personal life about social distancing, and in particular avoiding crowds of any kind,’” said Dr. William Schaffner, a Vanderbilt University expert on infectious diseases.

That can include not only avoiding essential commercial travel but also large church services and crowded restaurants, he added.

Dr. Tom Frieden, a former CDC director, said whether to recommend the frail and elderly avoid air travel is “a difficult question,” but clearly this is a time when such conversations should be taking place.

“At this point the risk in the U.S. remains low, but we are seeing it spread rapidly. We are going from the calm before the storm to the beginning of the storm,” said Frieden, who now heads Resolve to Save Lives, an organization promoting global public health.

The new virus is a member of the coronavirus family that can cause colds or more serious illnesses such as SARS and MERS. Health officials think it spreads mainly from droplets when an infected person coughs or sneezes, similar to how the flu spreads.

The virus first emerged late last year in mainland China, but this year has increasingly been spreading around the world. More than 100,000 illnesses have been reported globally, in more than 90 countries and territories. the count includes more than 3,500 deaths.

For weeks, cases in the U.S. remained very low, but the count has been accelerating in the last several days.

President Donald Trump visited the CDC in Atlanta on Friday, where he defended his administration’s handling of the outbreak and tried to reassure Americans that the government had the virus under control. But Trump also detoured from that message, calling Washington state’s governor a “snake” and saying he’d prefer that people exposed to the virus on a cruise ship be left aboard so they wouldn’t be added to the nation’s tally.