Illinois’ primary election isn’t until March, but perhaps the most consequential state race of the year has already taken place, as state senators on Sunday elected a new president: Sen. Don Harmon of Oak Park.

It’s a powerful position changing hands at a crucial time in state government, with the 2020 elections, which will include a constitutional amendment ballot question to allow for income to be taxed at graduated rates, as well as an ongoing federal corruption probe.

Harmon, a practicing attorney at the Chicago firm Burke Burns & Pinelli who has been a legislator since 2003, said he will work to “restore the public’s trust in Illinois government while at the same time, the similarly urgent need for us to rationalize our tax policy by adopting the ‘Illinois Fair Income Tax’ on the ballot in November and finding a way to push down the pressure on property taxes.”

Outgoing Sen. John Cullerton surprised legislators in November when he announced his plans to retire midterm, setting in motion months of maneuvering between senators seeking to replace him.

Early on, Harmon and another veteran lawmaker, Sen. Kim Lightford, D-Maywood, came away as top contenders.

Harmon was an early backer of a graduated income tax constitutional amendment, now a key initiative of Gov. J.B. Pritkzer.

Neither went into the weekend with the necessary 30 votes, however, leading to roughly six hours of closed-door meetings at the statehouse on Sunday. Senate Democrats present for portions of it say that Harmon won an initial, secret ballot vote, which gave way to fresh negotiations, including one-on-one deliberations between Harmon and Lightford.

Only after Democrats had privately coalesced around Harmon did the Senate convene to make it official.

After 11 years as president, Cullerton stood for a last time on the dais and said it’s with “mixed emotions” he was giving up the gavel, but “my grandchildren await.”

With his resignation in effect, Pritzker – celebrating his 55th birthday – took to the podium to preside over the election.

“I am confident that Don will ably serve and lead the Senate with a steady hand and integrity above all else. A staunch advocate for working families, Don was instrumental in shepherding the most sweeping and consequential legislative agenda through the state senate this past year,” Pritzker later said in a statement.

“Don and I have neighboring district and we have since 2002 so we’ve been neighbors in the western suburbs and on the west side of Chicago,” Lightford said. “I can’t think of anyone else who would do a wonderful job leading our caucus and I look forward to working with him in unity.”

Lightford, a key player on education issues and the lead sponsor of the law that will raise Illinois’ minimum wage to $15 come 2025, would have been the first female and the first black woman to serve as Illinois Senate president.

As part of a deal with Harmon, she will continue her role as majority leader.

Their terms will be brief, though. A new Illinois Senate will be seated in early 2021, and senators will at that time again have the opportunity to vote for president. Still, turnover of the legislative leadership roles is rare (Harmon’s House counterpart, Speaker Michael Madigan, has held the position since 1983 save for a two-year break when Republicans won control of the chamber) and Democrats are expected to easily maintain their supermajorities.

During his first speech as Senate president, Harmon promised to “govern in the spirit of cooperation and collegiality.”

“Choosing a new leader, especially among your peers, is a leap of faith. I stand before you, humbled by your confidence,” he said. “At times the contest was vigorous and sometimes contentious, so as Martin Luther King said, ‘Unity is the great need of the hour.’ I want to assure my colleagues on both sides of the aisle that my door will always be open and I want to express my gratitude to Sen. Lightford for her commitment to partnering with me to heal whatever rough edges may have emerged during the contest.”

Those rough edges could be sharp, and cutting, and exposed a potential rift among black legislators.

“We’re going to make history today or we’re not so the tensions are high,” said Sen. Emil Jones III, D-Chicago, as he stopped to talk with reporters Sunday afternoon while negotiations were underway. “I don’t want to say hard feelings, but strong emotions. The stakes are high.”

Like Lightford, Jones – the son and namesake of 2003-2009 Illinois Senate President Emil Jones Jr. – is black, but Jones backed Harmon.

“I said in the beginning that it’s time for a woman to lead this chamber, but if you don’t have the support to pull it over the finish line … Me putting my district first, I chose to be with the winner,” he said. “If we can’t come together as a caucus then we don’t deserve to be here, so yes we will heal.”

“We’re Democrats, we fight with each other, but we always seem to come together and rally around the important issues for working families of Illinois. I have no doubt that there will be work involved but that we will be able to do that successfully,” he said.

Harmon is scheduled to appear Wednesday on “Chicago Tonight.”

Note: This story was first published Sunday, Jan. 19. It has been updated. 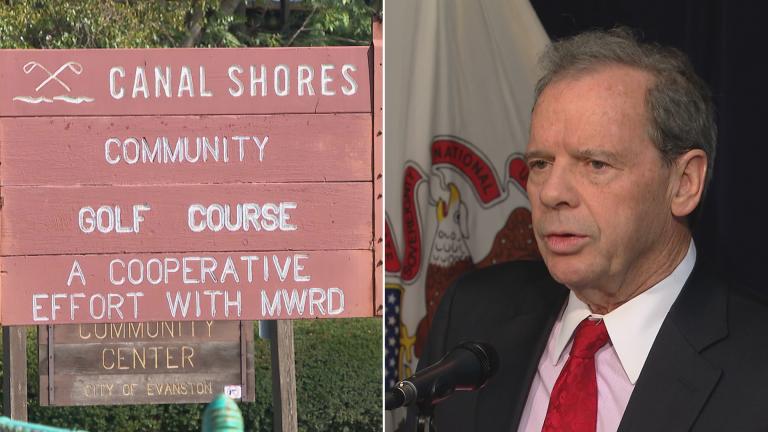