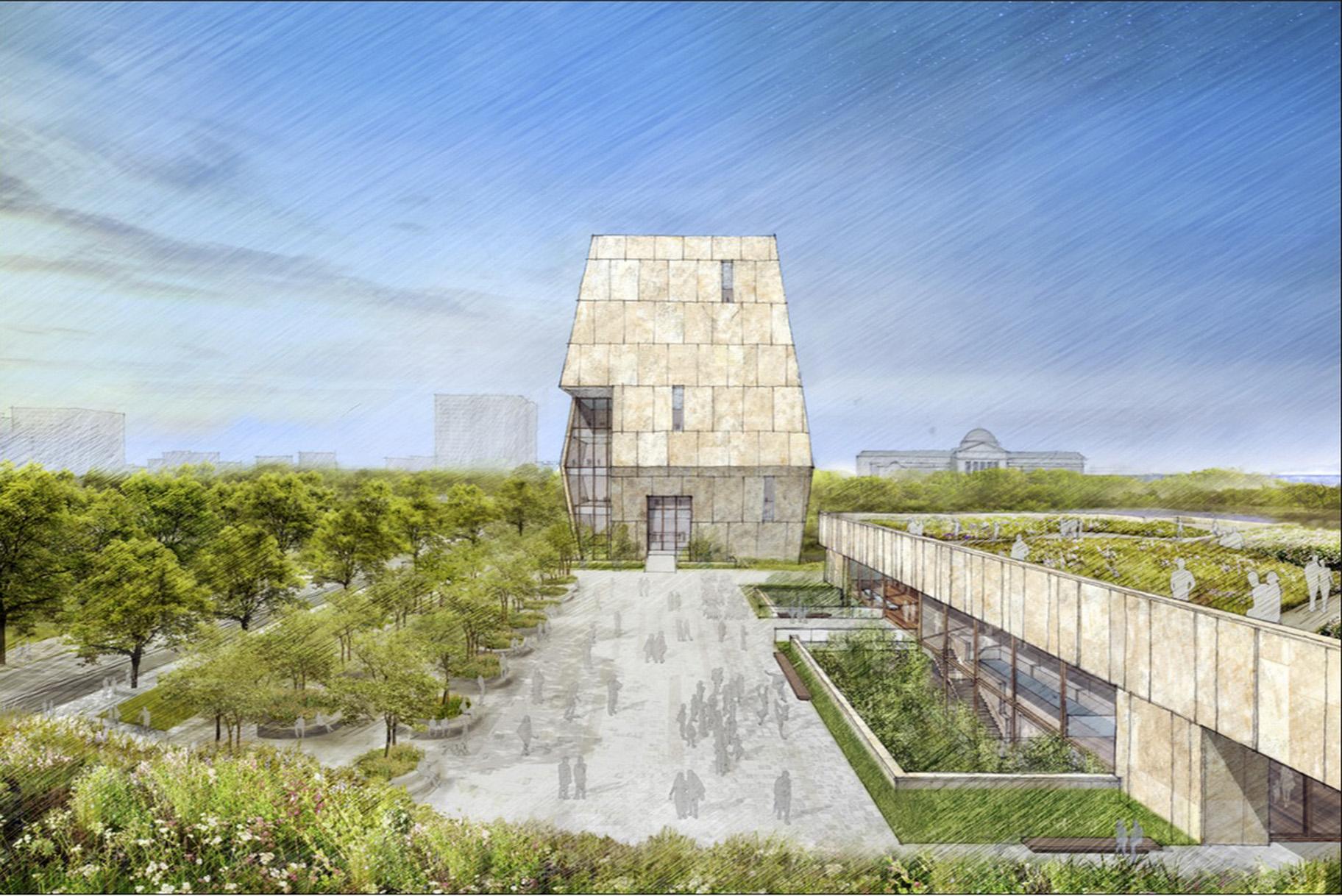 This illustration released on May 3, 2017 by the Obama Foundation shows plans for the proposed Obama Presidential Center with a museum, rear, in Jackson Park on Chicago's South Side. (Obama Foundation via AP, File)

CHICAGO (AP) — Odds may still favor the eventual construction of former President Barack Obama’s $500 million museum and library in a public park along Chicago’s lakeshore, but it’s no longer a sure thing in the face of a formidable legal challenge by a parks advocacy group.

U.S. District Judge John Robert Blakey heard oral arguments Thursday on a key motion by city attorneys to toss a lawsuit by Protect Our Parks that aims to halt the Obama Presidential Center from ever being built in the selected location. Blakey said he’ll issue a ruling Tuesday.

Recent Chicago history indicates lawsuits like the one filed by Protect Our Parks can stymie and even kill blockbuster projects, even ones proposed by VIPs with enormous financial and political influence.

A lawsuit brought by Friends of the Park helped scuttle a $400 million plan by “Star Wars” creator George Lucas to build a museum on public land next to Chicago’s lakefront. That suit, like the Obama-project complaint, argued the project ran afoul of laws dating back to the 1800s barring new developments in a 26-mile (42-kilometer) chain of parks hugging Lake Michigan.

As the litigation wound through federal court in 2016, Lucas ditched the Chicago plans. The museum is now under construction in Los Angeles.

Many of the oral arguments Thursday focused on questions about whether Protect Our Parks has standing to sue. A ruling in favor of the group could signal that the Obama Presidential Center is in real trouble.

A look at the project and some of the key legal issues:

Q: WHAT ARE THE PLANS?

A: If backers of the center prevail, it would be built 7 miles (11 kilometers) south of downtown Chicago in Jackson Park, named after President Andrew Jackson. The park, landscaped in the 1800s and a site for the Chicago World’s Fair in 1893, is listed on the National Register of Historic Places. It’s near low-income neighborhoods where Obama once worked as a community organizer. It’s also just blocks from the University of Chicago, where Obama was a law professor and near where the Obamas lived until he won the presidency in 2008.

The center would comprise 20 acres (8 hectares) of the 500-acre (202-hectare) park. Its centerpiece building would be a 225-foot (69-meter) museum tower, with a cluster of lower buildings around it, including a 300-seat auditorium. The center’s website says the complex will be “a world-class museum and public gathering space that celebrates our nation’s first African American President and First Lady (Michelle Obama).”

It was originally slated to open in 2021, though ground hasn’t yet broken because of the lingering litigation.

Q: WHAT’S THE AGREEMENT WITH CHICAGO?

A: The Obama Foundation, a private nonprofit, would pay $10 to the city for use of the park land for 99 years. The foundation would pay the costs of constructing the complex and be responsible for covering operating costs over the length of the 99-year deal. Once built, however, the Obama Presidential Center’s physical structures would be transferred to the city for free. So the city would formally own the center but not control what happens there.

Among the steps taken to make the park available for the project, the Chicago Park District first sold the land to the city for $1. Illinois legislators — at the city’s urging — also amended the state’s Illinois Aquarium and Museum Act to include presidential libraries as an exception to the no-development rules if there’s a compelling public interest. The Chicago City Council approved the project by a 47-to-1 vote last May.

City lawyers conceded Thursday that the cost to the city of reconfiguring roadways to manage traffic around the center would be an estimated $175 million.

A: In its 2018 suit, which names the city and park district as defendants, Protect Our Parks accused the city of illegally transferring park land to a private entity, The Obama Foundation. They say city officials manipulated the approval process and tinkered with legislation to skirt long-standing laws designed to ensure residents had unobstructed access to lakeside parks.

“Defendants have chosen to deal with it in a classic Chicago political way ... to deceive and seemingly legitimize an illegal land grab,” the lawsuit says. It also described the city as “gifting” prized land to a Chicago favorite son.

“They are essentially giving (property) to Obama ... for 10 cents a year for 99 years,” parks advocacy lawyer Mark Roth said Thursday.

Obama remains hugely popular in the heavily Democratic city and most Chicagoans back the project.

But in a friend-of-the-court brief, legal scholar Richard Epstein said public-trust doctrine places extra burden on authorities to prove overwhelming public benefit when they offer the use of public parks to such popular, well-connected figures as Obama.

“Obama is one of the most powerful and influential personages in Chicago life, with deep ties to Mayor Rahm Emanuel (Obama’s former White House chief of staff),” Epstein wrote. “His enormous clout cries out, not for deference, but for searching scrutiny.”

Among other assertions in the lawsuit is that the center would interfere with migrating butterflies and birds.

A: City lawyers say Protect Our Parks misread the law, has misrepresented how the approval process played out and exaggerated potential environmental disruptions. They say planners have done all they can to blend center facilities into the surrounding nature, including by planting more than 400 trees.

City lawyers say the center will provide significant benefits, including bringing a major economic boost to poor local minority communities. Backers estimate it will create 5,000 jobs during construction and over 2,500 permanent jobs. An estimated 760,000 people could visit each year.

A friend-of-the-court brief submitted by 11 existing Chicago museums said the center in Jackson Park would “be a cultural and economic treasure for Chicago.”

Obama picked Chicago over other places, including Hawaii where he was born. Erin Adams, a Chicago resident who attended Thursday’s hearing, said she worries that frustration over the lawsuit and the delays it has caused will lead Barack and Michelle Obama to rethink their selection.

“I’m fearful,” she said outside the court, “that at some stage the Obamas will say to themselves: ‘Maybe we should consider Hawaii after all.’”