Ask Geoffrey: Was There a Panda at Lincoln Park Zoo?

Geoffrey Baer solves the mystery of a viewer’s “vague memory” from the 1940s, revisits an exhibit at the Century of Progress and opens the door to the Evanston History Center.

My mother loved to tell the story about her visit to the Century of Progress when she was 18. She said they went through a booth and saw their images on “television,” such as it was at the time. I have never seen any other reference to this sort of exhibit. Can you help?

Bob, your mom was right! An early form of television known as “mechanical” television was demonstrated at the 1933 Century of Progress.

Mechanical television used a perforated spinning disc illuminated from behind to create an image.

History buffs might associate early television demonstrations in the U.S. with the 1939 World’s Fair in New York City, where RCA’s splashy display introduced a fully electronic form of television to Americans, which created an image using cathode ray tubes to focus a stream of electrons. That’s the version of television the world wound up adopting.

The 1933 Century of Progress demonstration took place in a small theater in the fair’s Electrical Building.

Volunteers would appear before a primitive camera and the image would be displayed live on a large screen to the astonished audience. The volunteer would get a card afterwards saying they had personally appeared in a television demonstration – a gimmick the RCA demonstration copied at the 1939 fair.

The technology shown at the Century of Progress was developed by Chicagoan Ulises Sanabria, whose experiments in television go as far back as the mid-1920s. Sanabria demonstrated his invention at stores and conventions across the country culminating in his 1933 World’s Fair display sponsored by the Hudson-Essex Motor Company as a way to promote their own products at the fair.

Sanabria, who taught himself electronics as a teenager, went on to found the American Television Institute in Chicago, a technical school where students were trained in the electronic television that was later adopted by the industry.

He also worked with inventor Lee deForest, a pioneer in ship-to-shore radio broadcasts, to build a flying torpedo controlled by television (an early military drone).

It’s also possible our viewer’s mother saw a very similar contraption elsewhere in the electrical building at the Century of Progress. It was called a two-way telephone-television, which allowed people to see each other while speaking on the phone – the official description of the photo below was, “Patricia Marquam, Fair beauty queen, and Phil Baker, Armour's star jester on the radio, see and hear each other over the very latest in two-way telephone-television at the Television theater in the Electrical building at the new World's Fair in Chicago. This picture shows the manner in which the phone booths are equipped and the image each saw. Patricia has just interrupted one of Phil's jokes with a merry quip of her own which, as can be seen, beings a broad grin to Phil's face.” 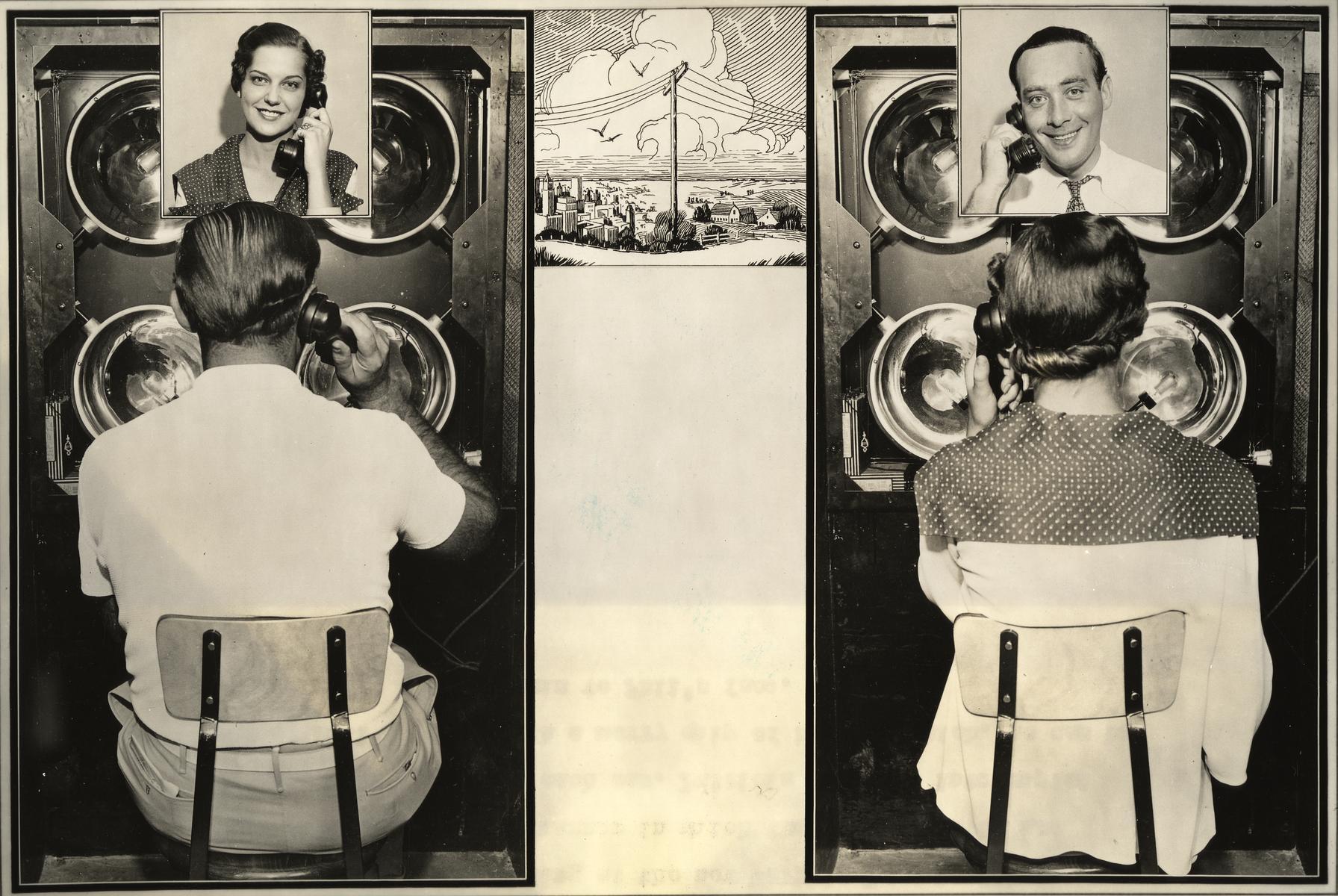 I have a vague memory of seeing a panda at Lincoln Park Zoo when I was a child in the 1940s. Did I actually see a panda or is this a dream I made up?

Right animal. Wrong zoo. There were, at various times, three pandas – but they were at Brookfield Zoo, not Lincoln Park Zoo. 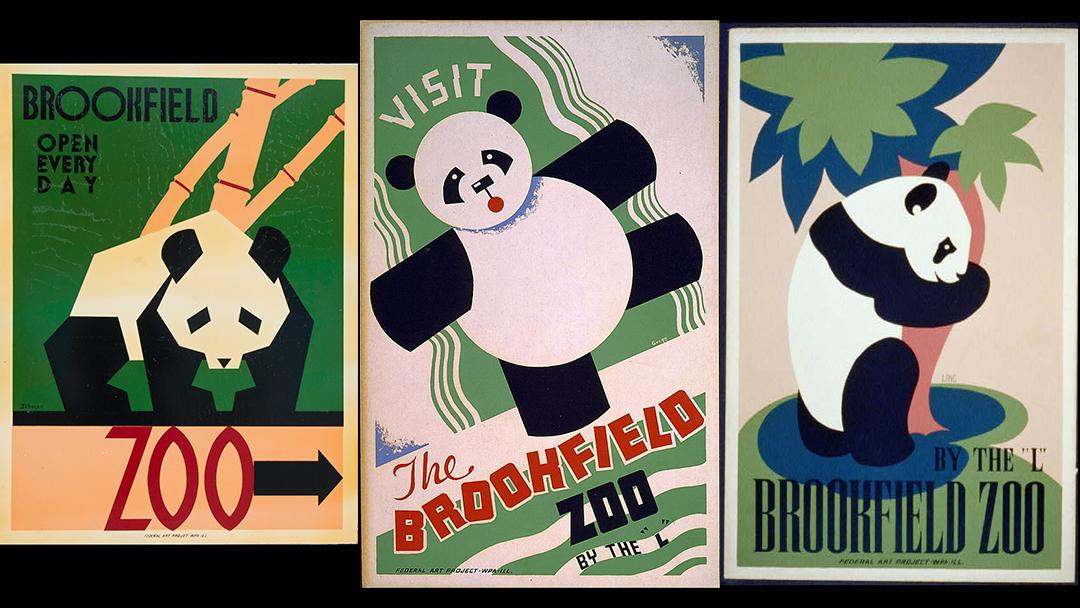 The pandas were a huge attraction for the west suburban zoo starting in 1936, when the first panda, named Su Lin, was captured in China and brought to the United States.

Ruth married explorer Bill Harkness in New York in 1934. Shortly after they married, Bill planned an expedition to become the first person to bring a live panda to the west. But when Bill died suddenly before the expedition even began, Ruth decided to take up the mission herself.

She rounded up a crew including Chinese-American naturalist Quentin Young and traveled to China, where they claimed they found baby Su Lin in a hollow tree. Young put the baby panda in his shirt and they made their way back to New York.

Su Lin lived with Harkness in her New York apartment for several months until the Brookfield Zoo offered to acquire the panda in exchange for expenses for a second expedition.

The next year, Harkness brought back a second panda, Mei Mei, to the zoo, but they did not like each other at all and had to be separated. Not long after Mei Mei moved in, Su Lin died of pneumonia.

A third panda came to Chicago when the publisher of the Chicago Daily News commissioned an expedition for a mate for Mei Mei. That panda, Mei Lan, arrived in 1939.

Mei Mei died a few years later, but Mei Lan remained a Brookfield Zoo favorite until he died at the age of 15 in 1953.

Ruth Harkness’ story is the subject of a movie due out later this year titled, “The Lady and the Panda.”

By the way, you can still visit Su Lin – he is stuffed and part of a diorama at the Field Museum.

The Evanston History Center is in a mansion that was once owned by a US Vice President. Can you tell us about him?

The Evanston History Center was once the home of the highly principled and famously hot-tempered Charles Gates Dawes, who served as the nation’s 30th vice president under Calvin Coolidge from 1925 to 1929.

Dawes purchased the home in 1909. It was originally built in 1894 for Northwestern University Treasurer Rev. Robert Sheppard.

As for Dawes, there’s a lot to tell – he lived a remarkable life. He was born in Ohio and started his career as a lawyer and banker in Nebraska.

Dawes’ debut in politics was as the manager of William McKinley’s presidential campaign in Illinois. McKinley later appointed him comptroller of the currency.

Among Dawes’ most lasting contributions was opening the Rufus Fearing Dawes Hotel, homes for indigent men in Chicago and Boston, in 1914. They were named to honor the memory of his son who accidentally drowned in Lake Geneva, Wisconsin, in 1912. Later, Dawes and his wife opened a similar home for women honoring Mrs. Dawes’ mother, the Mary Dawes Hotel.

Dawes’ longtime friend General John J. Pershing tapped him for a key position in WWI, running supply operations for U.S. troops. His WWI service brought him to national attention when the Republican Congress, eager to dig up dirt on the previous administration, brought him in to testify on what they considered excessive war spending. The irascible Dawes exploded, “Hell and Maria, we weren't trying to keep a set of books over there, we were trying to win a war!”

Dawes was awarded the Nobel Peace Prize in 1925 for his work helping Germany rebuild its economy post-World War I, which became known as the Dawes Plan.

Dawes was selected as Calvin Coolidge’s running mate on the Republican ticket in 1924 and the pair won easily, but Dawes and Coolidge butted heads from day one. Dawes’ first act as vice president was to give a fiery speech to the Senate lambasting the use of filibusters, embarrassing Coolidge. And, Dawes didn’t think he needed to attend cabinet meetings – he saw them as a waste of his time. So he didn’t.

In the end, Coolidge never even mentioned Dawes by name in his memoirs.

Both Coolidge and Dawes declined to run for re-election, and Dawes spent the rest of his life as a banker in Chicago until his death at age 85 in 1951.

Given his stern persona, it might come as a surprise that Dawes is the only vice president and the only Nobel Peace Prize winner to have co-written a Billboard #1 hit – but he never knew it.

Dawes was an accomplished pianist and composer, and wrote one of his best-known compositions in 1911, called “Melody in A Major.” The tune was often played at state events Dawes was attending. Seven years after his death, Dawes’ “Melody” topped the charts when lyrics were added, creating the song “It’s All in the Game“ as sung by Tommy Edwards.

Note: This episode of Ask Geoffrey originally aired on January 25, 2017.