Ask Geoffrey: Why Are Chicago Street Signs Green and White? 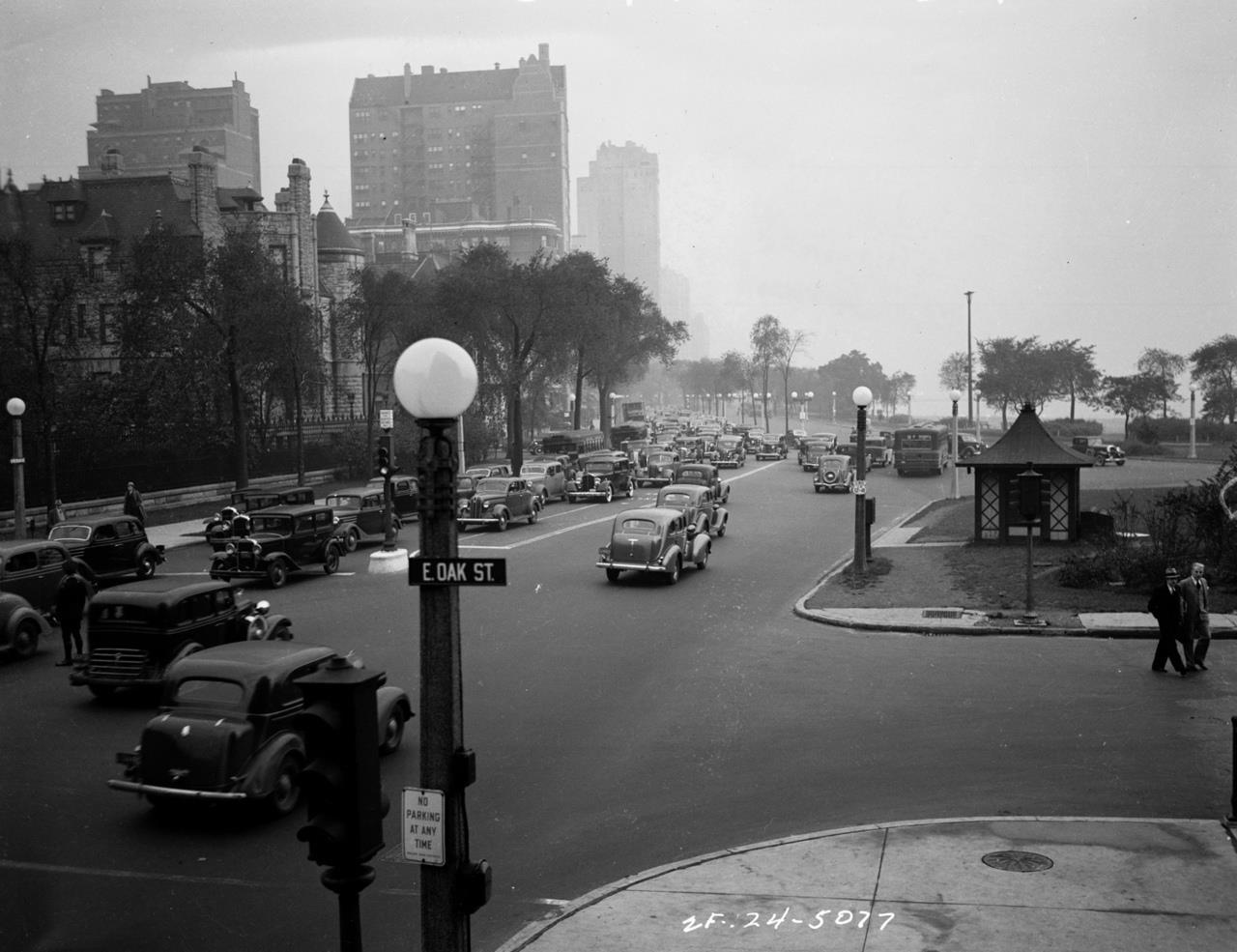 Chicago street signs have it pretty tough. They get battered by the elements, vandalized, stolen, even forged – and worst of all, they get no gratitude for tirelessly helping people find their way around our city. Let’s tip our hats to Chicago’s poor unheralded street signs with two questions about these everyday heroes.

Whose idea was it for street signs to be white on green which does not have great visibility in the daytime and is really difficult to read at night? What was wrong with good old-fashioned black on white? 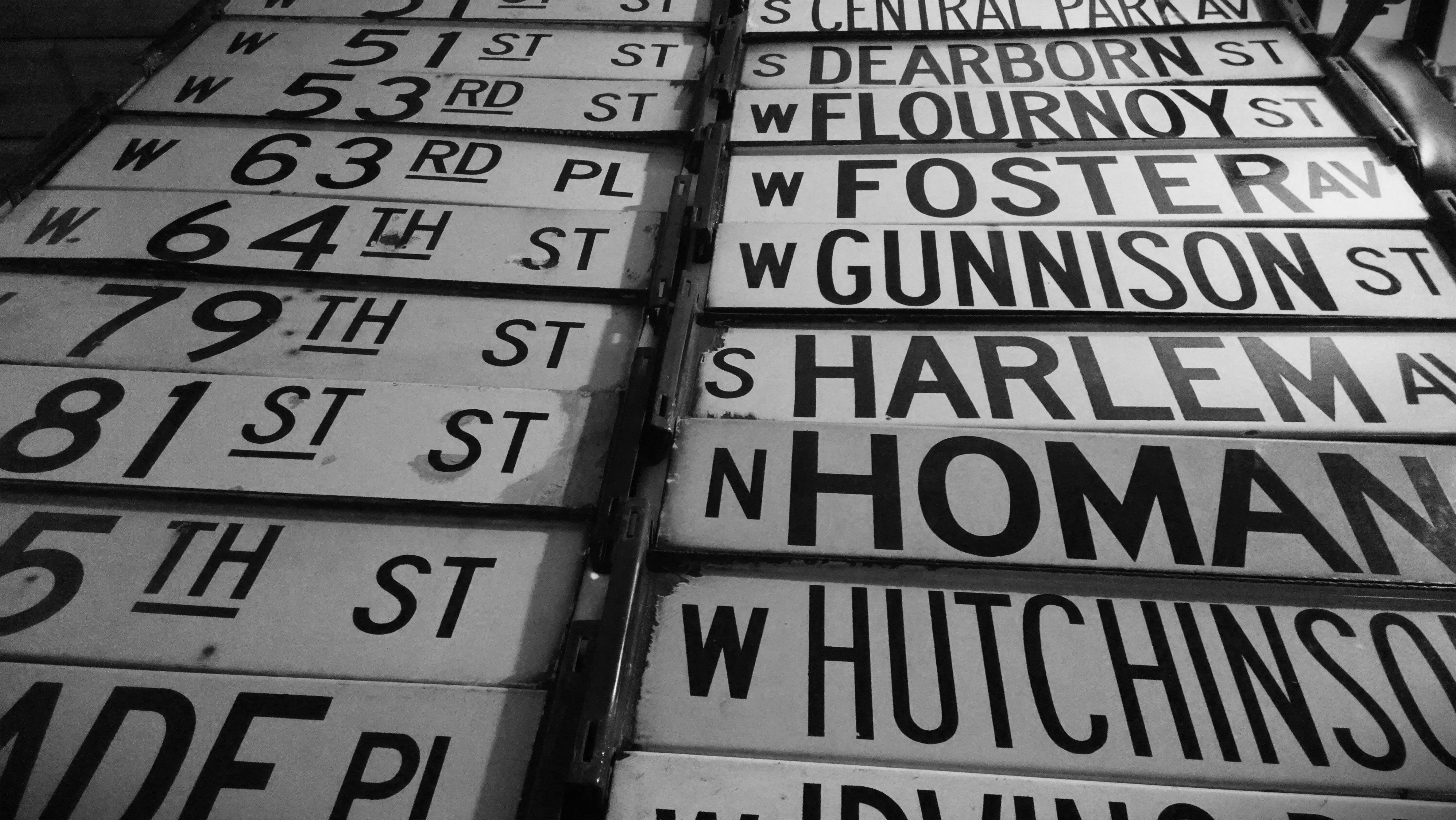 In the 1970s, the MUTCD began a national effort to help foreign visitors navigate the United States by adopting a color-coded sign system similar to Europe’s. Chicago adopted the white-on-green street signs our viewer laments as part of that effort in 1975. 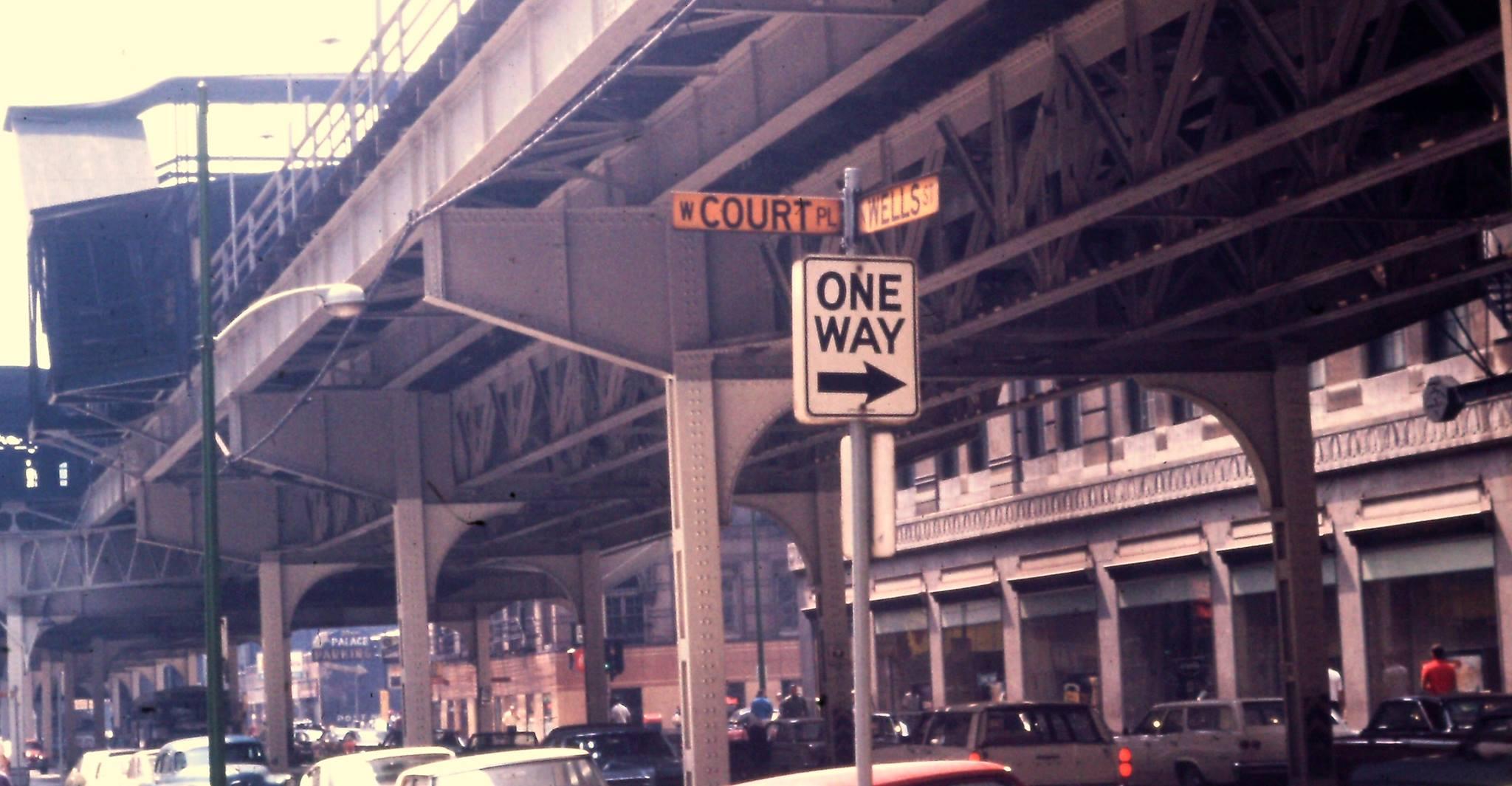 Many of our viewers will remember the yellow street signs with black lettering that used to dot Chicago’s streets. The MUTCD’s revised guidelines restricted the use of yellow in signage to warning signs. It also mandated white backgrounds with black and red lettering or symbols for use as regulatory signs (for instance, “No U-Turn” signs were replaced with a black U with a red slash on a white background).

The guidelines recommended phasing out words on signs where possible and relying instead more on universally understood symbols, like a red circle broken by a white line to indicate “Do Not Enter.” Under that scheme, the color symbols for guidance were green and white – so “reflectorized” white-on-green street name signs became the new standard.

But it wasn’t always signs, signs, everywhere a sign in Chicago. There was no official system in place during the city’s early years, making wayfinding pretty tough in the booming metropolis. A public call for street identification signs began around the turn of the century, when street names were often simply painted onto poles at neighborhood corners (if they were indicated at all).

Later, black-and-white or brown-and-white signs appeared around the city, particularly in the Loop. Finally in 1936, President Franklin Roosevelt approved a grant for Chicago to hang 64,000 black-on-yellow steel street signs as a Public Works Administration project – but those signs didn’t stick around very long. Most were removed for metal drives during World War II.

Not long after the war ended, the city began to examine new sign designs, testing out various lettering styles in the Loop (some of which a typography expert from the Newbery Library decried as “atrocities”). Once a style was settled upon, Chicago ordered new porcelain-coated steel street signs, again in the black-on-yellow color scheme, beginning in 1950.

Over the next few years the signs were installed, beginning at the city’s edges and working their way into the Loop. This time, rather than attaching the signs to the poles with straps that would rust and break, the signs were secured with bolts going into the poles. 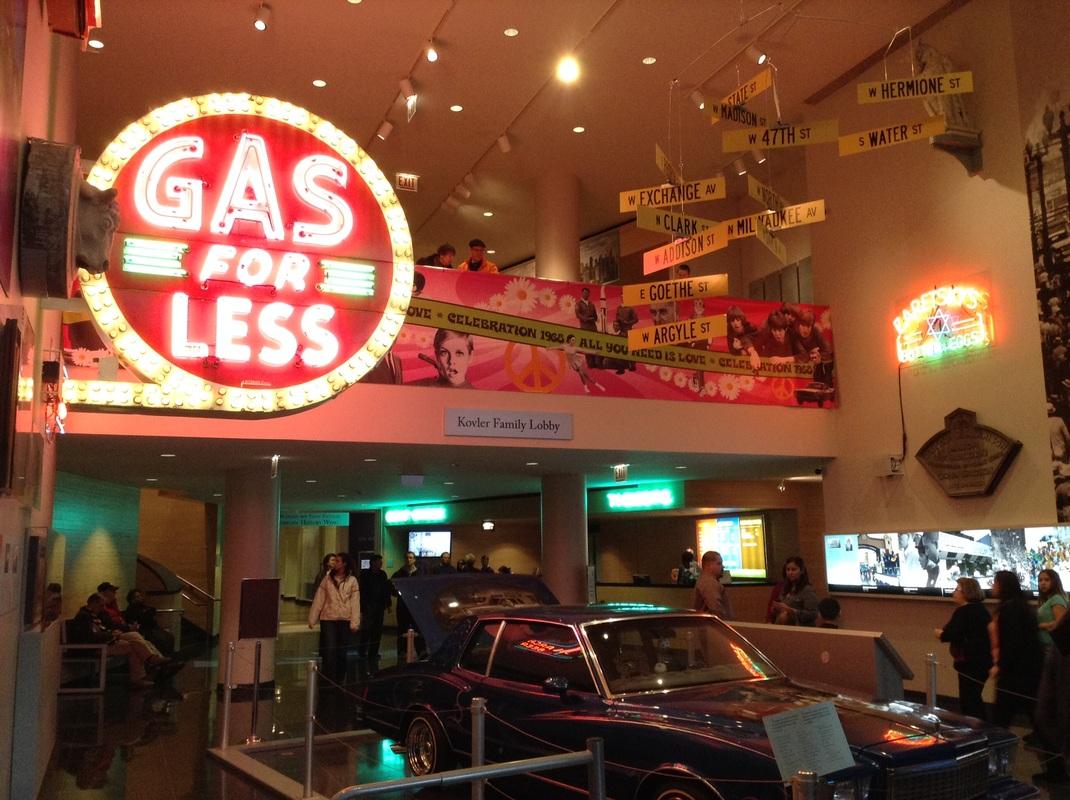 When Chicago moved to the white-on-green signs in 1975, CDOT again went through the gradual process of installing thousands of signs throughout the city’s more than 800 streets. But this time, the city had the brilliant idea of selling the beloved yellow signs to residents, which is why from time to time you’ll see a yellow sign decorating a home or business (or even in a mobile hanging from the ceiling, as in the lobby of the Chicago History Museum).

Guess you just don’t appreciate what you’ve got until it’s gone.

Almost all street signs in Chicago use all-uppercase letters. I've noticed, however, that recently installed street signs use lowercase letters. Is this the new standard? If so, what's behind the change? The all-uppercase signs seem easier to read and better looking to me, while the slow introduction of different signs sacrifices uniformity. Thanks for getting to the bottom of this important issue! 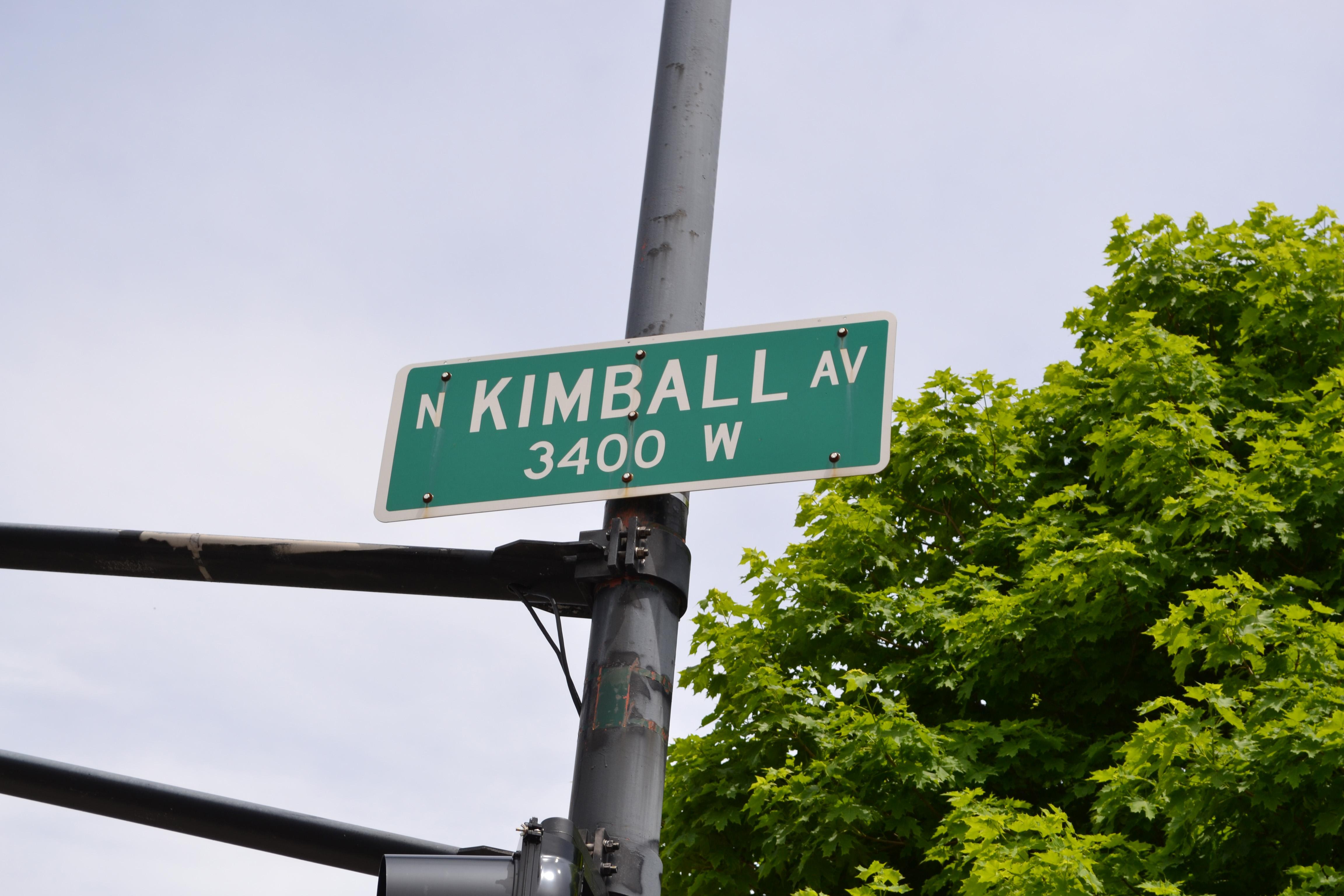 Actually, Jake, this issue was important enough for the Feds to get involved, so you’re onto something here. But as for your opinion that all-uppercase signs are easier to read, well, the answer points in the opposite direction.

CDOT again referred us to the MUTCD for this question. In 2009, the Federal Highway Administration announced in its MUTCD that all cities should use the upper and lowercase format for their street signs because upper/lowercase words are actually easier to read than all uppercase. Don’t believe it? Compare it for yourself! 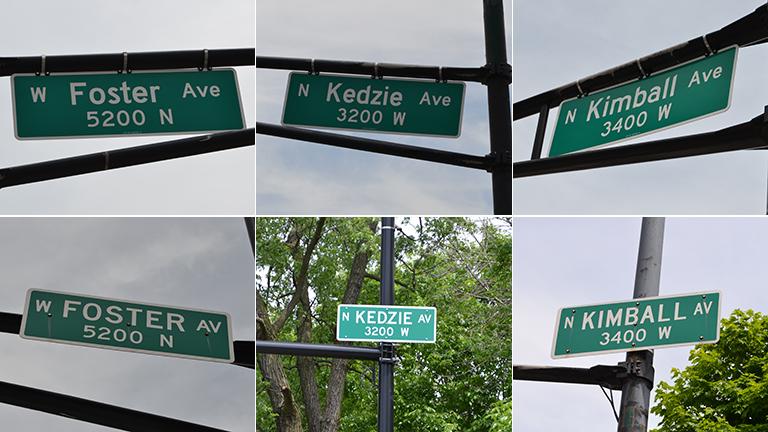 According to research performed by the Pennsylvania Transportation Institute, people read all-uppercase words one letter at a time, but recognize upper/lowercase formatted words as a whole, making reading “MICHIGAN AVENUE” slower and more difficult than reading “Michigan Avenue” while driving past. The upper/lower format also leaves more open space around each letter, which makes the letters easier to distinguish for aging eyes.

The Chicago Department of Transportation is replacing Chicago’s estimated 100,000 street signs “as necessary” so while it does mix things up a little in the interim, from a budgetary perspective, it’s a sign of the times.