Some humans may be inclined to ditch the Windy City once temperatures plummet, but for certain northerly birds, the Chicago area is a welcome winter retreat.

In particular, four species within the finch family can be found visiting the Chicago Botanic Garden during the winter months. The pine siskin, common redpoll, hoary redpoll and white-winged crossbill are considered irruptive species, meaning they fly south during winter due to dwindling food supplies up north. 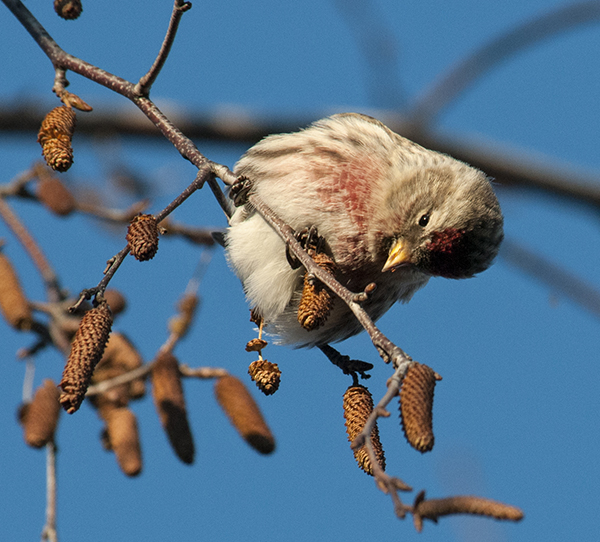 These birds normally live in the northern boreal forests of Canada, where they feed on seeds from coniferous trees like cedars or spruce. The crisscrossed beak of the aptly-named crossbill and tiny, sharply-pointed bill of the siskins and redpolls are designed for easy access to the small seeds inside the cones these trees produce.

The absence of insects to eat in the colder months forces these finches to rely on seed. But depending on winter conditions, seed production can dramatically slow down and snowfall can cover what nourishment is still available on trees. For this reason, the birds migrate south to find food supplies in warmer climates.

The Chicago Botanic Garden’s 385 acres incorporate a wide diversity of habitats, including wetlands, oak woodland, prairies and lake systems. According to Jim Steffen, an ecologist who’s worked at the garden for nearly three decades, that’s the main attraction for the winter’s winged visitors.

“All of these habitats are found in a relatively small area,” said Steffen. “Because we live in this highly urbanized area, there aren’t a lot of places like this for birds to find food or seek cover.”

Luckily enough, the average Chicagoan won’t need acres of ecosystem to encounter these uncommon birds – setting up a cylindrical thistle feeder should do the trick.

Once a visiting pine siskin or redpoll determines that a feeder contains food, Steffen believes the bird “develops a search image” for these tubular feeders in order to spot them from farther away.

They’ll typically stay in an area until the food source is used up, so if the feeder stays filled, chances are the birds will be back for more! 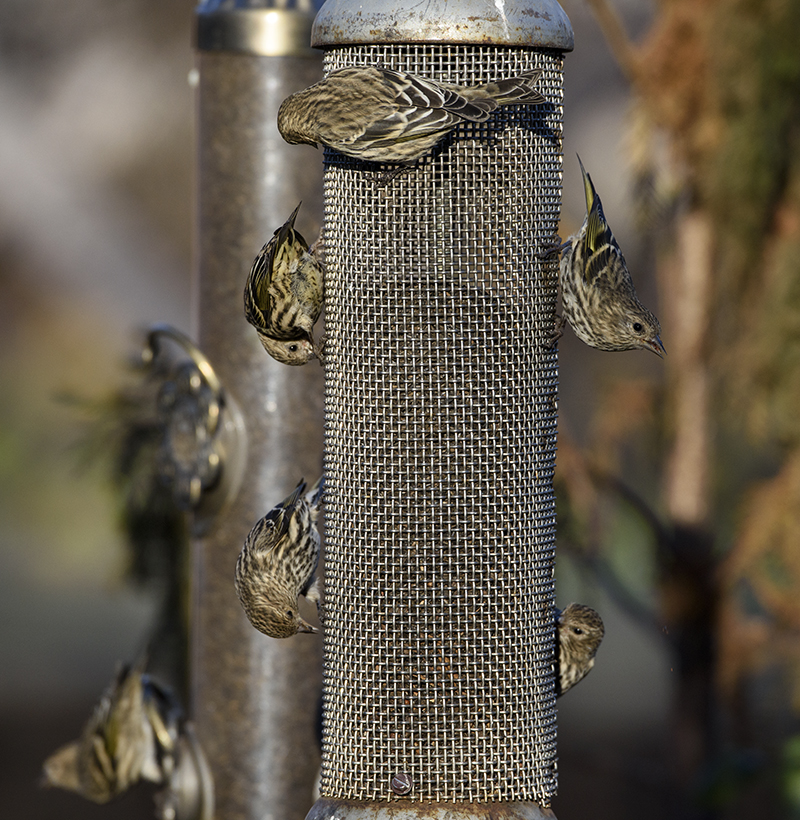 One key to spotting any of these winter finches, of which the hoary redpoll is the least common, is to note their large groups. These small birds tend to travel long distances in large flocks, which is unusual, according to Steffen. The large, cohesive grouping allows birds of the same species to take advantage of the same food source while foraging. They'll also flock together to conserve and generate body warmth, although the pine siskin has the unique ability to monitor its body temperature by accelerating its heart rate. A flock is referred to as a charm of finches.

Frigid temperatures up north can not only stall seed production but also freeze up precious water sources. This makes any open water in the garden and throughout the Chicago region attractive to birds, resident and foreign alike.

Another infrequent wintry visitor this season has been none other than our nation’s natural symbol: the bald eagle. Half a century ago, these majestic birds of prey were on the brink of extinction due to the pesticide DDT’s deleterious effect on their reproductive systems. After a ban on DDT and numerous conservation efforts, their numbers are coming back strong – the species was removed from the List of Endangered and Threatened Species in 2007. To put their incredible recovery into perspective: in 1963, there were only 417 breeding pairs of bald eagles in the lower 48 states; by 2007, there were approximately 11,040 pairs.

The bald eagle that visited the garden last month for a few days was a transient bird temporarily making use of a location’s habitat – no differently than the winter finches. Except unlike those birds, which typically don’t travel further south than Chicago before heading back north, the bald eagle will continue south or towards the coast in search of open water. The garden’s lake system contains fish like bluegills and black bass that attract them. 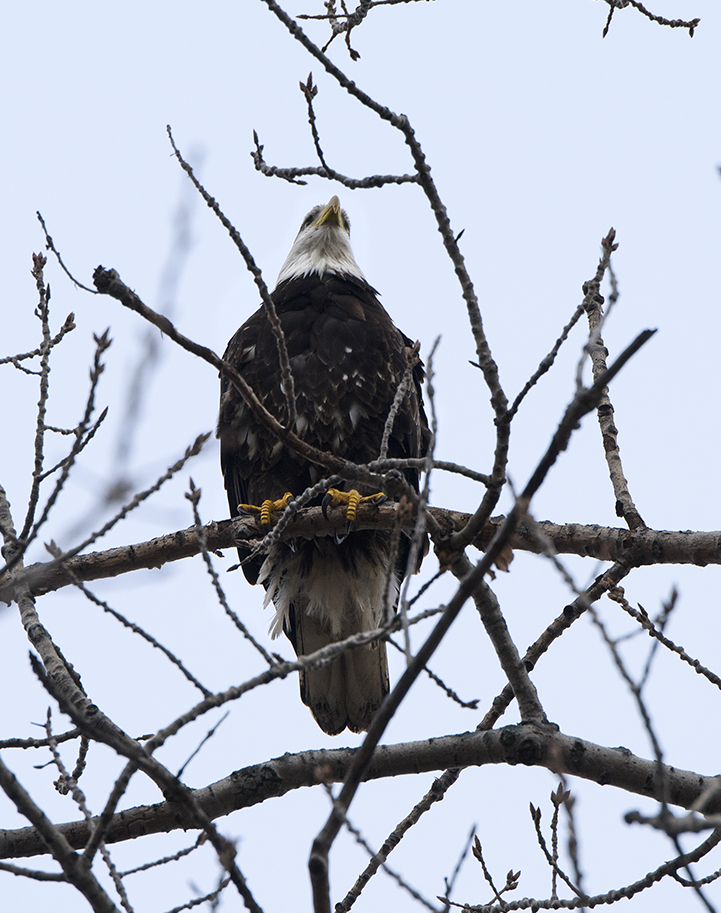 There’s a logbook at the garden’s visitor’s center for birders to list any species they spot. The American Birding Association’s website has a Birding News section where birders can list their daily sightings from around the world.

By Steffen’s count, this season has been unusual and unpredictable. The mild winter, partially due to El Niño’s warming of ocean waters, has contributed to a noticeable decrease in winter finches migrating from the north.

So far, Steffen says there have been upwards of 100 redpolls seen at one time. Most, if not all of these, are common redpolls, whereas the much less common hoary redpoll is easily mistaken for the common. The hoary redpoll is paler and often travels with common redpolls, making distinction difficult. The pine siskins have been visiting in smaller numbers than before; 23 birds counted as the highest daily tally this season. Steffen is unaware of any confirmed white-winged crossbill sightings. 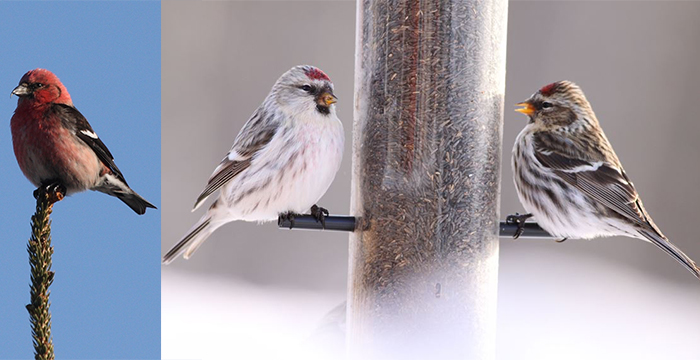 Later migrations are a noticeable effect of the unseasonably warm weather. Steffen was particularly surprised to see sandhill cranes passing overhead so late in the season. These tall, long-necked birds normally migrate each fall from Michigan and Wisconsin to southern wintering sites in Georgia and Florida. Their main reason for moving south is to find wetlands to utilize, rather than a specific food source.

“Usually by the first or second cold snap in November, they’ve passed through Chicago or at least started,” Steffen said. “But this year, we’ve been seeing them migrating in late December and into January, which is very unusual.”

Nathaniel Miller, director of conservation for the Audubon Chicago Region, says Mother Nature may alter the path of some uncommon birds – literally. Miller says birders are expecting the heavy winds of tropical storms from El Niño to alter the flight path of some migratory birds.

“There have been black-tailed gull spottings in Illinois recently,” said Miller. “That’s a bird that’s native to Alaska and the northeast Atlantic. Depending on the intensity of the storm, it can affect migration.”

Assuming they aren't blown off course, the winter finches and other birds can be found throughout the Chicago Botanic Garden – especially at the thistle feeders in the Buehler Enabling Garden. If you have a thistle feeder on your own property, there’s a good chance you’ll be providing much-needed nourishment for these seasonal visitors.

Keep an eye out for them this winter – they’ll be on their way back north before you know it! 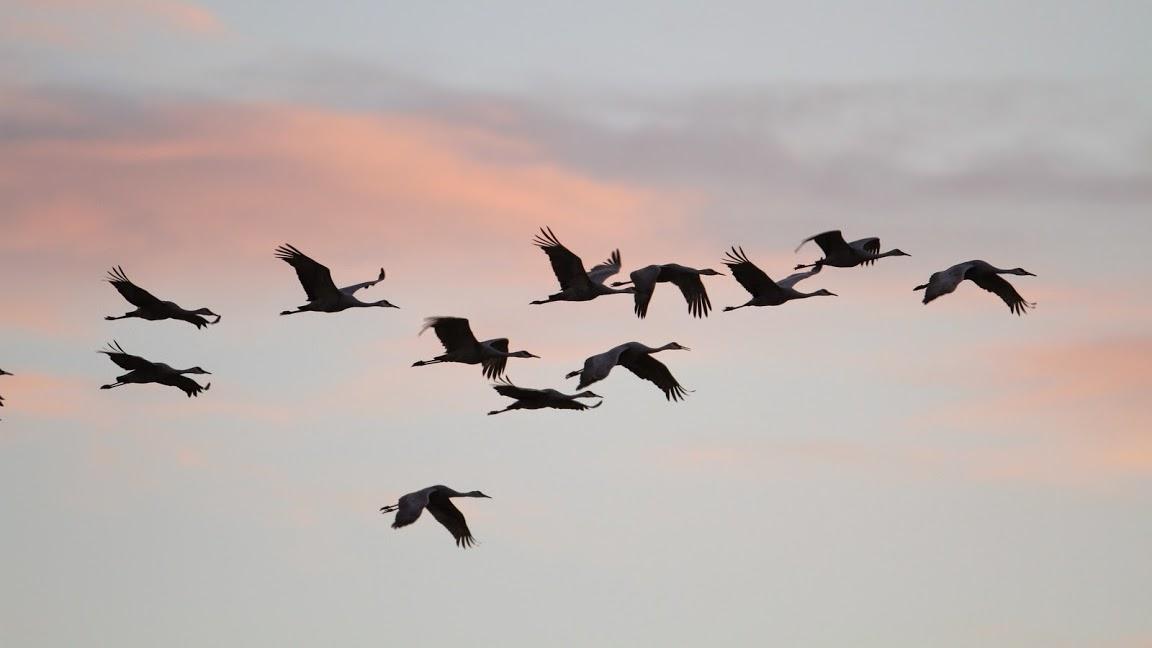 Each fall, thousands of sandhill cranes fly over Chicago as part of their migration to the southern U.S. But last year more cranes than usual flew directly over the city, due in part to an early cold snap up north and westerly winds that pushed them to the lakeshore. We revisit Jay Shefsky’s story that captured these birds in flight. 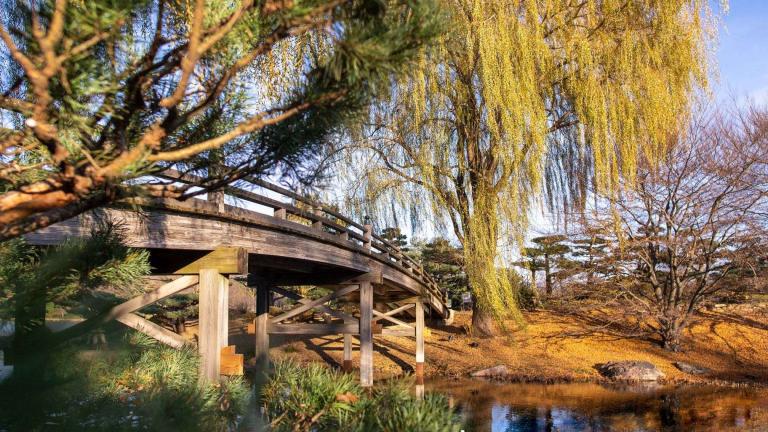 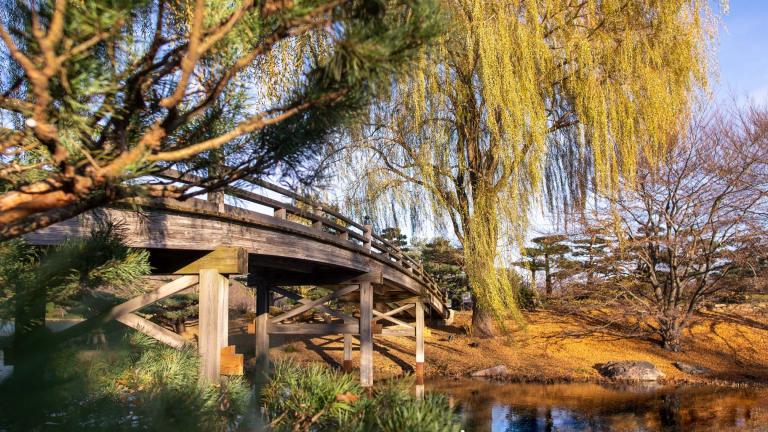