For a number of years, Jessa Crispin was a frequent book reviewer on "Chicago Tonight" as the author of the online magazine Bookslut. But then she moved to Europe where she continued her career as an international and itinerant literary critic.

In the process she wrote her first book, a memoir.

It's called "The Dead Ladies Project: Exiles, Expats and Ex-Countries" and Jessa Crispin joins us Tuesday for a discussion of the book and her recent travels.

"I never really felt, even in Kansas when I was growing up as a child, like any one place was my home," Crispin said of her decision to move to Europe. "I never felt that kind of fairy-tale feeling of security and belonging. I think that was a large part of it too: I had a restless nature–I moved around a lot. And I love Chicago, but it also didn't feel like home in the way that I thought I should have."

When she did return to the city, she holed up for three months in order to write the book.

"I could always write in Chicago," she explained. "Once I removed those pressures I was putting on myself to succeed–to feel like a respectable person–then it became an easy place to be again."

Crispin will also give us her take on the release of Harper Lee's "Go Set a Watchman."

In the New York Times, Crispin wrote a pre-review of "Watchman" in which she said:

It would be nice to think that whatever happens with “Go Set a Watchman,” even if the book really is not good at all, Ms. Lee’s place in literary history — and that of “Mockingbird” — will remain intact. We may not be able to remember anything from Louisa May Alcott’s “Little Women” follow-ups, but their failures do not move the original’s place from our hearts. The canon, however, is a fickle thing. What is classic one moment is outdated or surprisingly flawed the next.

Below, an excerpt from "The Dead Ladies Project."

“You’re in Berlin because you feel like a failure.” 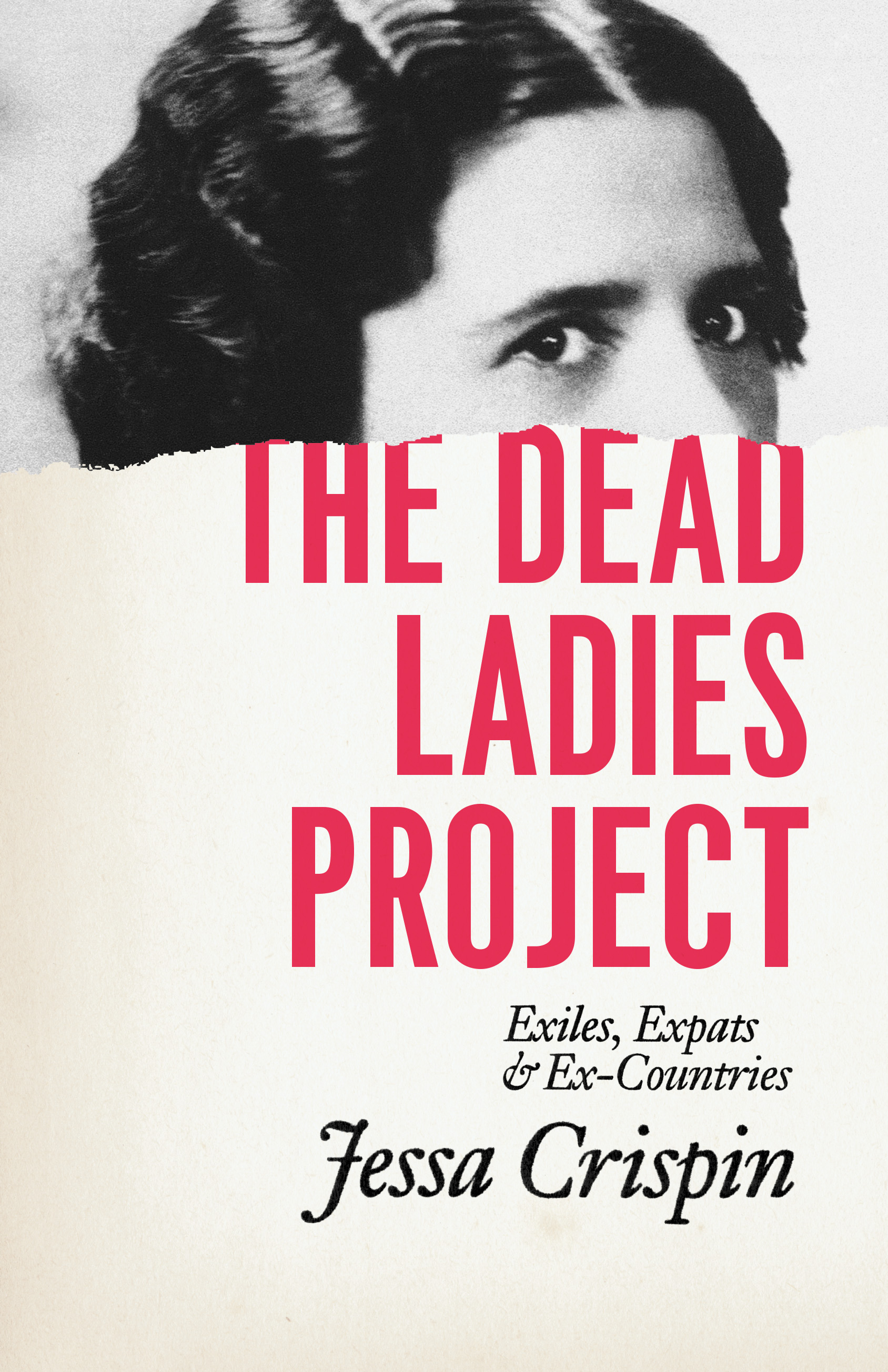 I had met this man all of ten minutes ago and he was already summing me up neatly. I made subtle readjustments to my clothing, as if it had been a wayward bra strap or an upwardly mobile hemline that had given me away. More likely it was my blank stare in response to his question, “So, what brings you to Berlin?”

He has had to do this a lot, I imagine: greet lost boys and girls, still wild with jet lag, still unsure how to make ourselves look less obviously like what we are, we members of the Third Great Wave of American Expatriation to Berlin. This man before me was second on the list of names that everyone gets from worried friends when resettling overseas: Everyone I Know in the City to Which You Are Moving (Not Totally Vouched For). I had lasted about a week before I sent e-mails tinged with panic to everyone on my list. He had been the first to answer.

I must have blushed at the accuracy of his remark, because he immediately qualified it. “Everyone who moves to Berlin feels like a failure. That’s why we’re here. You’ll have good company.” Still embarrassed, I scanned the menu for one of the four German words I had mastered and, failing, pointed helplessly to a random item when the waiter returned. It would prove to be a strange Swiss soda of indeterminate flavor. It tasted like the branch of a tree, carbonated. It was not unpleasant. I had been shooting for something alcoholic, but I was already too laid bare to have admitting to a mistake and reordering left in me.

At this moment it seemed unlikely this American could commiserate. My own failings were too grandiose, the depths to which I had fallen too abysmal. I was narcissistic in my failings, and he looked like he was doing pretty okay. He sat across from me confident, knowledgeable. He had ordered in German. The people in the restaurant had greeted him by name. He talked about artistic projects he was working on. He was certainly sweating less than I was on this hot July day. Later a tale would unravel, one that mimicked the stories of so many of the Americans who had flocked here over the last decade. Unable to survive financially in New York without having to abandon their writing, their art, their music, they came to a city of cheap rents, national health insurance, and plentiful bartending jobs that could cover a reasonable cost of living. He had an apartment. It had hardwood floors. A failure, my eye.

In contrast, there I was, ten days into my new city and still stumbling around like a newborn calf. I was tired of being the person I was on an almost atomic level. I longed to be disassembled, for the chemical bonds holding me together to weaken and for bits of me to dissolve slowly into the atmosphere. It was not a death wish, not really. Not anymore. I was hoping something in the environment, some sturdier, more German atoms, would replace them.

Because there does seem to be something about Berlin that calls out to the exhausted, the broke, the uninsurable with preexisting mental health disorders, the artistically spent, those trapped in the waning of careers, of inspiration, of family re-lations, and of ambition. To all those whose anxiety dreams play out as trying to steer a careening car while trapped in the backseat, come to us. We have a café culture and surprisingly affordable rents. Come to us, and you can finish out your collapse among people who understand.

Let’s say, for a moment, that the character of a city has an effect on its inhabitants, and that it sets the frequency on which it calls out to the migratory. People who are tuned a certain way will heed the call almost without knowing why. Thinking they’ve chosen this city, they’ll never know that the city chose them. Let’s say, for a moment, that the literal situation of a city can leak out into the metaphorical realm. That the city is the vessel and we are all merely beings of differing viscosity, slowly taking on the shape of that into which we are poured.

If that were the case, what to make of the fact that Berlin is built on sand? Situated on a plain with no natural defenses, no major river, no wealth of any particular resource, it’s a city that should not exist. It can’t be any wonder that Berlin has for hundreds of years—no, longer than that, past Napoleon, past the medieval days when suspected witches were lined up at the city gates and molten metal was poured between their clenched teeth, past the whispers of the Romans that those who inhabited these lands were not quite human, back to the days of the people residing here who are now known to us only by some pottery shards and bronze tools—been a little unstable. It would explain the city’s endless need to collapse and rebuild, even as the nation that engulfs it marches on confidently, linearly.

Perhaps its unstable nature is what beckons the unstable to its gates. The Lausitzer. The Jastorf. The Semnonen. The name-less and the preliterate. A shifting bunch of conquerors and the conquered. On through invaders and defenders, and populations reduced by half in war, disease, and the destruction of whoever pulled the short straw for being the scapegoat this century. The process merely sped up in the twentieth, oscillating madly through world wars and grotesque ideas, crashing economies and blind eyes turned.

It plays out seasonally as well here in the northern reaches of Germany. The lush highs of summer, everything green and tangled with a sun reluctant to leave its post at night and overly enthusiastically trying to rouse you from bed in the very early hours of the morning, crash endlessly down toward the darkness of the winter solstice. The trees that had been blooming in a state of fecund glory when I arrived in the city lost their leaves, revealing that the only things behind them were the endless concrete boxes of Soviet midcentury “architecture.” The sun shunned us and rarely peeked out from behind its thick cloud cover. When it deigned to, it gave off all the glow and heat of a porch light. The gray of the sky matched the gray of the buildings matched the gray of the thick coating of ice that remained on the sidewalks all winter. I fell on it one night, or early one morning, I guess, a little worse for wear, accompanied by a man I met at a bar, whose entire seduction strategy was just to follow me home, despite the fact that I kept trying to shoo him away like a stray dog.

I was six months into my Berlin residence. And from my akimbo position I threw the holy tantrum of a sailor-mouthed two-year-old. “Fuck this city. Fuck it. Why the fuck did I ever move here, god fucking damn it.”