#BudgetBeard Campaign Began on May 31 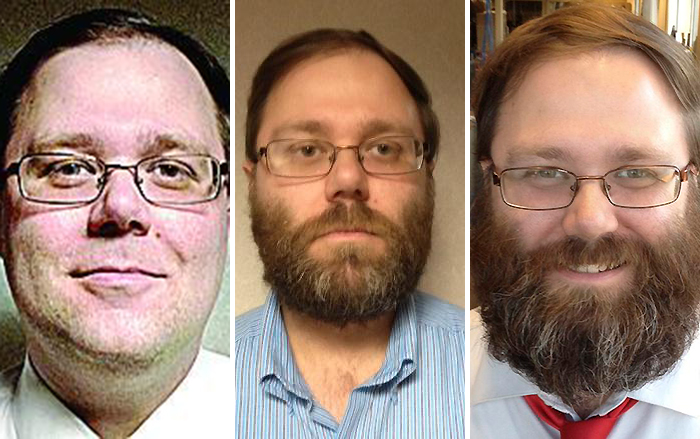 Illinois' state budget stalemate has created a hairy situation for Chris Kaergard, who stopped shaving his beard on May 31 when legislators failed to pass a budget.

The political reporter and assignment editor for the Peoria Journal Star is itching for a budget solution and is using the hashtag #BudgetBeard to raise awareness of the ongoing state stalemate.

So, have you been doing any beard maintenance over the months?

I will admit that I’ve trimmed lightly around the mustache area because it was growing down into my mouth and interfering with me being able to eat comfortably. I rationalized that there’s still state spending going on because of appropriations, court orders and consent decrees, so a short trim up there is at least equivalent to that.

How did you get the idea for the budget beard?

Honestly, it sort of came to me while I was on vacation in mid-May. I thought it was an easy way to represent to readers and people who follow me on Twitter the length of the budget fight. At the time I was thinking it’d be two to three months because historically that’s as long any fights in modern history have lasted.

Have you ever grown a beard of this stature before?

No, I did No-Shave November last year [a cancer-awareness campaign], and I floated that a little into December afterward. I’m typically either clean-shaven or have a well-trimmed goatee.

When you first started growing the beard, did you think you’d still have it as we approach the end of October?

Honestly, I’m starting to worry about the ability of not-for-profits. … All of the not-for-profits—the Girls & Boys Club in Peoria is being funded by donations now. All of their state aid is gone, and they’re keeping the lights on by being reliant on the generosity of donors, and this is coming into a prime giving season. People are asked to put their disposable income into all sorts of charitable contributions. Folks are really relying on them. It’s a scary time, and people continue to be kind to them.

What’s been the reaction from legislators and elected officials to the budget beard? I’ve seen several of them posing for photos with you.

I think they all enjoy trying to raise the profile of it because to some extent they appreciate the problem themselves and are trying to bring light to it. The comptroller [Leslie Munger] is traveling the state to throw light on the budget fight, which means payment delays to service providers. And our local lawmakers here, our state senator and representative, took the same approach to it. If it’s helping to raise the awareness going on, it helps voters to pay attention. I think, candidly, everyone that poses with it, the beard represents their side and their views, and what’s really funny about it is people take pictures with it are very hard-line Democrats and very hard-line Republicans. And it’s not a partisan beard. It’s trying to shed light on the problem, how people perceive the problem is with whatever lens they bring to it.

I’d like to think so. One of the disappointments I’ve had as a reporter is I’ve challenged a number of officials on this, and as a columnist, I’ve been asking them, “OK, you believe everyone needs to come together. What are you doing to bring people together? Show me concrete actions you’re undertaking.” Nobody has had a good answer yet for that. Even though they can rally around a mascot for it, I have yet to see somebody be able to point to me [and say] “Here’s what I’ve done to try and break the logjam and get all sides to move toward an agreement.”

What’s the reaction been like from colleagues? I read a tweet that a coworker didn’t even recognize you in the parking lot.

I came around the corner and they were surprised and thought it wasn’t me. Plenty of people have come up with nicknames like Grizzly Adams or Santa Claus. A number of local officials have taken it upon themselves that every time I come in a room to cover a committee meeting to try and outdo themselves with obscure bearded pop-culture references. We went through ZZ Top, things like that. People keep trying to come up with obscure references. Some people say I look like a Civil War general.

As the budget impasse continues, it’s possible that you could start to look like ZZ Top. Are you ready for that?

It’s a legitimate concern. I went to a charity fundraising event for a local not-for-profit here, and there was a beard contest. I didn’t enter but there were a number of people there who had much more extensive beards and I got some tips from them if this continues another three, four or six months.

In July, I saw that Jim Oberweis joined in the budget beard with you, do you know if he’s kept it up? Or have any others jumped on the beard bandwagon? 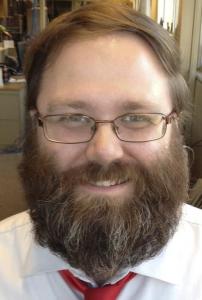 Chris Kaergard on Sept. 25 (Courtesy of Peoria Journal Star) You said you started the budget beard to draw attention to the stalemate. Is it achieving what you’d hoped for?

It is just because it creates a discussion anywhere I go. People will ask what’s the status of this? What are you hearing about it? Who else is seeing the consequences? [I hear that] from people in the know and people who aren’t. And people see me in the grocery store and will say “Hey, man. Cool beard.” I can use that as an opportunity to tell them why I’m doing it. Whether it’s a one-on-one conversation or a group of people, it sparks a discussion and gets people thinking about it. We’ve done updates at the end of every month in the Peoria Journal Star. I’ve had readers send me emails and called me and said they appreciated it as it serves as a check for them on how the situation is evolving too.

What lesson do you hope students at Bradley University, where you’re an adjunct instructor, take away from the budget beard?

A couple of things: on the one hand it shows the consequences of agreeing to do something that you gotta stick with it. More importantly, I’ve used it as a lesson in class on the different ways you can approach a story. No. 2, the distinction in the detachment you have to have between being a columnist and a reporter. I’ve done this more from a columnist end than a reporting end, and I’ve used it show you can use new media by putting things out on Twitter and the photos that can go with it, and the timeline that goes with it as different ways to approach a story beyond just telling people the story.

What’s been the reaction from your family and friends about the budget beard?

My friends have all loved it from the beginning. They were some of the first to adopt the #BudgetBeard with us. Honestly, I think the fun is starting to wear thin as they see me show up to events and gatherings and dinners and I still got it there. The only really sustained criticism has come from my mother, and that’s only because there’s enough gray in the beard that she’s concerned that if I have that much gray, what it must mean for her and her siblings. How old are they if I’m that gray? Everybody else is very tolerant of it and recognize why I’m doing it, and it’ll end eventually.

I’m really looking forward to that. We’re debating whether or not we can do something to help out any of these agencies that have been hurt in the course of getting it shaved off. Readers have come with us on this journey and everyone will see the end point too.

COVID-19 Has Dealt a Blow to Government Budgets. What That Means for Illinois