She's written books exposing Enron and the financial crisis, but Chicago-based business journalist Bethany McLean ("The Smartest Guys in the Room: The Amazing Rise and Scandalous Fall of Enron") claims mortgage giants Fannie Mae and Freddie Mac are the scariest of them all. These two massive, yet little-understood behemoths hold the mortgage debt of millions of Americans.

Housing was at the epicenter of the global financial crisis in 2008. So why after seven years does the U.S. government still have control over Freddie and Fannie? And what could happen if there's another meltdown?

McLean explains what failure could mean for American mortgage holders.

Read an excerpt from "Shaky Ground: The Strange Saga of the U.S. Mortgage Giants": 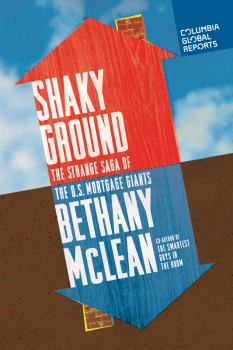 Shaky Ground: The Strange Saga of the U.S. Mortgage Giants

What are the risks remaining to the global financial system in the wake of the crisis of 2008? I have thought a lot about this topic, but I’ve always believed that trying to forecast the cause of the next meltdown is an exercise in futility. One rule about financial crises that seems to hold true is that the spark that lights the fire is never what everyone, or even anyone, was expecting.

Nevertheless, there is a big issue left over from the darkest days of the financial crisis, and while it might not be the cause of an imminent meltdown, it is a festering problem. That is what to do about Fannie Mae and Freddie Mac, the mortgage giants that the U.S. government effectively took over in the fall of 2008 by putting them into “conservatorship,” a state in which they are supported and run by the government. We were supposed to figure out how to resolve these controversial companies—collectively called the GSEs, for government-sponsored enterprises—and maybe even to push restart on the role that the government has long played in promoting and supporting America’s cult of homeownership. But here we are, seven years after Fannie and Freddie were taken over. The big banks have at least superficially paid back the money the government gave them; General Motors and Chrysler are out of bankruptcy; but Fannie and Freddie are still in conservatorship. Even more significant, most of the mortgage market in this country is now supported by government agencies, more so than it was before the financial crisis. The former governor of the Bank of England, Mervyn King, told me this: “Most countries have socialized health care and a free market for mortgages. You in the United States do exactly the opposite.”

It’s a strange state of affairs—but I’ve come to believe that in the world of Fannie and Freddie, strange is actually normal. Start with the fact that although these two companies touch the lives of almost every American who has a mortgage and even many who rent—they determine who gets mortgage credit and at what price, especially today—but very few people understand what they do. They are part of the hidden machinery of the world that makes our lives, in this case our financial lives, possible, but which we never think about—or won’t until there’s a problem. Another oddity about these companies is that while homes are the most domestic asset possible, Fannie and Freddie are global, because through their securities, foreign investors, including the Chinese Central Bank, finance the purchase of Americans homes. This seems like a good thing—it’s globalization at work!—but as the story of Fannie and Freddie shows, it has also tied the hands of the government at critical times.

The story really is a saga, with all sorts of unexpected twists and turns, and conspiracy theories galore. “You can’t make this stuff up,” one long-time lobbyist once told me. “The GSE world is a cross between Monty Python and Shakespeare.” Right now, a group of investors is suing the U.S. government over how it has handled Fannie and Freddie, and while you might think that the investors, which are mostly powerful hedge funds, are only looking after their own dollar—and they are—I’ve also come to believe that they’re looking after the rest of us by providing a check on the government’s behavior that otherwise wouldn’t exist.

I first started writing about the GSEs in 2004, when Fannie had an accounting scandal. Even though I’d been covering business for almost a decade at that point, I still couldn’t believe that anything like Fannie and Freddie existed. They were (and are) unimaginably gigantic companies that were like mythical beasts—part government agencies and part normal companies, with shareholders and boards of directors. There was always an argument that this sort of public-private partnership, which harnessed the power of the government to the discipline of the market, was the best of all possible worlds. But at the time I wrote about Fannie, I was convinced that it was a bad actor. When Fannie executives argued that their enemies just wanted to turn their business over to the big banks, along with their profits, I thought that was just a conspiracy theory. And even if I had believed it, I would have thought, “Well, what’s wrong with that?” I too was a believer in what Frank Raines, Fannie’s former CEO, calls “marketification”: the idea that the free market fixes all.

That was long before the financial crisis, about which even Alan Greenspan, that ardent believer in Ayn Rand’s libertarianism, said in 2008: “Those of us who have looked to the self interest of lending institutions to protect shareholders’ equity, myself included, are in a state of shocked disbelief.” There were lots of villains in the run-up to the financial crisis, which is why Joe Nocera and I titled our 2010 book "All the Devils are Here". And while Fannie and Freddie were two of the villains, by no means were they the only ones. I would have liked to have blamed the financial crisis on them—there would be much more clarity that way, and we’d be able to keep the religion that is marketification alive—but I have never been able to make the facts line up with that narrative.

I’ve never found any simple way to summarize what I think about the GSEs, although I have come to my own view about where we are today and where we should go. I don’t think everyone should agree with me. But I do think everyone should care. What I’ve tried to do in this book is to lay out the facts in a way that I hope will help readers think about the issues and make up their own minds. This is too important to let special interests determine the outcome while we all play possum.