Two Chicago actors are less than a week away from their web series having a shot at a national audience via an online NBC contest.

Chicago actors Bobby Richards and Avery Lee's pilot – Bobby & Iza – is one of five up for the chance at a full-length web series as part of NBC’s Playground contest, which put out a public request for original work last April. The viewer-driven contest, which ends Thursday, encourages those watching to cast multiple votes for their favorite pilot.

Richards and Lee’s pitch – a Chicago actor tries to make it in the city and save up enough money so he and his fiancée can get married –  was selected as one of five out of 2,000 entries that went on to have a pilot produced by NBC. Richards, who based the show on his own experiences as an actor, was already planning to independently produce the material as a web series when Lee told him about NBC's contest.

During one particularly autobiographical scene in Bobby & Iza's pilot, which co-stars Richards and Chicago actress Amanda Drinkall, Bobby auditions for a dog treat commercial which has him maniacally bark at the camera.

“How did it go?” his fiancée asks.

"Any actor friend I know loves that scene," said Richards. "That is literally almost every audition, especially in Chicago where it's a big commercial market. A lot of commercials are legit and fun and then there are the ones that have you run around like a dancing monkey."

Of the five up for the web series, Bobby & Iza is the sole pilot from Chicago writers. Richards, whose comedic preferences tend towards shows like Curb Your Enthusiasm and Unbreakable Kimmy Schmidt, said he sees the series as an opportunity push Chicago style-comedy into an ever-expanding online platform.

"I just think how cool that would be if we could be one of the pioneers who really take network television into that mobile environment," Richards said.

Both Richards and Lee trained at iO, the Near Northside improv theater which boasts a plethora of celeb alumni, including Saturday Night Live vets Tina Fey and Amy Poehler. More recently, iO team The Katydids had their web series Teachers picked up by TV Land - which aired a sneak preview of the full series following Sunday's Video Music Awards.

The Playground contest – and the chance to vote for Bobby & Iza – runs through Sept. 3.

Watch the NBC Playground behind the scenes of Bobby & Iza 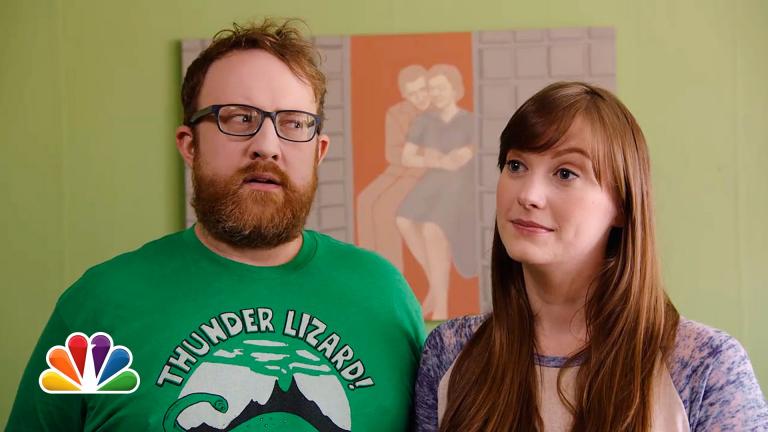