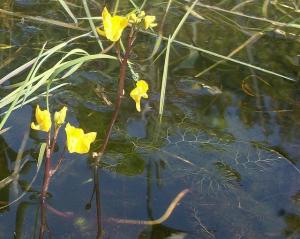 Great bladderwort flowers. (Photo by InAweofGod’sCreation via Flickr) Lurking in the still waters of the Montrose Beach Dunes is a plant unlike its neighbors. The small, carnivorous plant is not easy to spot.

On Aug. 1, the great bladderwort (Utricularia macrorhiza) was discovered by volunteers and research scientists during a trip sponsored by the Illinois Native Plant Society. The team’s sighting of the rare carnivore marks the first of its kind at that location.

“It was neat, really neat,” said Greg Spyreas of the Illinois Natural History Survey, who was on the trip when the discovery was made. “It wasn’t a massive surprise because I’ve seen that plant in the Chicago area before, but the fact that it showed up by itself is really neat, and [because] it’s such a well inventoried site. There are a lot of volunteers who work there and study the area. It wasn’t like somebody missed it. It was just out there.”

The flower of the plant is approximately 3 inches tall and features a bright yellow flower that is quite large in proportion to the plant.

“The yellow flower is gaudy for its size,” he added. “Most of the plant is underneath the water, and we don’t see it.”

Beneath the surface are bladder-like pouches filled with water. On the pouches are protruding hairs that serve as trigger mechanisms for catching prey.

“You get an aquatic invertebrate swimming around the [plant], it hits the hairs [which] releases the mechanism so water comes out of the [bladder],” Spyreas said. “It’s not the shooting out [of water] that traps the prey, it’s the rush of water back into the bladder—it creates a vacuum.” 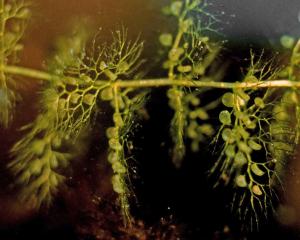 Bladder-like pouches trap prey. Since this type of plant inhabits still, nutrient-poor waters, it gets supplemental nitrogen—something that other plant species get from soil—from the prey it ingests. Types of prey include water fleas and zoo plankton, as well as other small aquatic insects.

While the discovery of this carnivorous plant in the Chicago area may come as a surprise to some, Spyreas says it’s not the only one.

“There are 14 different species of carnivorous plants in the Chicago area alone, and they all tend to be very specialized and very rare,” he said. “Most [people] never notice the plants unless they are looking for them.”

Even though the plant was only recently identified at the lakefront, the great bladderwort is native to the area, Spyreas said.

While it is unknown how the plant got to the Montrose Beach Dunes, the location of its discovery offers some hints. 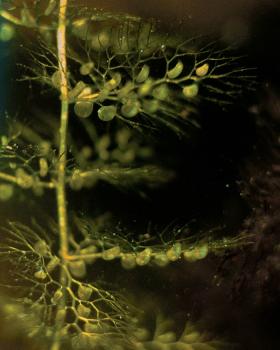 Great bladderwort's bladder-like pouches catch prey. “That area is rather unique: it juts out into Lake Michigan and that Montrose Pier area. Because of that, there’s a lot of migrating birds you see in that area,” Spyreas said.

Birds tend to get things trapped in their feathers, so great bladderwort seeds were likely picked up from one location and then trapped and carried by flight. The seeds could have then fallen off at the Montrose Beach Dunes, according to Spyreas.

Or the seeds could have been there all along.

“Some plants’ strategies are [for] the seeds to go dormant in the soil until the habitat conditions are right,” Spyreas said. “That area hasn’t been a beach habitat in a very long time. It’s less likely, but possible depending on the species.”

For those hoping to catch a glimpse of the newly discovered plants, Spyreas asks everyone to be respectful of the Montrose Beach Dunes ecosystem.

“There’s really good signage. No dogs are allowed in a small portion of the habitat because of the rare birds that nest there,” Spyreas said. “Stay on the trails. Don’t collect anything. Other than that, it’s a gorgeous area and we want people to be out there.”

The Montrose Beach Dunes are part of the Chicago Park District’s more than 50 designated nature areas. The Montrose beach habitat relies upon volunteers to keep the dunes protected and healthy, according to Spyreas. People looking to volunteer to help manage sites like the Montrose Beach Dunes can visit the Chicago Park District’s website for information and a list of nature area volunteer stewardship days.