Meetings and Managers: Why the Office Isn’t Always Great for Work

Author and Basecamp founder Jason Fried joins Chicago Tonight for a conversation about changing the way we work – and why showing up to an office every day doesn't mean we're actually being productive.

In October 2010, Fried spoke at TEDxMidwest on why work doesn’t happen at the office.

“If you actually talk to people and even question yourself, and ask yourself, where do you really want to go when you need to get something done? You’ll find out that people don’t say what businesses think they would say. If you ask people the question: Where do you need to go when you need to get something done? Typically, you get three different kinds of answers. One is a kind of place or a location or a room. Another is a moving object and a third is a time,” Fried said during his TED talk. “You almost never hear someone say, ‘The office.’”

That’s because people working in offices don’t have a work day, but a series of what Fried calls “work moments” in which work is done. 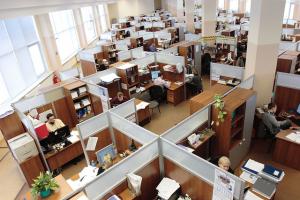 “It's like the front door of the office is like a Cuisinart, and you walk in and your day is shredded to bits, because you have 15 minutes here, 30 minutes there, and something else happens, you're pulled off your work, then you have 20 minutes, then it's lunch, then you have something else to do,” Fried said. “Then you've got 15 minutes, and someone pulls you aside and asks you a question, and before you know it, it's 5:00 pm, and you look back on the day, and you realize that you didn't get anything done.”

Very few people have long uninterrupted stretches of time to work at an office, which is why Fried says people choose to work at home or go to the office when no one’s around.

While some may suspect that work isn’t being done at the office due to distractions, such as access to social media sites, Fried says that’s not the case.

“The real problems are what I like to call the M&Ms, the Managers and the Meetings. Those are the real problems in the modern office today. And this is why things don't get done at work, It's because of the M&Ms,” he said. “Now what's interesting is, if you listen to all the places that people talk about doing work, like at home, in the car, on a plane, late at night, or early in the morning, you don't find managers and meetings. You find a lot of other distractions, but not managers and meetings.”

In order to make the workplace more productive, Fried offered some suggestions in his TED talk:

Our culture celebrates the idea of the workaholic. We hear about people burning the midnight oil. They pull all-nighters and sleep at the office. It’s considered a badge of honor to kill yourself over a project. No amount of work is too much work.

Not only is this workaholism unnecessary, it’s stupid. Working more doesn’t mean you care more or get more done. It just means you work more.

Workaholics wind up creating more problems than they solve. First off, working like that just isn’t sustainable over time. When the burnout crash comes— and it will— it’ll hit that much harder.

Workaholics miss the point, too. They try to fix problems by throwing sheer hours at them. They try to make up for intellectual laziness with brute force. This results in inelegant solutions.

They even create crises. They don’t look for ways to be more efficient because they actually like working overtime. They enjoy feeling like heroes. They create problems (often unwittingly) just so they can get off on working more.

Workaholics make the people who don’t stay late feel inadequate for “merely” working reasonable hours. That leads to guilt and poor morale all around. Plus, it leads to an ass- in- seat mentality—people stay late out of obligation, even if they aren’t really being productive.

If all you do is work, you’re unlikely to have sound judgments. Your values and decision making wind up skewed. You stop being able to decide what’s worth extra effort and what’s not. And you wind up just plain tired. No one makes sharp decisions when tired.

In the end, workaholics don’t actually accomplish more than nonworkaholics. They may claim to be perfectionists, but that just means they’re wasting time fixating on inconsequential details instead of moving on to the next task.

Workaholics aren’t heroes. They don’t save the day, they just use it up. The real hero is already home because she figured out a faster way to get things done.

Reprinted and published with permission.