We sit down with local author Gioia Diliberto to discuss her sweeping new biography of a fashion icon and trailblazer. Join us to learn about her just-released book, Diane von Furstenberg: A Life Unwrapped.

By the time Diane arrived in Italy in July 1972 for her monthly trip, her next collection had gone into production. Looking at the soft mounds of garments piled up, she grew concerned. “I’m very worried because of the quantity of merchandise, but I hope we will sell it all!!!” she wrote Conrad.

One day while working in the factory, Diane saw a fetching wrap top that Ferretti had done for Louis Féraud. “It had dolman sleeves, but also a collar and cuffs, and it gave me an idea,” she recalls. She refined the garment into a top that resembled the type of cover-up ballerinas wore over their leotards. Then she created pants and A-line skirts, some with pleats, to be worn with it. 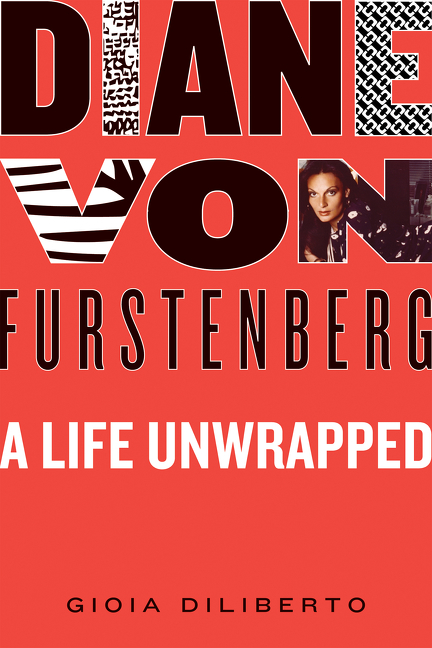 The wrap top was part of a collection that included around ten styles—flowing caftans, a pantsuit, a flannel tent dress, tops, skirts, pants, and jersey shirtdresses “with no zip, no buttons,” as Egon described them.

In the New York stockroom the clothes piled up floor to ceiling, the garments organized by color and style and folded neatly in plastic bags. Buyers loaded their choices into grocery shopping carts. There were only two “dogs,” fashion parlance for flops, says Conrad.  A group of angora dresses failed “because they itched,” and the pantsuit was cut so small no one could get into it, “not even Diane.”

Everything else flew out of the building, and the reorder books filled up. The wrap top and skirt was a huge hit, as were the caftans and shirtdresses. These were clothes whose time had come. Diane had opened her business at the height of an American sportswear revolution that had begun in the fifties. Halston, Stephen Burrows, Calvin Klein, and other young designers, aided by new fabrics and technologies, were refining the idea of fashion for the active life of a modern woman, creating light, easy clothes that were true to the contours and movement of the body.

Upheavals in fashion typically coincide with seismic cultural and political shifts. During the French Revolution, Marie-Antoinette lost her influence on style along with her head, and afterward les citoyennes rejected the queen’s corsets, wide pannier skirts, and towering pouf hairdos for a style of undress—fluid, lingerie-like frocks and loose curls—that embodied the spirit of liberation.

In the burst of modernism following the horrors of World War I, hemlines went up, waistlines and bosoms disappeared, and black, previously the color of mourning, morphed into the standard of chic. Three decades later, in 1947, Christian Dior set the clock back fifty years when he introduced his New Look—full skirts, cinched waists, and boned bodices. Actually, the look was anything but new. It was a regression to the belle époque and a time when women had no status, when the ornate femininity of their clothes signaled their subservience and dependence. In the United States the end of World War II coincided with a yearning to return women to domesticity. Dior’s New Look comported perfectly with the 1950s American glorification of the Wife.

The next dramatic change came in the 1970s. The woman’s movement, the pill, jet travel, and an explosion of youth—by 1970, one half of the American population was under thirty—fed a new ideal of individual autonomy in all things, including clothes. There were no rules anymore, except to do your own thing. In fashion that meant a crazy mishmash of styles—from flowered maxis, floppy hats, and bell-bottoms to fringed leather jackets, pantsuits, space age jumpsuits, and vinyl boots. The dresses offered in department stores and boutiques tended to be either fussy, Frenchified confections or extremely expensive high-end fashion from the likes of Halston, Bill Blass, and Oscar de la Renta. No one was doing a simple, affordable little dress.

As a designer, Diane has always been more interested in the feelings inspired by clothes than in the technicalities of cut and fit. She knows that the true subject of fashion is romance—women in alluring outfits and the emotions they evoke. Sex was a big part of Diane’s life, and the force of her style came from the heat of sex flowing through it. “Feel like a woman, wear a dress,” the slogan she wrote on a photo Roger Prigent took of her in his studio for a 1972 WWD ad, would be frequently invoked by Diane and the media as an expression of her enduring fashion philosophy.

The slogan happened by accident. Prigent, a Frenchman and a friend of Diane’s, had posed her on a big white cube, “but when I saw the photo the cube took too much real estate and looked like a huge white spot,” says Diane. “So I took my dark navy fountain pen and wrote the phrase offhandedly” to fill up the white space. She never dreamed it would stick.