Inspired by Fortune Magazine's 1955 publication of The Fabulous Future in America in 1980, this new collection of essays opens a dialogue about what the U.S. and the world could be like in 2040. Will we live happier, longer lives? Where is higher education headed? How will journalism transform? Northwestern University professor Gary Saul Morson and Northwestern University President Morton Schapiro join us to share their new book of predictions for 2040. 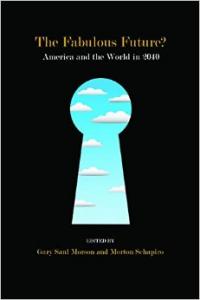 There is a long-standing tradition of making bold, and spectacularly mistaken, predictions about U.S. higher education. So it is with caution and modesty that we hazard a few of our own.

While economists tend to be overly optimistic about growth and prosperity, education experts tend toward unjustiﬁed pessimism. Around 1900, the founding president of Stanford, David Starr Jordan, predicted the imminent demise of the liberal arts college as research universities took their place. Tell that to Williams, Amherst, Pomona, and other top liberal arts colleges, now more selective and richer than ever. For other forecasters, the Great Depression portended the end of higher education as they knew it, with crumpling endowments and reductions in state funding and private giving supposedly leading to long-term educational disaster. The GI Bill, now celebrated as one of the most important pieces of legislation, was at the time resisted by some prominent university presidents who feared the end of excellence associated with educating the masses. Next, educators warned that the large baby boom generation would threaten the nature of institutions unable to expand enrollment quickly enough without wreaking havoc. After that, baby bust pessimists foresaw massive excess capacity leading to ﬁscal disaster. In fact, college enrollment rose.

Today you can’t open the paper without hearing about impending doom. There are no jobs for college graduates; loan burdens are prohibitive as graduates or dropouts struggle to pay off $100,000 in college loans on barista-level salaries; and new technologies are driving the traditional four-year, nonproﬁt, residential model into oblivion. Either tenure will bankrupt the few institutions retaining it or “contingent” faculty with short-term contracts will replace tenured faculty. Exorbitant sticker prices have created a bubble resembling the tulip market of seventeenth-century Holland. Only the foolhardy will major in anything other than science, engineering, math, business, or economics. What’s more, the days of substantial federal research support are numbered. Public ﬂagship universities will continue to lose stature, while the United States will surrender its domination in rankings of the world’s universities.

In short, if this is the golden age of American higher education as some say, by 2040 it will be long gone.

To address these points, we ﬁrst establish today’s facts, some of which will likely prove surprising.

Higher education in the United States is a big business. There are around forty-seven hundred “ﬁrms”— about sixteen hundred public institutions, seventeen hundred private nonproﬁt ones, and fourteen hundred private for-proﬁt schools. Because public institutions are typically much larger than private ones, they enroll almost three quarters of all students. The annual budgets of these forty-seven hundred institutions add up to around $500 billion, 3 percent of the U.S. gross domestic product (GDP). These schools attract a total of twenty-one million “customers,” eighteen million undergraduates and three million in graduate or professional schools. More than eight hundred thousand come from outside the United States (half from China, India, and South Korea), making the United States the world’s largest net exporter of higher education services. Various international rankings agree that the most prestigious institutions are disproportionately in the United States.

Nevertheless, the United States is falling behind other industrialized countries in college attainment. Each fall the Organization for Economic Cooperation and Development (OECD) releases its ranking of the percentage of twenty-ﬁve- to thirty-four year-olds with a higher education degree, and each year the United States seems to lose a spot. At 42 percent, we are at our all-time high, but because other countries have been increasing attainment rates more quickly, the United States currently ranks only fourteenth among thirty-seven developed countries. South Korea, the OECD leader, is at 65 percent.

It may be surprising to learn that of the forty-seven hundred schools in the United States, fewer than 10 percent could be considered “selective.” At most institutions, students are free to enroll having met limited (if any) requirements. Consumers are used to being able to buy a product without proving their worth as potential purchasers. It is thought that colleges and universities are different— with a much larger group of willing purchasers than are allowed to buy. But except for a few schools, that is untrue.

Many of the 150 or so “national” colleges and universities (those drawing from the top students in the United States and abroad) have increased their draw— and their pricing power— over the past few decades. Some are major research universities, including the sixty U.S. members of the Association of American Universities (the AAU), the exclusive group of universities receiving the lion’s share of federal research dollars. Some are prestigious liberal arts colleges.