“Chicago and Its Botanic Garden” 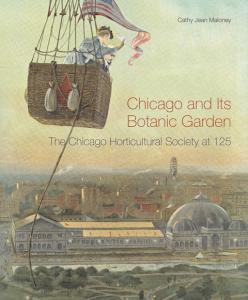 Chicago and Its Botanic Garden

The Chicago Horticultural Society at 125

The Gilded Age to the Garden

Nature does not proceed by leaps and bounds . . .

. . . wrote the famed eighteenth-century botanist Carolus Linnaeus. Nor is a garden built in a day. Ground was broken in 1965 for the Chicago Botanic Garden in Glencoe, Illinois, but the Chicago Horticultural Society labored for decades to turn that first spadeful of dirt. In 1890, in a small meeting room at the now-defunct Sherman House hotel in downtown Chicago, a civic-minded group organized the Chicago Horticultural Society1 for the “encouragement and promotion of the practice of Horticulture in all its branches and the fostering of an increased love of it among the people.”2 The Chicago Horticultural Society, despite world wars and financial downturns, notwithstanding fads and fashions, remained true to its mission, its history intertwining with and contributing to the growth of the city of Chicago and the surrounding region.

Horticulture reaches people in their own backyards, on their dinner table, and at virtually every significant life event. A new baby is welcomed with flowers, brides and grooms pose with bouquets and boutonnieres, newlyweds plant their first tree, the ill take comfort from floral greetings, and mourners sow forget-me-nots in remembrance of lost loves. Since its inception, the Society has enhanced the public and private lives and spaces of the Chicago area through its horticultural programs and partnerships with kindred organizations.

In its early days, the Society orchestrated highly popular flower shows. It participated in the Plan of Chicago of 1909 and the development of the Forest Preserve District of Cook County. Through philanthropic work in school gardens, shelters for disadvantaged women and children, and hospitals, the Society advocated horticulture for health and education. Midcentury, the Society propelled World War II victory gardens into sustained community gardening, resumed the hosting of flower shows, organized garden tours in the city and suburbs, and offered classes throughout the region. Today, the Society serves—at the Garden, online, and at satellite locations—millions of people each year.

Seedling after seedling, flower show after show, garden tour after tour, the Society’s mission dovetailed with the projects and people who built Chicago. Its living legacy has created urban farms in the “city that works” and propagated the love of flowers displayed throughout the “city beautiful.”

Cuttings from the “City in a Garden”

Despite its frontier beginnings, Chicago has had a long horticultural history. The first mayor of Chicago, William B. Ogden, himself an amateur horticulturist, joined the subcommittee responsible for designing the official seal of the City of Chicago in 1837. Amid the soft palette of blues, greens, and yellows, a brilliantly colored crimson scroll proclaims the city motto, Urbs in Horto, which translates as “city in a garden.” At that time, the Chicago landscape consisted largely of swamps, barren sand dunes, and sparsely settled prairies. It took vision and more than a dash of optimism to declare the forlorn site a garden city. Yet Ogden and other civic leaders so believed in the restorative powers of nature and of horticulture as evidence of refined taste that they embraced the slogan as integral to the city’s growth.

More than a slogan, the garden city ideal prompted Ogden and other civic leaders to form the first incarnation of the Chicago Horticultural Society in 1847. This group comprised patrons of horticulture, such as Ogden, and professional nursery owners whose livelihood depended on growing and selling plants to pioneer homesteaders, farmers, and city window box gardeners. Local nurseries played a critical role in Chicago’s growth because many of the plants that had been obtained from established growers on the East Coast simply did not thrive in the Midwest. It became a practical matter of survival to discover trees for fuel, food, and shelter, and vegetables and herbs for sustenance and health.3

Each group in the early Society depended on the other. Nursery owners relied on clients for plant purchases, to act as cheerleaders for horticulture, and, indirectly, to help subsidize experimentation that accompanied new planting methods or varieties. Agricultural schools or government-funded experiment stations did not yet exist, and plant trials occurred at the expense of the private grower. The so-called wealthy amateurs, a nonpejorative term of the day that described horticulture patrons, sought new plants for their own greenhouses and to beautify the city in which they had invested their time and money. This public-private partnership of commercial growers and civic leaders would set a successful precedent for years to follow.