Gloria and Emilio Estefan's Rise from Obscurity to Fame

On the eve of the world premiere of On Your Feet! — a new musical based on the lives of Gloria and Emilio Estefan — Chicago Tonight talks to the couple about their extraordinary life together. 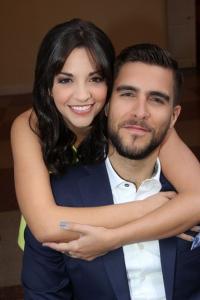 Read an interview with the stars of the show Ana Villafañe and Josh Segarra conducted by Natalie Valdes.

What are your initial impressions of the show?

Josh Segarra: I’ve been reading the script now for a year and a half. I’ve been doing it since the first reading. And I’m just, I’m so happy. It’s cathartic to finally get an audience. The audience is the last character. It’s a crazy thing to tell the story of Gloria and Emilio. It’s life changing, it’s exciting. Their story is inspiring and I get to do it every night. That’s crazy!

When did you meet Gloria and Emilio for the very first time?

Ana Villafañe: I met Gloria for the first time at the final audition which was only my second audition for the show. It was crazy because it was kind of an out-of-body experience. I mean, I was performing her music and being her and saying the lines – I couldn’t even really look at her. But right toward the beginning, when I first walked in, I was crazy nervous. And then there was just a moment of recognition where I actually did catch her eye, and I had done this one specific move that I had seen in one of the videos that I had been watching as research for my audition and I could see in her face that she recognized the move itself. I could tell that she knew I had done my homework. And that’s when it kind of just took off from there. She just gives me a lot of confidence because from the get-go she just kinda recognized something in me that I didn’t even know I had inside me that allows her to trust me with this, which is the part that I think allows me to get on stage every day.

Ana, you and Gloria are both Cuban-American and grew up in Miami, even graduating from the same high school, Our Lady of Lourdes Academy. How has your upbringing influenced your ability to play this role?

AV: The story runs in my veins. It runs in a lot of people’s veins because it’s not just about Miami, it’s the whole Latin culture. It’s that celebration, it’s that passion. And it’s also the struggle of accomplishing something or trying to accomplish something when everyone is telling you, you can’t. But the way we tell the story, I’m able to throw in little Miami-isms. If you notice in the show, I do a lot of mannerisms and faces and little tiny expressions. She does a lot of faces and things that are very Miami. She even says “literally.” So I’ve tried to kind of inject that into the show. We have a lot of fun kinda playing on those stereotypical clichés. But they’re real. They really are real. And so it brings a little flavor to the show that’s different and very, very authentic. 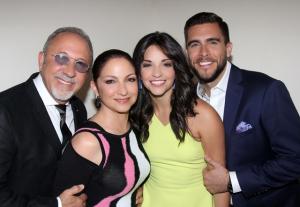 AV: I’ve been acting professionally for a couple years out in LA doing TV and film stuff. And so I begged my manager to let me go in and audition. I was like, “I don’t care who you call, you need to call someone. You need to get me in that room.” I felt a crazy connection to it. I felt like I could do it and not in like an egotistical way, but just because I grew up loving her, I grew up knowing her music, I understand her story and I’m part Cuban so it runs in the veins. That’s when the CEO of my management company emailed a video of me singing completely different music that he just had on his computer and I didn’t know he was sending it. When I got the call, I was like yes, I’m going. So they put me on a plane to New York, the Estefans flew me out. And within 48 hours I got the job. It was crazy. It was my first Broadway audition so I was terrified and I wore like what you think you’re supposed to wear, you know, cause I’d watched like Center Stage and Save the Last Dance and Step Up. So I’m there like in a leotard and dance shoes. And that’s not how it is at all! Nowadays you wear jeans and like a cute shirt. So I thought it was like A Chorus Line.

JS: At the time, I was working on my TV show, Sirens, that shoots out here in Chicago. I went in [for the On Your Feet! casting], did the first reading and after the first reading you know, I hung it up. After those things like that, you can get replaced, you can get fired, or they may go with somebody else. But, after that first reading, I felt really confident. I knew I could bring something to it that hopefully not a lot of other guys could. It’s a story that resonates in my heart. He reminds me a lot of my dad, with a very similar story to my family, what they had to go through fighting stereotypes that people put on them; people telling them that they’re too Latin or not Latin enough. That’s something that I resonate with in this business. You know, I’m a light skinned Puerto Rican dude with blue eyes. That’s kind of confusing to people that don’t know that Puerto Ricans can be light skinned with blue eyes. They think we all look dark with brown eyes. It’s like “no man, my cousins are blonde and they don’t speak any English!” So it’s something that means a lot to me. I’m really proud to be a part of the story and be able to tell the story.

The accent. I’m a Cuban-American from Miami whose dad speaks exactly like Emilio. How did you manage to pick up that distinct accent, Josh?

JS: Okay, you’re a Cuban from Miami. I’m a Puerto Rican from Orlando. I’ve been doing that accent since I was born because my mom has an accent, my uncle has an accent, my dad’s from the Bronx, he’s a New Yor-Rican. I’ve been surrounded by it my whole life. The specifics of the accent I got to pick up from Emilio and I got a bunch of friends in the cast that are Cubano, so every once in a while I heard a couple things that they say or I would hear a couple Cubanismos. You get so wrapped up in the world. I just get to be really free with it. It’s a very big part of who he is and it’s a very big part of who I am on stage… All I care about is that the 305 (Miami’s Zip Code) is happy.

JS: Thank you, Natalie. As long as Miami’s happy with me, then I’m okay. Those are the ones I really don’t wanna upset. 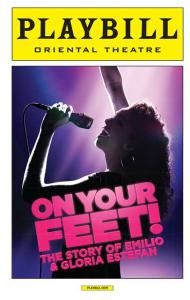 Original members from The Miami Sound Machine are performing live during the actual show. How does that impact the show and influence your ability to play this part?

AV: They are so cool. They’re the coolest because they have the best stories. Hearing their point of view of the story, hearing like, “oh well if you wanna hear how this song got written, we were there.” They have the best insight and so you get little gems of information and it helps with the character. They tell little stories that seem like just memories from back in the day, but for us it’s like “oh that’s what she would do in that situation.” So it’s great to have them around. They just give this ridiculous energy because they’re rock stars.

JS: Man, that’s the best part — just hearing their stories about them when they were younger. Hearing the inside jokes and just knowing that it’s authentic. These guys have been playing this music for years, it’s in their bones. That’s the most special part about our show. Every single person that’s part of this process, their heart is in the process. It’s not just a job to anybody. The show is bigger than all of us individually. We’re all a team here. We’re speaking for our people. And that’s what matters. That’s the story we’re trying to tell. But it’s not just for Latinos. It’s for anybody that’s had to fight for something; for anybody that’s had to strive and battle for what they believe in. Those guys, those musicians, they’re just as proud to be up on that stage as I am, as we are.

What kind of responsibility is it to play Emilio Estefan? 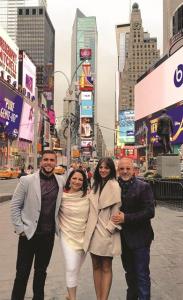 How has the story and this opportunity impacted your life personally?

AV: Hmm. Well, the themes of perseverance and dedication and just being headstrong in what you believe in and in what you’re capable of accomplishing. I mean, that rings true for anybody but especially in the entertainment field. It can be pretty difficult on those days when all you’re hearing is no, no, no, no, no from a million auditions. And I remember what it was like living out of my car in LA for one summer and trying to get my first movie. But I think what I’ve learned more than anything is [to be] trusting [of] other people because the relationship with Emilio is very, very, very central to this show and also the relationship with the mother.  You just have to remember at the end of the day that it’s a team. Nobody gets to where they’re going by themselves.

JS: It’s a big thing. It’s a big thing, Natalie. I never thought that I’d have a job where I get to really represent my culture. Really represent my family. Really talk about what my family went through. Yes, it’s Gloria and Emilio’s story but [it’s] what a lot of us had to go through. I have that line where I get to tell the record executive, “This is what an American looks like.” That’s a very powerful moment for me on stage. Because I’ve been, as all of us have, we’ve been questioned. We’ve been told that we’re not American enough…I’m an American. Yeah, I’m a Puerto Rican, yeah I know we’re a territory. And you’re Cuban and you’re from Miami. We’re all American. And we get to tell a story. It’s really big for me. It’s therapeutic in a way to be able to be on a stage and really resonate with something this important. It’s been a wild ride. It’s been nuts to spend time with the Estefans and see a little glimpse into what their life is like. I’m learning a lot about myself, I’m learning a lot about my people. I’m learning a lot about this process.

Have you enjoyed working in Chicago?

JS: The audiences have been unbelievable. That’s why we wanted to do it here. It’s an audience that’s gonna be constructive and tell us like it is, what we need to change and where the holes are and stuff. So it’s been really great. Chicago is like a second home right now. I’ve been out here for the past three years, so it’s been great.