The New University of Illinois President 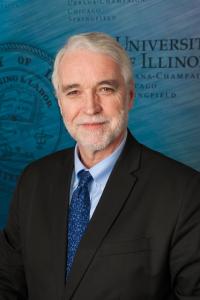 On May 18, Timothy L. Killeen became the 20th president of the University of Illinois. He was appointed president-designate in January 2015.

The University of Illinois is the state’s flagship university system—a $5.6 billion-a-year teaching, research, and economic development enterprise with campuses in Chicago, Urbana-Champaign, and Springfield; a teaching hospital and health clinic system in Chicago; more than 78,000 students enrolled and 20,000 degrees awarded annually; and nearly $1 billion in competitively awarded, externally funded research grants. The U. of I. has a presence in virtually every one of Illinois’ 102 counties.

Killeen, 63, has more than three decades of experience as a teacher, researcher, and administrator in public higher education and in top leadership positions with national scientific research agencies.

He joins the University of Illinois after three years as vice chancellor for research and president of the Research Foundation at the State University of New York (SUNY), where he headed the nation’s largest, most comprehensive university-connected research foundation. In his dual role as vice chancellor for research, he was at the center of SUNY’s strategy for research growth and worked with campus leaders to increase basic, clinical, and translational research. He also chaired a SUNY policy board that promotes economic development by turning research discovery into new businesses, products, and services.

Before joining SUNY, he served for four years as assistant director for the geosciences at the National Science Foundation, an independent federal agency that provides research funding for U.S. colleges and universities. He also has served as Lyall Research Professor at the University of Colorado, as director and senior scientist for the National Center for Atmospheric Research, and spent more than 20 years as a researcher and professor of atmospheric, oceanic and space sciences at the University of Michigan, where he also served as associate vice president for research.

A leading researcher in geophysics and space sciences, Killeen received his bachelor’s degree and Ph.D. at University College London, where he earned his doctoral degree in atomic and molecular physics at the age of 23.

In 2007, Killeen was elected to the National Academy of Engineering, which honors the world’s most accomplished engineers. He also is a member and past president of the American Geophysical Union, and a member of the American Meteorological Society, the American Association for the Advancement of Science, and the New York Academy of Sciences.

He is founding co-chair of the Belmont Forum, which gathers representatives of leading government funding agencies worldwide to collaborate on global climate change research. He is also co-founder of the Science and Technology Alliance for Global Sustainability, an international partnership that promotes scientific evidence to inform decision-making.

Killeen’s research has earned achievement awards from the National Aeronautics and Space Administration, and he has received awards for teaching and research excellence from the University of Michigan College of Engineering.

A native of Wales and a U.S. citizen, Killeen has authored more than 150 publications in peer-reviewed journals, along with more than 300 other publications and papers. He also has served on various White House task forces and has testified on multiple occasions to Congress and the executive branch.

Killeen’s wife, Roberta M. Johnson, has a Ph.D. in geophysics and space physics from the University of California at Los Angeles. She is executive director of the National Earth Science Teachers Association and served as clinical professor in the Department of Atmospheric and Environmental Sciences at the State University of New York at Albany. They have three children.