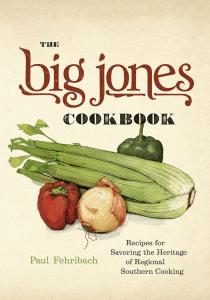 Étouffée is another perfect example of a distinctively regional Southern dish that is often subjected to the preconceived notions of authenticity that develop when folks have a limited experience with one regional variation. With etouffée, it’s most likely to be an exposure to the New Orleans Creolized versions that are very often roux-based and tomato-heavy. In Cajun country, where crawfish etouffée originated, it often has no roux and might consist of nothing but butter, wine, onions, and maybe a few spices. Interestingly, early Creole recipes for smothered fish or shellfish more closely resembles this Cajun recipe than current Creole versions.

Legend (or facts, if you choose to believe the highly credible story) has it that the term etouffée, which means “smothered” in Arcadian French, was first assigned to a dish of crawfish smothered in butter and wine in the late 1920s at the Herbert Inn in Breaux Bridge, when a French-speaking guest wandered into the kitchen and inquired what was cooking for dinner. In full French-speaking mode, the Herbert sister who was cooking replied simply that she was smothering crawfish, which came out as etouffée. Variations of this basic preparation exist from the 1790s in the Creole cooking of the region, more commonly using shrimp than crawfish. Talk about blurring the lines between Cajun and Creole!

Until the 1920s and ‘30s, crawfish were considered lowly laborer food and were still associated more with slave or sharecropper cooking than proper white folks’ food. By the late 1930s and ‘40s, more Cajuns started to “come out” as crawfish eaters, and south Louisiana cooking has never looked back. 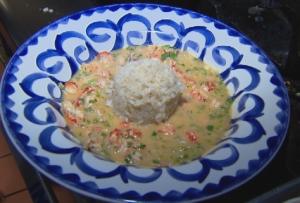 In a 10-inch cast-iron skillet over medium-high heat, melt 2 tablespoons butter until foaming but not brown. Add the onion, bell pepper, celery, and garlic all at once, and stir constantly while cooking until they sweat and turn translucent and soft but not brown, 2 to 3 minutes. Add the white wine and thyme, and bring to a boil while stirring regularly with a wooden spoon. Maintaining a brisk boil, reduce the wine by half, 2 to 3 minutes. Add the crawfish, pepper, and some of the salt, and return to a boil, stirring often. The crawfish will render some additional juice—continue at a brisk boil for 2 minutes to reduce until only 1/4 inch of liquid remains in the bottom of the skillet.

Reduce heat to medium, and stir in the remaining 1/2 cup of butter, stirring constantly until all is melted and steaming hot. Remove from heat immediately once the butter has all melted and you see steam rising from the skillet. Do not boil or the sauce will break! Remove the thyme sprig, and season with lemon juice, Worcestershire, and parsley, plus additional salt and pepper as desired. Serve it up at once with hot steamed rice. 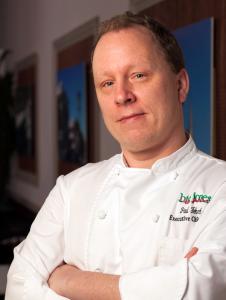 One of the museum pieces of Southern food lore, spoonbread dates to the earliest days of the European settlement and is immortalized in Sarah Rutledge’s The Carolina Housewife (1847) under the name “Owendaw Bread.” By the twentieth century, it was particularly popular in Appalachia and has a storied history in Kentucky, appearing in many of that state’s great cookbooks and garnishing the reputations of some of its finest inns.

There’s more than one way to give the savory pudding-like texture to your spoonbread, the most popular being to change the ratios of cornmeal, buttermilk, and eggs to simply make a softer bread. The less common, and we believe best way per Sarah Rutledge’s receipt, is the ancient method of combining creamy cooked grits (likely samp in the earliest days) with your cornmeal and milk to make the batter. Ours is lightened ever so lightly with the addition of a touch of baking powder—not a totally authentic spoonbread, but I love the soufflé-like texture you get as a result.

A great spoonbread is light as a soufflé yet rich as the most splendid savory pudding. Even on its own, this can make a light meal with a small salad, but it’s great for breakfast, lunch, or dinner, and goes with everything. 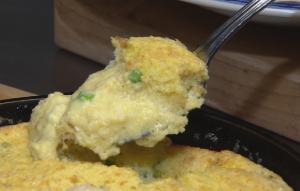 Place milk, cayenne, and salt in a 1-quart saucepan over medium-high heat, and bring to a boil, whisking occasionally to prevent scorching. Sprinkle the grits into the hot milk and whisk in. Pause, allowing the germ and chaff to rise to the top. Use a skimmer or slotted spoon to skim it off. Resume whisking and continue until the milk thickens measurably, about 3 to 5 minutes. Reduce heat to a low boil and continue whisking regularly to prevent sticking and scorching. The grits will take about 40 minutes to cook: They are done when larger grits have a nice bite to them but no hard starchy center, and the overall mixture is heavy and creamy. Whisk in the butter and cheese until fully incorporated and creamy. Remove from heat and proceed immediately to the batter.

In a 4-quart mixing bowl, whisk the eggs until frothy, then beat in the buttermilk. Combine the cornmeal and baking powder in a small dish, and then sprinkle over the buttermilk and whisk in. Whisking constantly, slowly pour the hot grits into the buttermilk and beat until smooth. Add the optional green onion and crackling, and pour batter into the buttered casserole. Bake on the top rack of the oven until light and fluffy, yet set in the center and nicely browned, about 50 to 60 minutes. You’ll know when it’s done when the spoonbread jiggles as a whole mass when gently shaken. If it makes liquid waves in the center, it needs more time. Top with butter and serve with jam or sorghum molasses.