The Threat of "Superbugs"

The World Health Organization warns that the rise of antibiotic-resistant bacteria or "superbugs" means that we could be on the brink of a "post-antibiotic era" in which common infections and minor injuries can once again kill. They say the situation is "so serious that it threatens the achievements of modern medicine." We talk with The University of Chicago's Dr. Robert Daum and University of Illinois at Chicago's Dr. Scott Franzblau about the scale of the threat and what we can all do to try and contain it.

Daum and Franzblau along with several local experts will discuss the current state of the “superbugs” crisis, the causes, and possible solutions in development on Tuesday. The event will be held at 6:00 pm to 8:00 pm at Northwestern University’s Baldwin Auditorium. The event is free and open to the public.

After winning the Nobel Prize for discovering penicillin, Scottish biologist Alexander Fleming ended his 1945 Prize lecture with a warning about misuse of the newly discovered wonder drug:

“The time may come when penicillin can be bought by anyone in the shops. Then there is the danger that the ignorant man may easily underdose himself and by exposing his microbes to non-lethal quantities of the drug make them resistant.”

Fleming’s warning rang true almost immediately. Widespread prescription of penicillin, along with the introduction of antibiotics into animal diets, kicked off an arms race between microbial evolution and human ingenuity.

“Use of antibiotics—including misuse and overuse— aided natural bacterial evolution by helping the microbes become resistant to drugs designed to help fight these infections,” according to the National Institutes of Health.

Penicillin, given to the first patients in 1941, was found to be ineffective against some strains of the Staphylococcus aureus bacteria just a year later. Within a decade, the bacteria developed full resistance, and so in 1960 methicillin was introduced. A year later, methicillin-resistant bacteria strains were discovered, creating MRSA. 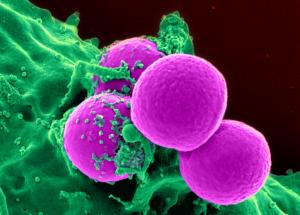 According to the Mayo Clinic, “MRSA is the result of decades of often unnecessary antibiotic use. For years, antibiotics have been prescribed for colds, flu and other viral infections that don't respond to these drugs. Even when antibiotics are used appropriately, they contribute to the rise of drug-resistant bacteria because they don't destroy every germ they target. Bacteria live on an evolutionary fast track, so germs that survive treatment with one antibiotic soon learn to resist others.”

MRSA is perhaps the most notorious superbug, so-called because it is resistant to many penicillin-like drugs and continues to grow resistance to other antibiotics. It’s among a slew of drug-resistant germs that cause 2 million illnesses and 23,000 deaths every year in the U.S.—a threat that has merited an executive order and a national strategy.

Tyson’s announcement comes a month after McDonald’s said it would only use chickens raised without certain types of antibiotics. The Pew Charitable Trusts’ antibiotic resistance project recently released a list of restaurants and food service providers that offer or plan to offer menu items raised without antibiotics. Scroll through the list below to learn about restaurants and food service providers that have locations in Illinois.