Pair of Prominent Artists Explore the Power of "Two"

An artful look at the essence of duality, Two brings together the photos of Melissa Ann Pinney in a new setting. Novelist Ann Patchett, a longtime friend of Pinney, introduces the work and edits a collection of essays on the nature of two. Writers include Barbara Kingsolver, Richard Russo, and Billy Collins. Chicago Tonight sat down with Pinney and Patchett at the Union League Club, which is hosting an exhibition of photographs from Two.

The story of Two starts on the third floor of my friend Melissa’s house, up the narrow stairs to her studio where photographs are framed on the walls and spread across tables and scattered and stacked on the floor. Giant corkboards cover two of the walls in the main room, and on those boards Melissa has pinned dozens and dozens of prints, each one containing some sort of pair: an elderly couple in a swimming pool, a woman with her dog, two winter trees cutting dark lines against the snow.

“I’m starting to think about a new book,” she told me. “Things in pairs. Two things.”

I stood and looked at the wall. I’ve certainly had the experience of reading books that grabbed me from the first sentence, but I didn’t know I could be grabbed from the first image. I’d never encountered a book pinned up page by page before and I couldn’t take my eyes off of it.

Melissa and I first met over photography a dozen years ago when an envelope of her work arrived in my mailbox along with a letter asking me to write the introduction to her book Regarding Emma. I felt an immediate connection to Melissa’s work, to the way she managed again and again to see what was extraordinary in the people and moments that others might overlook—that I might overlook. Not long after that we met in person, and from there we became friends, and then close friends. I helped her sort through prints for her second book, Girl Ascending, and once again marveled at what she was able to do with water and light and time.

Standing in her studio, looking at the sets of figures and objects on the corkboard, the girl in the red cape alone with her shadow, two Amish men staring at the sea, I was struck with both the comfort and the tension these pictures contained. Doesn’t everyone lean towards another? Even as we’re alone, don’t we seek out some other half to fill in our story?

I have a particular talent for being alone. Most writers do. When people tell me they’d like to have a job like mine, I often think that the proof doesn’t lie in the talent or the intelligence you have, or even the story you want to tell, as much as in whether or not you’re able to be alone with your thoughts and make something from them. That’s the thing that sets the writers apart from the people who want to be writers—the ability to remain still and alone for long, unrewarded stretches of time and to fall into other worlds without anyone else knowing or caring. You can be smart and talented and have the most compelling story, but if you can’t make yourself sit down and block out the noise around you, then that story will remain forever in your head. The photographers I’ve known have a similar drive to be alone, though it’s harder for them since they’re so often in the presence of other people. Being alone with other people, concentrating while remaining invisible in a way that makes people forget about you completely, is not a job for amateurs. 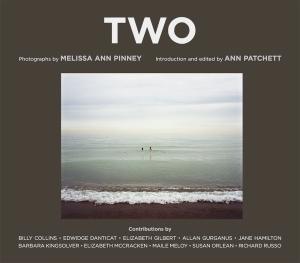 Somehow, it’s my ability to be alone that attracts me to these images of pairs, in the same way that Melissa, alone behind her camera, sees the twosomes in the world around her. Those of us who are best at solitude marvel at the easy comradery of two sisters, two lovers, two cups balanced, one inside the other. Looking at the prints lined up across the corkboard, the book made perfect sense to me. My job would be to make sure this book found its audience.

Why I saw that as my job not only has to do with the nature of friendship and my love for this particular body of work, but also with my changing relationship to books. In November 2011, my business partner Karen Hayes and I opened Parnassus Books in Nashville, Tennessee, and while I had long been a reader and a writer, I was now a bookseller as well. From the first moment I saw Melissa’s pictures, I found myself thinking about how to get this book into the hands of the people who would want to find it. I suggested that we combine the images with a series of essays, essays that didn’t respond to the specific photographs but spoke to the nature of two. My hope was that the words and images would inform one another and expand what we were seeing and reading. Melissa said she was in. I contacted ten writers I know and admire and asked if they would contribute a short essay, or, in the case of Billy Collins, a brilliant poem, on some aspect of two. The work that came back from that barest nudge surpassed all expectations. I received powerful imaginings ranging in every direction—long marriages, devoted chickens, friendships, foot washing. As I’ve said, making art is so often work done in isolation, and while contributing to this book wasn’t about making art together, it was about knowing that your art was going to stand as part of something larger. The photographs and the essays joined to make their own sort of two, not so much a collaboration as a reinforcement.

If I had written an essay for this book rather than an introduction, I would have written about the reader and the book. Book after book after book, this state of two has been one of the longest, deepest, and most enlightening pairings of my life, one that has let me exist both alone and in the world. Books, and this book in particular, have brought me a joy that I would wish for everyone. This is where the story begins.