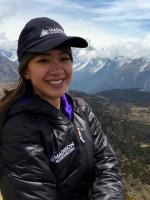 Marisa Eve Girawong, a graduate of Chicago’s Malcolm X College, died in an avalanche resulting from the massive earthquake that struck Mount Everest on Saturday, April 25.

Girawong, a physician assistant with Seattle-based Madison Mountaineering, is one of at least 4,000 victims of the 7.8 magnitude quake in Nepal and its aftershocks.

“We are still just incredibly devastated by the loss of our Base Camp doctor, Marisa Eve Girawong. She supported us throughout the expedition, took good care of us and insured that we were healthy throughout. We are just totally devastated that we lost her in Base Camp due to wind blast from the landslide,” Madison Mountaineering’s Garrett Madison said in a dispatch from Nepal today.

“She was probably one of the few students in our program who didn’t complain about the amount of work required or even the lack of resources. It was really refreshing,” said B. Jang Mi Johnson, a physician assistant who taught Girawong at Malcom X College.

“She smiled a lot. Everybody liked her. She was very intelligent, and she was a beautiful person inside and out. Anyone she came into contact with, she left a lasting impression.”

As the death toll in Nepal continues to rise, medical care will be required at levels the country cannot meet. 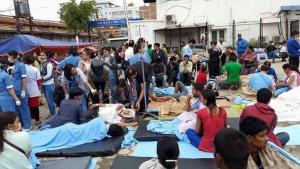 “The local authorities estimate thousands dead. So hundreds of thousands with injuries and disabilities will need to be treated… The need is going to overwhelm all the hospitals,” said Chicago-area orthopedic surgeon Victoria Brander.  “There are 180 orthopedic surgeons in Nepal for a population of 29 million. Their medical system is woefully inadequate and that’s without a major earthquake.”

Brander’s nonprofit medical group, Operation Walk Chicago, is raising funds for its charity hospital partner in the capital of Kathmandu. Located in a valley surrounded by the Himalayas, Nepal Orthopedic Hospital remains structurally intact from the earthquake. But ongoing aftershocks make it impossible to operate indoors and the country’s devastated infrastructure may make it impossible to continue operating at all.

“It’s just chaotic. The aftershocks are profound. The roads are impassable. Electricity is almost nonexistent. Most places use generators that run on fuel and the fuel is becoming limited,” said Brander, who’s been in contact with her counterparts at Nepal Orthopedic. 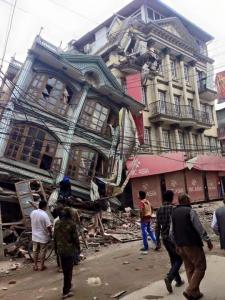 “They think they can get through the next week to maybe 10 days. They’re hoping that roads will open and medical supplies are in. The government is closed. There’s no central communication and no organization. Everyone is on their own.”

Nepal Orthopedic has seen 500 or so patients, at least 60 of whom require emergency surgery, according to Nepal Orthopedic's Medical Director Saju Pradham.

"People were running helter-skelter... There was no room left in the front of the hospital as all patients from the first floor came pouring out in the front open space," Pradham wrote in an email to his collegues overseas.

Yesterday, doctors were able to perform just three surgeries out of 60 scheduled after a 6.9 magnitude quake forced everyone to evacuate the hospital. As patients lay on the grass with open wounds, hospital personnel scrambled to find a tent, plaster casts, food, and generator fuel.

To keep its doors open, Nepal Orthopedic needs $10,000 a week for fuel, water, medical supplies, drugs, and salaries for its staff.  Operation Walk Chicago is currently raising money for the cash-strapped hospital in Kathmandu but plans to send medical personnel to help with amputations, surgeries, and rehabilitation.

View a gallery of post-earthquake images from Nepal Orthopedic Hospital.