Public schools nationally are at a crossroads, according to Joel Klein. After serving as chancellor of the New York City Department of Education for eight years, Klein took on unions, politicians and the status quo to improve public education and give students and parents more choice. Some initiatives succeeded while others failed, and Klein is still seen as a controversial figure in the education community. So what works? And is a new approach better than the systems we have in place currently? Tune in as we discuss with Joel Klein.

Read an excerpt from his book, Lessons of Hope: How to Fix Our Schools. 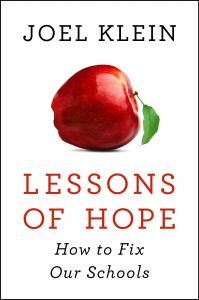 In the wake of the stabbing, teachers at Robeson—already anxious and often discouraged—are horrified, angry, and mournful. Students and parents around the city are concerned. I had known the school was a mess—low graduation rates, gang violence bleeding into the school from a neighborhood now often a battleground, and a faculty close to the breaking point. As the boy fights to survive, I’m tense. Each moment feels shaky.

Thank god, the boy survives, but the fate of the others at Robeson is uncertain. I set out for the school to assess the situation firsthand and to show my support for the people dealing with the aftermath, trying to rally their courage and perseverance. As I drive from lower Manhattan across the Brooklyn Bridge through the gentrified neighborhoods on the other side, I am reminded of Brooklyn’s transformation into a borough of haves and have-nots. Newly affluent communities rim the borough while some parts remain burned-out and decayed. Neighborhoods such as Crown Heights, where Robeson is located, resist the progress that propels the rest of the city.

Fear and frustration are palpable in the halls of the school. Nobody knows why the kid was targeted. Teachers say they are scared just to walk through the Robeson doors. After six years on the job as New York City’s schools chancellor, I know the scenario and how this will play out: Robeson will have to be closed and replaced.

February 12, 2013:  I’m watching President Obama deliver his State of the Union address, turning his attention to the problems of American education. I lean forward, listening attentively as he tells the story of a school I know well, P-Tech, in Brooklyn—housed in what had once been Robeson, the school where the boy was stabbed. He praises it for putting “our kids on a path to a good job,” noting that students there “will graduate with a high school diploma and an associate’s degree in computers or engineering.”

Change had come, kicking and screaming. How did it happen? How had the place that was once Robeson, where basic safety was imperiled, been transformed in fewer than five years into a national showcase? This seeming miracle was brought about by a strategy of change we had inaugurated years before, a program of replacing large, dysfunctional high schools in high-poverty communities with new, smaller schools built from scratch with strong community partnerships. P-Tech itself had grown out of a discussion I had with Sam Palmisano, then CEO of IBM, in late 2010, who told me the tech industry was having difficulty finding students with the skills it currently needed.

I proposed we open a six-year institution in partnership with the City University of New York that would include four years of high school and two years of community college. The goal would be the development of those technology skills too often missing in students looking for work. IBM would partner with us on developing the curriculum, while also supporting the school financially and providing internships for its students. After completing their coursework, students would be eligible to take a certification test, prepared by IBM. If they passed, they would get priority placement for hiring by IBM. Palmisano agreed, and with lots of work by the teams at my department, City University, and IBM, P-Tech opened in September 2011, as my department simultaneously began the process of closing the old Robeson school.

Most remarkable is the resistance we encountered when shuttering Robeson. Despite the school’s wretched performance, the students, community, and teachers union rallied behind it, angrily protesting the closure as they had in so many similar instances around the city. The students are too proud to acknowledge their school’s failure, the community clings to its memories, and the teachers worry about their jobs. This is why school reform is so tough in America: the status quo, even when irreparably broken, has many defenders who will fiercely resist change.

In his speech, President Obama made clear that P-Tech’s success story could not be repeated without a major overhaul of public education. “We need to give every American student opportunities like this,” Obama noted, stating the obvious. What is not obvious to many is this: to succeed, public education needs radical rethinking. That is why I wrote this book.

Read more of the preface.