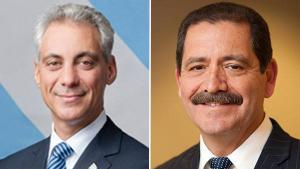 Emanuel’s plan, Securing Chicago’s Fiscal Future: A Strategy to Protect Taxpayers and Bolster Communities Across the City, highlights the mayor’s first term budgets and outlines the fiscal struggles facing the city, as well as questions how García’s plan would achieve financial stability.

In his plan, Emanuel calls for the creation of a casino in Chicago and states that a property tax hike is not out of the question.

“Stabilizing our finances and securing the retirement security of our workers will require us to look to a broad mix of potential revenue sources, but a property tax increase is the very last place Rahm will look to help right the city’s financial ship. The fact is, without any real reforms, relying on taxpayers to foot the entire bill for pensions only makes a property tax increase more likely. And as it stands, without reform a property tax increase will be required in order to make the state-mandated payments Rahm’s administration inherited unless the law is reformed. If a property tax is ultimately necessary in order to save our pension funds even after implementing the reform and revenue framework outlined above, then Rahm ensure that working and low- and middle-income families do not bear the brunt of an increase. There are a number of ways to achieve this, like increasing the homeowner exemption, which hasn’t increased since 2003, and the preservation of the senior freeze.”

García’s plan, Toward Fiscal Sustainability: A New Approach in Prudent Fiscal Management of Chicago, begins with blaming the Emanuel administration for “decline in Chicago’s financial condition.”

The García administration’s plan to turn around the city’s finances is built on four core principles:

García’s plan focuses on creation of intergovernmental agreements between the city and its sister agencies, conducting audits of city departments, and finding new streams of revenue. If elected, García said he would create an advisory transition committee to determine all revenue options for the city, which would not rule out a property tax increase.

“Commissioner García has long been reluctant to increase the burden being shouldered by property taxpayers. However, he will insist on a forthright appraisal of all choices that are available in the short term and possible revenue options available over the long term. The committee’s mandate to present its final recommendations to the Mayor, City Council, and the public within 90 days of their appointment is driven by the imperative to create more stable and fair funding streams for the City that reflect the region’s economic structure and enhance the City’s ability to foster growth in economic arenas ripe for expansion.”