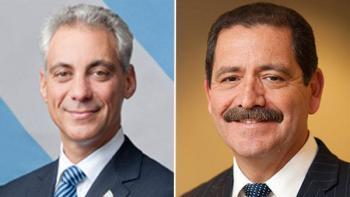 With less than a month until the April 7 runoff election in Chicago, the mayoral contenders ratchet up the attack rhetoric. Both candidates -- Mayor Rahm Emanuel and challenger Jesús "Chuy" García -- have harsh words for the other over who can right the city's financial ship.

The race for mayor is kicking into high gear with the incumbent launching an attack ad that's coming under sharp scrutiny and his challenger picking up a high-profile endorsement.

This afternoon, Willie Wilson, who came in third in the Feb. 24 election, threw his support behind García.

Both García and Emanuel were after that endorsement, but in making his decision, Wilson said that he based it on the feedback he's been getting which was, in his words, García way out in front.

The other question is how supportive Wilson is of García. In the past, he's said he would vote for anybody except Emanuel. Nevertheless, his endorsement could translate into more African-American support for García.

But one has to remember that President Obama is backing Emanuel, his former Chief Of Staff.

García picked up a few other endorsements today at the Cook County Board from four Commissioners: Richard Boykin, Robert Steele, Luis Arroyo Jr., and Stanley Moore.

In the meantime, Mayor Emanuel is taking to airwaves to question Garcia's readiness for the job he wants. In the first major attack ad of this runoff campaign, it purports to use Garcia's own words against him. Watch the ad below.

Some observers have already pointed out that the García quotes used in the ad don't quite give the full message he was making at the time. For example, when he was asked about getting into details and responded that it was a bit much at this point, the conversation was about pension reform and García went on to add that the Illinois Supreme Court decision would determine the course of the conversation.

In response to the mayor’s attack ad, García said today: “It demonstrates I think for him a desperation, so he’s seeking to deflect attention from his performance and engaging in negative campaigning by taking a variety of clips, quoting them out of context, partially, and putting them together to make it sound incoherent. It’s classic negative campaigning. It’s indicative of the mayor, when things are going wrong to turn attention to other things, including fictitious things that he wants to portray someone in a negative light.”

But the mayor is defending the TV ad. At an event this afternoon at a Back of the Yards company where he touted a new city initiative that encourages business entreprenuers to set up shop in some of the city's most economically blighted areas, which he calls Thrive Zones, Emanuel had harsh words for two people on his radar.

On the one hand, he blasted Gov. Bruce Rauner for his propsed cuts to the CTA calling them bad economics and bad job growth.

But he was also asked about the García ad and whether it streched the truth.

“I believe going back to the politics in the past, of making promises that you can’t keep, will break the bank. And we would once again go back to bleeding money, bleeding jobs, and bleeding companies. I think that’s a bad strategy for the city of Chicago," said Emanuel. "I said from day one if we do the necessary things of putting our future first and investing in our future, we’ll grow the economy which helps us put our fiscal house in order.”

García has been criticized for not providing a detailed economic plan for the city but he said today that he will release that document on Friday.

Emanuel also had something to say about an eye-popping comment made earlier this week by one of his aldermanic allies.

On Monday, Ald. Carrie Austin (34th), who's known to sometimes speak off the cuff, made the comment that property taxes in Chicago will have to go up to fix the city's finances no matter who wins the mayoral race.

In response, Emanuel said, “I do not believe and I don’t support the idea that taxpayers should be in the front of the line. The last place you ask  homeowners to do is to pay more. We have not finished our work of reforming the budget so it’s better services done in a smarter and more efficient way.”