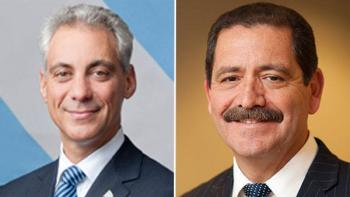 A new poll concludes that Mayor Rahm Emanuel is "very likely" even with challenger Jesús "Chuy" García. The poll, conducted by Ogden & Fry, shows Emanuel up 43 percent to García's 38.5 percent, with 18.6 percent undecided. But, the pollster says the race is even closer than that because his data shows that Hispanics have historically been underrepresented in polls.

The poll, commissioned by online political blog The Illinois Observer, surveyed around 1,000 likely voters and was conducted on Feb. 25, one day after the initial election, and again on Feb. 28, with the results remaining largely unchanged.

"We are not surprised by the results of the latest poll," said García Campaign Manager Andrew Sharp. "We continue to believe that as the city learns more about Jesús "Chuy" García's agenda for change, his support will continue to grow. We have seen a lot of polls over the last few months and we saw the results of the election last Tuesday. One fact remains constant - a majority of Chicagoans do not want four more years under Mayor Emanuel."

Emanuel Campaign Spokesman Steve Mayberry released the following statement in response to the poll: “Chicago voters face a clear choice between Rahm, who has a clear record and plan to create good jobs, and Chuy García, who has failed to get much of anything done in nearly 20 years on the big issues facing the city, but who is all of a sudden making pie-in-the-sky promises and writing checks Chicago can't cash."

Ogden & Fry conducted weekly polls in the run-up to last Tuesday's election. Its last weekly poll correctly predicted the order of finish, and that Emanuel was short the necessary votes to avoid a runoff.

The news comes as State Board of Elections records show that campaign limits have now been lifted in the runoff election thanks to a $110,000 donation made to the Emanuel campaign by the Chicago Forward PAC, a committee that has supported Emanuel allies facing reelection in City Council.