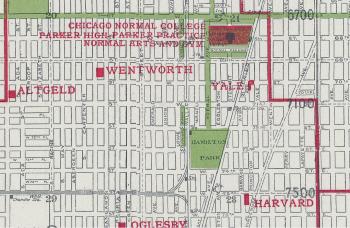 Chicago has three streets in a row on the South Side called Yale, Harvard, and Princeton.  What’s the story? -- Richard Pinto, Burr Ridge

According to cartographer Dennis McClendon, the story is most likely mainly one of marketing. The streets were laid out in the 1870s, and McClendon surmises that the Yale, Harvard, and Princeton streets in Englewood were named because the subdivider wanted to subtly note the proximity to the Cook County Normal School, founded in 1867 (today's Chicago State University). He goes on to note that there are several street name themes that were common among developers over different eras – streets named for developers’ children, for instance, tree and flower names, or as in this case, colleges. In this case, the street names resulted in two impressively named public elementary schools: the Harvard School at 7525 S. Harvard Ave. and the now-closed Yale School at 7025 S. Princeton Ave. 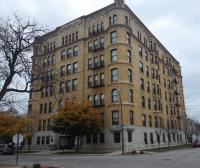 Speaking of Yale Avenue, it lent its name to a historical gem in the Englewood neighborhood – the Yale Apartments at 66th and Yale Avenue. Built in 1893 and designed by architect John T. Long, the seven-story Romanesque Revival building was one of the earliest residential high-rises in the city. Not only is the limestone exterior exquisitely and intricately detailed, the interior is open and airy thanks to an atrium topped with a 25 feet by 80 feet glass and metal skylight (the Yale is one of only two such atrium buildings from that era still in existence in Chicago – the other is the Brewster Apartments in Lincoln Park.). The building had fallen into disrepair over the years, but after an extensive restoration in the early 2000s, it was converted into affordable housing for seniors and was designated a Chicago landmark in 2003. Step inside the Yale Apartments in the web exclusive video below.

I remember a library on Randolph and Michigan called the "John Cedar Library." It was across the street from the old Chicago Public Library. What kind of library was it? -- David Chase, Rogers Park

The library that occupied the northwest corner of Randolph and Michigan from 1921 to 1962 was actually the John Crerar Library, and it still exists, although it’s now part of The University of Chicago. The John Crerar Library was, and remains today, a free public library devoted to science.

The Crerar Library was the brainchild and namesake of a native New Yorker, John Crerar, who moved to Chicago in the 1860s and made his fortune as a railroad industrialist. An ardent Presbyterian, Crerar became deeply involved with Chicago humanitarian organizations; he was a leader at the Chicago Relief and Aid Society, Chicago Commercial Club, Chicago Historical Society, Chicago Orphan Asylum, and many other organizations he considered beneficial to Chicago.

According to a New York Times article, in keeping with his desire to use his fortune “to create and sustain a healthy moral and Christian sentiment in the community,” Crerar’s will left approximately $2 million for the endowment of a free public library that would exclude “all that nastiness and immorality” such as “dirty French novels and all skeptical trash and works of questionable moral tone.” By then, numerous religious, ethnic, and professional libraries were operating in Chicago, so in order to fulfill Crerar’s aspirations without duplicating efforts, the library’s directors opted to focus the Crerar collection on the sciences – specifically biology, medicine, and physical sciences, as well as general science and the philosophy and history of science. Crerar’s personal motto, Non est mortuus qui scientiam vivificavit ("He has not died who has given life to knowledge"), became that of the library.

The Crerar Library was housed in the Marshall Field’s building from 1897 to 1921 until it moved into the building mentioned in the viewer's question, designed by Holabird and Roche and built in 1920.  When the library outgrew even that building (as well as the endowment), it moved to the campus of the Illinois Institute of Technology in 1962. The Crerar Library was an independent institution until it made its final move in 1984 to the University of Chicago, where it remains today under the government of the university. As a condition of its merger with the University’s science collection, the entire collection at the Crerar – comprising approximately 1.4 million volumes – has remained free and public, and Crerar’s inspiring motto is carved on a freestanding limestone entry arch, coupled with the University’s motto (Crescat scientia; vita excolatur – “Let knowledge grow from more to more; and so be human life enriched.”)

The Randolph and Michigan building was demolished in 1981, and today the spot is occupied by the famously sliced and sloped Crain Communications Building, formerly known as the Stone Container Building. 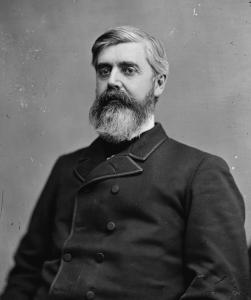 Who or what is the Gresham stop on the Metra Rock Island named after? Thanks! -- Jim Gresh

According to Mary Zang’s book The Chicago 77: A Community Area Handbook, the Gresham stop on the Rock Island District Metra line, located at 820 W. 87th St. in the Auburn Gresham neighborhood, recognizes longtime public servant Walter Gresham. Gresham’s career included stints as Postmaster General of the United States and Secretary of the Treasury under President Chester Arthur, and U.S. Secretary of State under President Grover Cleveland. Ten years after his death in 1895, the railroad station was named in his honor. (The Gresham part of the neighborhood name took hold after the railroad station was renamed.) A Civil War veteran, Gresham is also the namesake of a nearby elementary school in Chicago, a park and a school in his native Indiana, and towns in Nebraska and Idaho.