A seven-week cooking course is teaching middle school-aged children how to plan, prep and produce a good meal; all while learning life skills and building relationships. We join the young chefs during their final stages of planning a special holiday meal.

Most families don’t expect their holiday meal to be prepared by the children. But middle school students are gearing up to do just that at Breakthrough Urban Ministries in the East Garfield Park neighborhood.

Starting with kitchen hygiene and sanitation, they are learning everything they need to plan and prepare a banquet for 30 family members.

And they’ve got pretty impressive teachers. Greg Carso is the executive chef at the Metropolitan Club in Willis Tower. Rick Kroner is general manager. 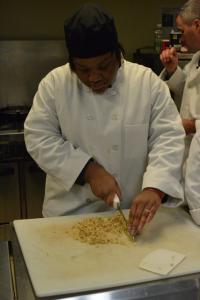 One of the first and most important skills they teach is knife handling.

Seventh-grader Latisha Worlds says she can see a career in the kitchen.

“I wanted to like experience new things, learn how to get my cutting skills real good. Because when I get older, I want to like be a chef, so that’s why I wanted to take the class so I can learn new stuff,” Worlds said.

Using the knife correctly didn’t come quickly for all students.

“It was hard for me at first because I’m left-handed, and they didn’t teach me how to cut right, but then at the end I learned and I would go home and practice like every weekend,” said Jalen Presley.

“I had a parent come up to me, and they were chopping something at home, and then the student came up and said, ‘No, no. You’re holding the knife wrong.’ They corrected the parent,” Carso said with a laugh.

“We haven’t lost any fingers yet, so in three years we haven’t had any accidents,” Kroner added.

The holiday meal will be prepared and served at the Metropolitan Club. The students learn every step -- from menu planning to hospitality, to table setting, to cooking the meal.

“Each step of the way, they help plan their own Christmas banquet for their parents, so their parents will actually come up to the club and they’ll help prepare and serve dinner to their parents on a menu that they have prepared, and all the details will be taken care of by them,” Kroner said. “They’re going to pick what linens we have. They’re going to pick what little drink they have when they first come in, what little fond farewell gift they have when they leave. So all these little touches are going to be, you know, chosen by them. So it’s going to be their menu, their night.”

In addition to learning how to cook, another goal of the program is to expose the students to new and healthier types of foods than they may be used to.

The East Garfield Park community is one of the so-called food deserts in Chicago, where it’s tougher to find fresh, nutritious food. 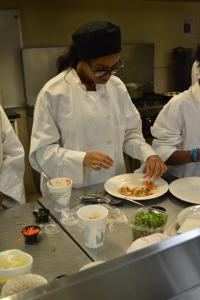 “They really get to work with fresh vegetables and fresh produce. Just the touch of freshness that isn’t always accessible on a regular basis or even internally with our classes doesn’t always happen,” said Gynger Garcia, the associate director of the Breakthrough Youth Network.

“They’re teaching me how to eat different types of food. Just not like soul food and stuff like that,” Worlds said. “I would eat like stuff that wasn’t healthy, like fried chicken and stuff, but now I’m eating like salads and pasta and stuff.”

We asked the students what they’ve learned so far and what’s been the most fun.

“I learned how when you cook, how to like flip it up,” Worlds said. “I like that.”

“You tilt it to the front, and when you throw it up, you make sure it goes back,” Presley said, describing how to flip food. “Make sure you keep your balance.”

And Greg Carso says there is a very real chance that these kids could find food service careers – and not only in the kitchen.

“Alongside of that they’re building relationships with Greg and Rick; they see them each week, they work with them each week. And some of the students in this class have had older siblings in the past year be a part of the class, so there’s just been an excitement that’s built up and so they’re really just growing and developing in a wide range of areas, not just in the kitchen but more,” said Garcia.

The students will serve the holiday meal they prepared for their families Monday night at the Metropolitan Club in Willis Tower.