Travel Back in Time Through Your Window to the World

Geoffrey Baer takes you through time right outside WTTW's front door in this week’s edition of Ask Geoffrey.

I saw a WTTW station identification that features two young women in front of a unique building. Where was this filmed?
-Mark Camilleri, Lakeview 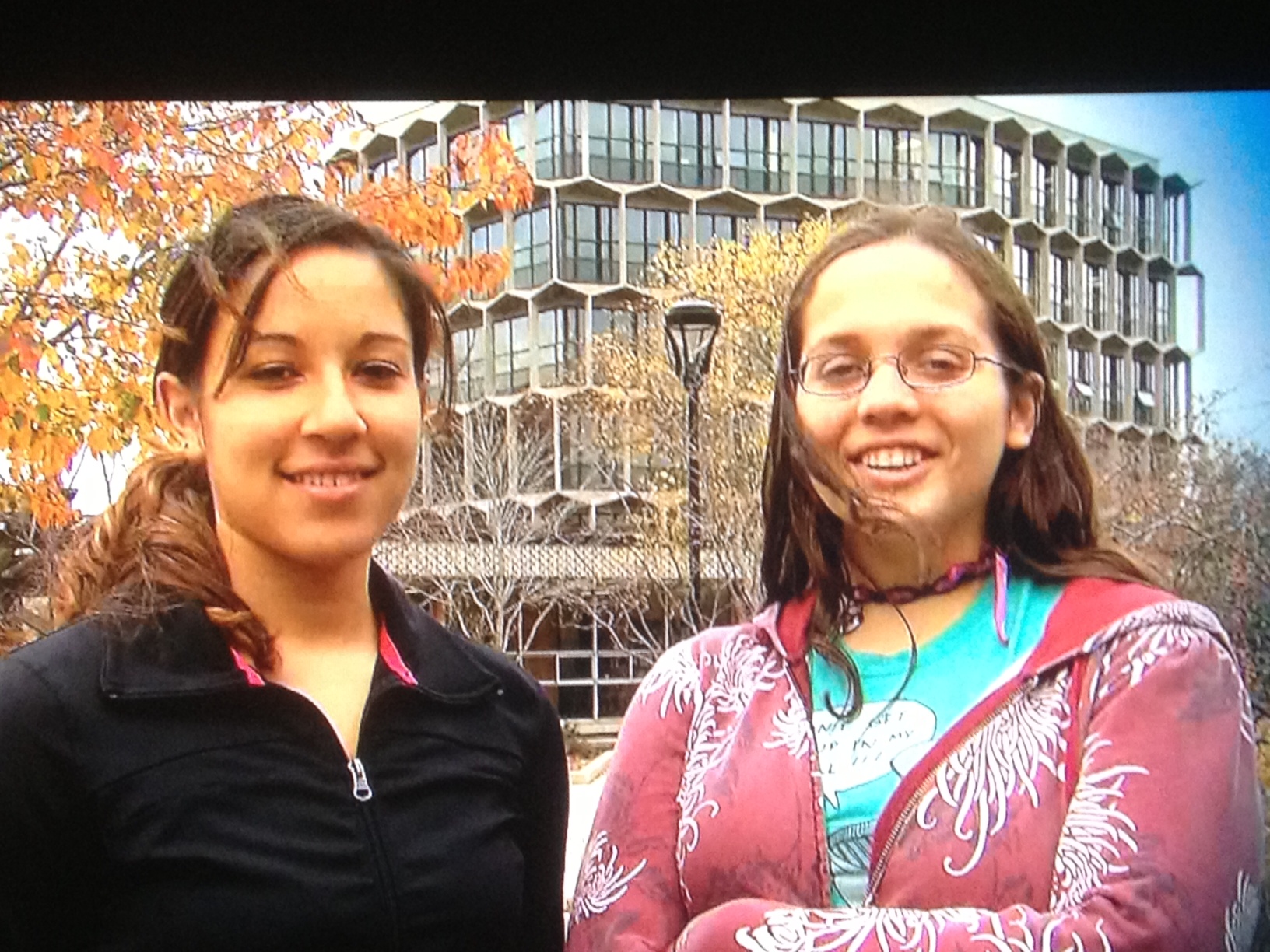 The viewer sent us a screenshot of the station ID in question, which we dug up – you can see it to the right. Turns out, our WTTW film crew didn’t have to travel very far to shoot a station ID that day. It’s the Jerome M. Sachs Administration Building right next door to us on the campus of Northeastern Illinois University.

The mid-century modern office building was named for the university's first president, who oversaw the growth of the school from a Chicago Teachers College into a university between 1962 and 1973. The honeycomb shape of the exterior window wall is why it’s become known as the Beehive. It was built in 1961 and designed by the famous architecture firm of Perkins and Will. The firm was famous for revolutionary school designs like Crow Island School in Winnetka.  The open honeycomb make for an airy and light-filled interior, but a former NEIU administrator wrote that the offices on the south side of the building were virtually uninhabitable on sunny days because of the glare and heat. He reported that he saw a thermometer in one of the offices reach 115 degrees! The office workers had to paper over the windows with newsprint and posters to block the glare until drapes were installed.

He also mentioned a cutting-edge feature in the building’s auditorium. Each seat had a row of buttons on the armrest. Students were supposed to use the buttons to give feedback to the lecturer, who could monitor their responses at the lectern. But the same administrator wrote that the devices never worked.

The building was last renovated in 2010 in part to make the building more energy efficient, but had also undergone some interior renovations to update the offices.

Following World War II, my family was housed in a veterans housing trailer somewhere in an area called Bryn Mawr and St. Louis.  What happened to these areas?
-Irene Corcoran, Arlington Heights 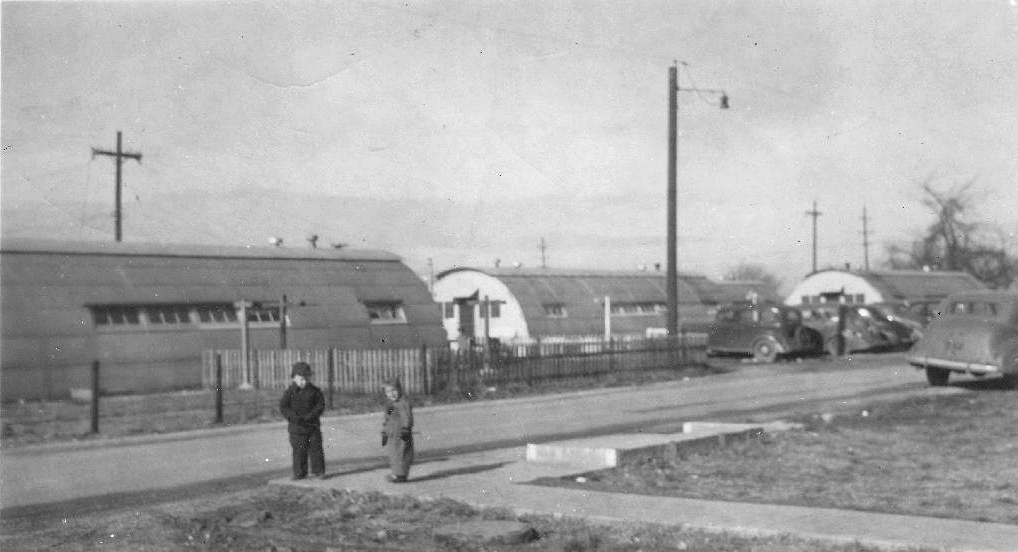 Back before NEIU and its beehive were built, the very same land was used for The Bryn Mawr Homes.  They were part of an ad-hoc program developed by the Chicago Housing Authority to temporarily shelter World War II veterans and their families. That project and others like it were gradually dismantled throughout the 1950s.

During the last years of World War II and in the years immediately after, Chicago found itself with a sudden shortage of housing for returning veterans. So in 1946 Congress created a temporary veterans housing program on an emergency basis. Local housing authorities like the Chicago Housing Authority re-purposed barracks, Quonset huts, and trailers from military bases for veterans to rent until permanent housing could be secured.  Chicago used readily available public lands owned by school boards, park districts and the like. A total of 22 separate temporary veterans projects were built between 1946 and 1948, with more than 3,300 residents in 1949.

Because the program was put together in a hurry, some of the surrounding communities were unhappy that hundreds of these barracks-like structures were unceremoniously dropped into the open spaces near their homes. But we actually spoke to members of an online group of people who lived in another one of these projects, the Thatcher Homes, as children. Some of the members sent us some photos from their time at the Thatcher Homes. Although they acknowledge that the housing was not always in the best condition, they report very fond memories of the tightly-knit communities that resulted. What was intended to be short-term housing wound up lasting much longer, well into the 1950s.  By that time, many of the structures were in bad shape and they had to be demolished. The Bryn Mawr Homes were among the last to be decommissioned in Chicago between 1953 and 1955 according to the CHA’s Annual Report.

What is the history of the oak trees on the Northeastern Illinois University campus?
-Susan Duffy, Rogers Park 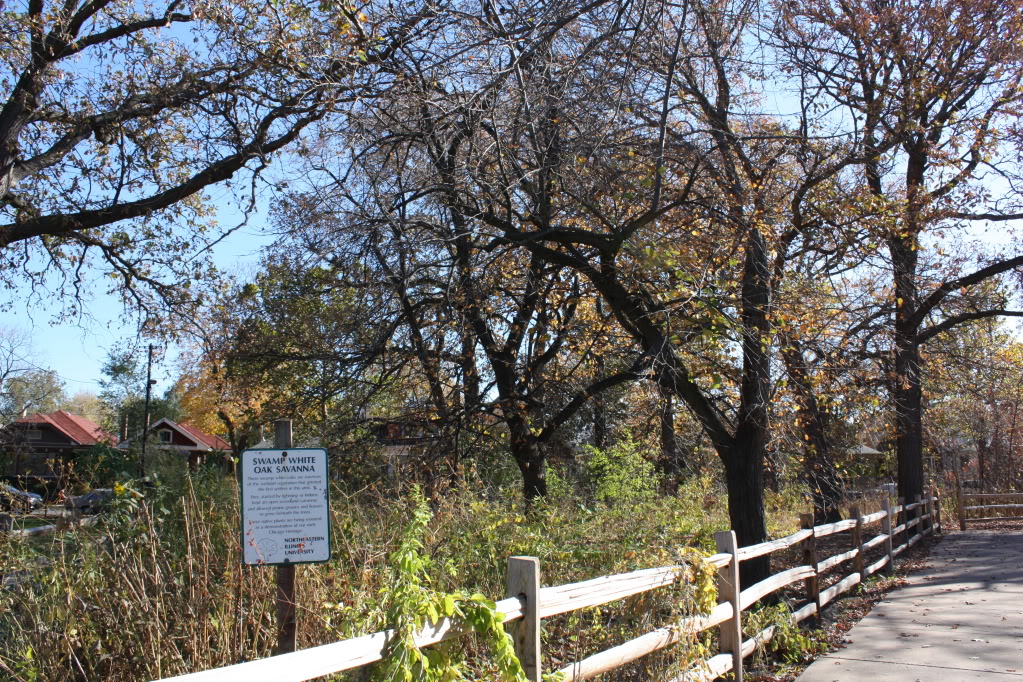 So, this is actually a question we received and answered a while back, but we thought we’d revive it for the time machine. Just south of the WTTW studios on St. Louis Avenue, there is a little acre of what Chicago looked like centuries ago. The swamp oak savanna on the Northeastern Illinois University campus is an experimental urban natural area established to preserve native Illinois plants, trees, and grasses. Nearby a tree called the “solitary oak” stands – a swamp white oak that is between 200 and 250 years old!

The grove lets students and neighbors see what the land looked like before it was built upon, when the city in a garden was more like a farmland in a swamp. Much of the area was soggy grassland with scattered trees. In the early spring or late fall, NEIU students and faculty from the geography and environmental studies and biology departments conduct a carefully controlled burn of the savanna to emulate the seasonal fires that happened before the city was established. Fires started by either lightning or Native Americans would open up the woodland and allow prairie plants and grasses to grow. The oak trees’ thick bark means they survive the burn. Neighbors – including WTTW employees – often come out to watch the event.

The grove almost didn’t survive the university’s growth on campus. We spoke to Bill Howenstine, who was a professor of geography and environmental studies at the time. He said that his department began taking students to visit this grove of oaks in 1982 to learn about the Illinois ecosystem. But new campus buildings were being planned that threatened the grove’s existence. One of Bill’s students wrote a research paper with a plan to preserve the savanna. That student was working through Christmas vacation in 1984 when he saw workers cutting a seven-foot trench into the savanna to drain it, and he sounded the alarm. Word went up the chain right to the school’s president, who rushed to the site along with faculty members. When the president was brought up to speed, he agreed that the savanna should be preserved and the student’s plan was put into place. So the grove remains a little window to the past near our window to the world!