Geoffrey Baer cruises down the neon highway, revisits the toll roads of yesteryear, and recalls the days the sport of kings was king in Chicago sports. 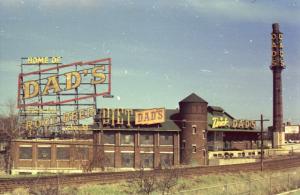 I am working on some art pieces that involve three childhood landmarks along the Kennedy Expressway, including the Dad's Root Beer smokestack. I can't remember the colors of the neon on the Dad's Root Beer sign. It would first flash, all vertically, "Dad's" and then "Root" and then "Beer"--one word at a time on the same smokestack. That sign, in particular was the source of endless giggles for us as we drove home from the South Side. Usually some portion of the neon wasn't working, so sometimes it read, "Dad's Rot Beer," or "Dad's Root Beep," or the rare "Dad's Poo Beer," which would send us into fits of 8 and 9-year-old giggles. Do you know if a photograph exists, at least of the "Dad's" part of this sign, in all its properly lit glory? And, if anyone can tell me what color the "root" and the "beer" were?
Kate Maver, Arlington Heights

The Dad’s Root Beer plant in Avondale along the Kennedy was festooned with signs that advertised its namesake root beer and other fizzy beverages. The big sign on the roof blared “Dad’s tastes like Root Beer should,” and a smokestack flashed the Dad’s logo, followed by “Root” and “Beer” in succession. Dad’s Root Beer is still available in stores, 80 years after it was developed by Barney Berns and Ely Klapman in the basement of Klapman’s Chicago area home -- but it’s not made in Chicago anymore. Berns and Klapman sold the rights to Dad’s Root Beer in the '70s. The Avondale factory became a warehouse for a time, and is now a condo development.

The viewer also mentioned the Magikist sign, a bright red pair of curvaceous lips that advertised a carpet cleaning company near the Montrose exit on the Kennedy. Other sets of Magikist lips puckered up on the Dan Ryan, the Eisenhower, and downtown. They were put up in the 1960s. The Loop set of lips even made an appearance in the classic 1980 movie "The Blues Brothers," when Jake and Elwood Blues drove past it. One smaller Magikist sign still survives and you could have it on your property! A West Coast gallery put it up for sale on eBay last year. A Chicago man named Mike Perrone kissed nearly $4,000 goodbye to bring the 13-foot-wide lips back to Chicago in 2013, but he hasn’t yet found a permanent place to display them. So if you have some space on your roof to blow a kiss of nostalgia to Chicago drivers, contact him at magikistsign.com. 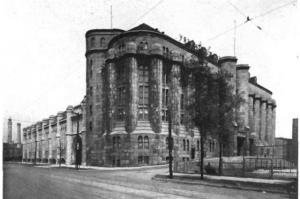 In the early 1980s, I would go to the armory near the Water Tower to watch indoor polo matches. What is the history of the armory, what became of it, and who sponsored those polo games?
Jim Carper, Glencoe

If you’ve visited the Museum of Contemporary Art, a block east of the Water Tower that is where the massive Chicago Avenue Armory stood from 1907 until 1993. The imposing design by the famous architects Holabird and Roche featured multiple turrets, and several additions over the years. And it was indeed the home of indoor polo matches in Chicago for decades.

It was one of several National Guard armories built in Chicago partly in response to labor uprisings. In addition to housing weapons, the armory had large indoor parade grounds for foot soldiers and cavalry.

All that space and arena seating made it a perfect location for an indoor version of polo, a sport that was often used to train cavalry regiments. It’s sort of like hockey on horseback. Players use mallets to knock a ball into the opposing team’s goal.

The sport was actually a pretty big draw in Chicago sports for a time. The Chicago Polo Club started in the 1890s, but matches weren’t played at the Chicago Avenue Armory until 1925.

In 1949, the Illinois National Guard created a polo league, and the Chicago Avenue Armory became the center of Chicago’s polo action. The Guard’s elite ceremonial Black Horse Troop was made up of the crack polo players who took on other Guard teams and civilian teams alike. Teams from the Chicago area as well as Milwaukee and Detroit played matches every Saturday night from November to April, attracting as many as 4,000 spectators a game.

Despite polo’s lofty reputation as “the sport of kings,” in Chicago it attracted all kinds. One Chicago Tribune account from 1982 described the crowd as split between folks wearing blue jeans and munching potato chips, and well-heeled fans in furs dining on pâté and fondue.

The last season of polo turned out to be in 1982 at the Chicago Avenue Armory, when the National Guard reclaimed the space for guard units and equipment. The state sold it a few years later in 1987 to the Museum of Contemporary Art. 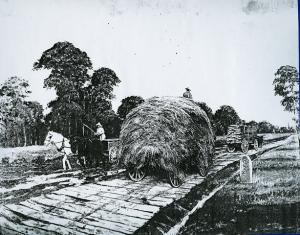 As a little boy, my grandfather said he would carry a penny toll when the folks traveled to the city from Niles down Lincoln Avenue. When was Lincoln a toll road?
Kris Johnson, Northfield

Lincoln Avenue was indeed a toll road from about 1867 to 1881. It was a marvel of transportation technology for north suburban farmers looking for a reliable road to the city to sell their produce.

The suburbs around Chicago used to be mostly farmland. When the farmers loaded up the truck and headed to the city, they often were confronted with muddy, rutted roads. So local entrepreneurs devised wooden plank roads to keep truck and cart wheels from getting stuck in the mud. Three-inch thick timbers were laid across two wooden rails like floorboards. The road builders charged travelers tolls to get to the city to cover the cost of maintaining the roads, since being wood they would rot and decay, or the planks would even get stolen.

According to Chicago historian Dennis McClendon, six major plank toll roads were built to connect the city to farmlands. A man named Henry Harms planked Lincoln Avenue in 1867 from Niles Centre (which is now Skokie) to Division Street in Chicago and set up a toll gate at each end. Our viewer’s grandfather mentioned a penny toll. But it might have been much more expensive. One report said that the tolls on the Harms plank road were a dime. But most sources indicate that this was way lower than was charged at other toll roads, as much as $10 per ton for every 20 miles. Henry Harms, who actually ran the toll gate himself for a while, would allow some farmers to pay their tolls by doing some of the labor to maintain the road.

The Harms plank road, which was then known as Little Fort Road, was built at the tail end of the plank toll road era. By that time most of the other owners of plank toll roads had found that the cost and effort of maintaining the planks outpaced the profit generated by the tolls and resurfaced them with gravel.