Broadway-themed boats, the German Day parade, and "Romeo and Juliet" in the park; Chicago Tonight knows what’s going on this weekend.

This year, Navy Pier and the Chicago Yachting Association are highlighting “Broadway on Parade” on the South Dock. The Saturday evening event begins at 8:30 pm, and will feature lighted boats decorated in the themes of “Wicked,” “Annie,” “Grease,” “The Phantom of the Opera,” and of course, “Chicago.” This free parade will be accompanied by music and followed by a fireworks display. 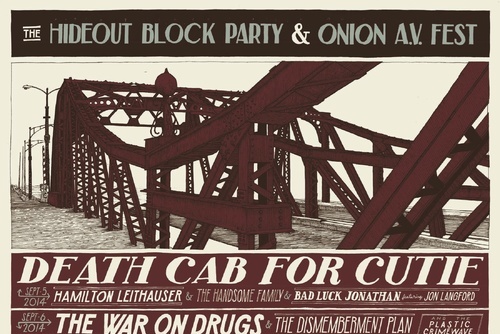 On Friday and Saturday, The Hideout will host bands such as Death Cab for Cutie, The Dismemberment Plan, and The War on Drugs. The Block Party prides itself on being a low-stress and family-friendly festival, and plans on continuing that tradition in 2014. Tickets range from $39 to $65, with a portion of sales going toward Chicago charities, including Rock for Kids.

Don’t be fooled by the name; German Day Festival runs from Friday through Sunday in 2014. On Saturday, the Von Steuben German Day Parade begins at 2:00 pm and continues north on Western Avenue, ending in the festival area. Events are free on all three days.

Midnight Circus in the Parks

The Midnight Circus comes to Ogden Park on Saturday and Sunday at 3:00 pm. Under the big top, view acts ranging from acrobats, aerialists, and other eccentric performers. Tickets range from $15 to $20, with proceeds benefitting the Chicago Park District.

Romeo and Juliet in the Park

For the last time this summer, get swept up into what Muse of Fire Theatre Company calls, “the most famous love story in the English language.” On Saturday and Sunday at 3:00 pm, enjoy outdoor, free performances of Shakespeare’s “Romeo and Juliet.”