Geoffrey Explains Why There’s a Fish in a Tree, More

Why is there a trout among the trees alongside Golf Road? Geoffrey Baer tells the story of the one that got away and answers other viewer questions in tonight’s Ask Geoffrey. 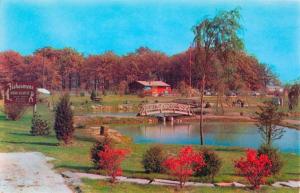 On Golf Road just east of the Tri-State, there is a remnant of a sign advertising a trout farm.  What is the history of the trout farm?
Patrick Moorhead, Deerfield

It’s hidden behind maple saplings and overgrown vines now, but look closely in the brush on the south side of Golf Road just east of I-294 and you will indeed see a giant rainbow trout leaping into the air. Look a little further back, and you’ll see the fisherman waiting to bring in his catch.

The business the sign advertised was Fishermen’s Dude Ranch, the brainchild of a man named John Reding Sr., who was originally in the sand and gravel business. When they had a pit leftover from mining sand in Des Plaines, Reding decided to fill the pit with water, creating a lake and several ponds to stock with fish that people could catch for a fee. He called it Fishermen’s Dude Ranch after he was inspired by his secretary’s vacation at a dude ranch out west.

Reding decked the property out like an old-time country fishing hole and opened for business in 1956. The next year Reding bought a farm in Missouri to supply trout, the most popular fish, and he contracted out for other fish, like bass, catfish, and northern pike -- all this to supply the 16-acre lake and two half acre ponds with enough fish that a catch was almost a certainty. The giant fiberglass trout and fisherman were added to reel in passers-by in 1965. A motor underneath the sign moved the fish back and forth so it looked like the fisherman was hauling it in.

WTTW’s own Wild Chicago visited it in 1989! Check out the segment:

The lake was open for fishing year-round. There was a comfy lodge with a fireplace for fishermen to warm up after a day of ice fishing when the ice was thick enough, and even fish-themed miniature golf courses for the kids.

In the ‘90s, just $2 would get you in the gates, and for another $1.25 you could bring the kids. Fisherman kept and paid for their catches by the pound. According to a Chicago Tribune article, on a nice day the Dude Ranch routinely attracted more than 1,000 fishermen.

John Reding Sr. passed away in 1971, but his wife Mary Anne and son John Jr. kept the dude ranch going.  After Mary Anne died in 1994, John Jr. maintained operations for a few years, but in 1999 he closed Fishermen’s Dude Ranch and sold the property to developers.

But the Redings’ memory lives on in the area – they lived directly across Golf Road from the ranch. The street where they lived is named Reding Circle to honor John Reding Sr., and Lake Mary Anne, which Reding Circle embraces, is named for his wife.

As for the giant trout sign -- we spoke the current owner of the site. He said that right now there’s no preservation plan for the sign, but the land is currently for sale! So if you’ve got the money, you could catch yourself a fiberglass fish that would look great over the mantel. 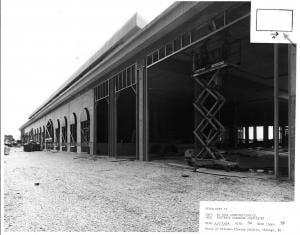 What was the limestone masonry wall outside of River City originally part of and how old is it?
Miguel Cruz, Old Town

River City is the futuristic residential and commercial complex along the south branch of the Chicago River just south of downtown completed in 1986. The curvy shape resembles that of Marina City because it was designed by the same architect, Bertrand Goldberg. But what’s odd is that at the base of this futuristic building along Wells Street is a rough stone wall with arches in a much older style, like an ancient Roman aqueduct.

We found a tremendous number of conflicting theories as to the wall’s provenance. Some sources told us unequivocally that the wall was leftover wall from Grand Central Station, a huge railroad terminal that stood two blocks to the north, but the station didn’t extend this far south. However, extending south along Wells Street from the station is an old stone viaduct that looked a lot like the wall at the base of River City. Architectural photographer Ron Gordon provided the photo at right of the viaduct.

Various experts we consulted theorized that either the old wall was torn down and moved one block south and rebuilt at River City, or a new wall was created either from stone or molded concrete to in a sense to extend the existing viaduct wall along the face of the new complex. We took a look at some of Goldberg’s architectural drawings which are now housed at the Art Institute’s Ryerson and Burnham Library among his papers.

On the right is the existing viaduct, and on the left is the River City wall with a notation reading “reproduce masonry pattern of existing viaduct.” The architect’s son Geoff Goldberg said plans constantly changed during construction.  The “existing wall” referred to in the plans may have been one on the actual River City site.

City of Chicago historian Tim Samuelson believed the wall was original and became so obsessed with our question that he hopped on a Divvy bike and went to investigate. After examining the wall Tim determined that in fact it was not original, nor relocated. It’s a concrete wall faced with thin panels of Indiana Limestone which is verified in these construction photos from Ron Gordon, and Ryerson and Burnham. In the words of Geoff Goldberg, they made a “new old wall” – and today, it stands to remind us of the railroad system that dominated the South Loop landscape for so many years. 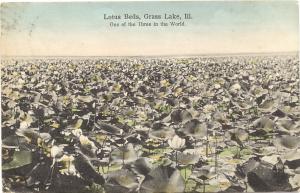 There used to be lotus plants on Grass Lake in the Chain O’ Lakes.  I heard they were very rare.  Do they still exist?
Mary Foley, Waukegan

They do! The beautiful lotus beds still bud and bloom on the surface of parts of Grass Lake, but it was touch and go for a while whether they would survive to be enjoyed by future generations.

Modern day Chain O’Lakes and the nearby town of Antioch are best known as a playground for powerboaters and partiers. In fact, for many years it was even a vacation hangout for Prohibition-era gangsters!

In its earliest days, though, it was a peaceful paradise of natural beauty and abundant fishing. The most spectacular display of natural beauty came in midsummer, when floating beds of American lotus would cover the surface of Grass Lake. Locals offered steamboat tours and visitors would pick bouquets of the blossoms. They could even buy bottles of lotus scented perfume.

But all that tourism took its toll on the lotuses. In the 1940s, a dam built over the Fox River raised the water level of the lake, which uprooted the lotuses, and powerboats ripped through the beds, churning the water and destroying the plants. Pretty soon, the lotuses were very close to disappearing forever.

In 1984, the Fox Waterway Agency was formed to help clean up, protect, and improve the waterways while still promoting recreation. And since then, the lotuses have made a comeback in no-wake zones of Grass Lake.

We spoke to a representative from the Fox Waterway Agency who said that while they come back stronger some years than others, they’re looking great. If you’re hoping to get a look at them, now’s the time – they bloom from late July to early August for about three weeks.

We had another viewer ask where the best places to see the lotus beds are. According to the agency representative, the parking lot of the Fox Lake Legion Hall off of US Route 12 and near Grass Lake Bridge and the no-wake zone of Ackerman Island, located off Grass Lake Road in Antioch are great places to see the beds in bloom.