The Fall of Icarus and a 1980 Grand Prix 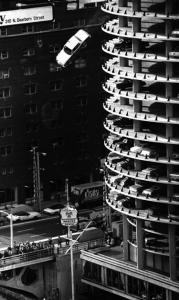 In the 1980 film "The Hunter," a scene showed a car falling off of the Marina Towers into the Chicago River. Are the car and camera still down there?
Mitchell Kasprzyk, Cragin

Well, it would be pretty cool to think a Grand Prix has been sitting at the bottom of the Chicago River for the past 35 years, but this is not true. The car was salvaged after the shoot.

“The Hunter” was an action thriller based on a real bounty hunter, Ralph “Papa” Thorson. Steve McQueen played Thorson in the movie, which turned out to be his last film role before dying of cancer in 1980. Thorson was chasing a fleeing suspect and commandeers a tow truck to follow the suspect up the Marina City parking ramp.

The car flew off the building at 40 miles per hour, guided by a stunt man running behind it.  According to the Chicago Tribune, the stuntman locked a throttle that was rigged to the trunk, and the car crashed through a fake wooden cable barrier on the 17th floor of the parking ramp and dove hood-first into the Chicago River. Witnesses said that when it landed it sounded like the blast of a cannon.

In the original script the driver was supposed to have lived through the crash, but the producer, Mort Engelberg, decided to change the story after seeing the car actually land in the river. It only floated for a few seconds before it sank under the water. Engelberg told the Chicago Tribune if the car had surfaced, they would have filmed the driver escaping from inside, but it sank pretty much immediately, so they cut that from the script. 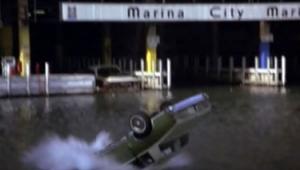 In 2006, a commercial for Allstate Insurance was filmed that paid homage to “The Hunter’s” chase scene. A pressurized air cannon propelled a black 1987 Oldsmobile Cutlass off the 17th floor of the parking ramp into the Chicago River, where Chicago Police tugboats helped retrieve it. The car was hooked to a cable and lifted by crane onto Dearborn Street. Of course, by 2006 we had become much more concerned about water quality in the river so the producers had to take more care in preparing the car. The fluids were removed from the car, the engine was taken out to make it lighter, and the rear end was filled with foam to make it float when it hit the river and easier to retrieve.

What’s up with the building across from City Hall with the winged guys in what I call their boxer shorts?
Mary Neville, Morgan Park

The bright mosaic topping the entrance to 120 North LaSalle is called “The Flight of Icarus and Daedalus,” and it is the work of artist Roger Brown. Roger Brown is best known as a leading member of the Chicago Imagists, a group of artists out of the School of the Art Institute of Chicago that shared a sort of pop art, surrealist sensibility. The 27-by-54 foot mosaic depicting the Greek mythological figures of Daedalus and his son Icarus in flight is made of more than 900,000 glass tiles and was assembled in Italy.

Let’s go back to Mythology 101. The story goes that King Minos imprisoned Daedalus, a renowned craftsman and architect, and his son Icarus in the Labyrinth that Daedalus himself designed. But the ingenious Daedalus created wings for himself and his son made of feathers and wax so they could fly out of the labyrinth and escape. As they prepared to take flight, Daedalus warned Icarus not to fly too close to the sun or the wax in his feathers would melt. But the arrogant Icarus was too thrilled by his flight to listen. He flew too high, his wings were melted by the sun, and he fell into the sea and drowned.

When you consider the mosaic’s location in the financial district and directly across from City Hall, this story of hubris becomes particularly meaningful. The 120 North LaSalle skyscraper was designed by architect Helmut Jahn. His firm, Murph/Jahn commissioned Brown to create the mosaic. We spoke to Lisa Stone, the curator of the Roger Brown Study Collection at the School of the Art Institute of Chicago. She said that the subject matter was Brown’s choice. He wanted a timeless, archetypal theme, so he chose the myth of Daedalus and Icarus. His initial concepts were quite different from the final design. 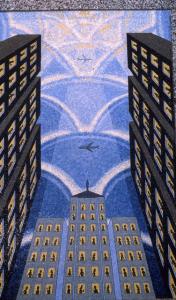 They depicted a raging Minotaur and Icarus falling into the sea, but these were rejected by the architects for being too gloomy. Some even suggested that the depiction of the arrogant Icarus falling into the sea could also be a thumb of the nose to Mayor Richard M. Daley, who had taken office in 1989, two decades after his father’s reign as mayor. So Brown’s new concept focused on the themes of human ingenuity, architecture, and flight that the Daedalus and Icarus myth embodies, and he executed it in the ancient medium of Italian glass mosaic.

The final design’s two men in flight look more like contemporaries than father and son, leading to some speculation that they represented Brown and his partner, George Veronda, who died in 1984. Brown himself died in 1997.

The mosaic took three weeks to install in 1991, and again according to Lisa Stone, the construction workers complained about having to put up a mural of guys in their underwear. Brown also created a companion piece to the Icarus and Daedalus mosaic that is just inside the main entrance titled “Lasalle Corridor Withholding Pattern.” It’s a view of LaSalle Street facing the Board of Trade Building, with the goddess Ceres at the top. Brown himself described the scene as a place that Daedalus would have felt at home in, with the classical Greek facades of older buildings blending with the newer ones. And of course, the planes circling overhead depict the dream of human flight made reality.