Geoffrey Baer turns the lights on at the Auditorium Theatre, tells us where the hulking gas holding tanks went, and revisits 100 years of history at Wrigley Field in this week’s edition of Ask Geoffrey. 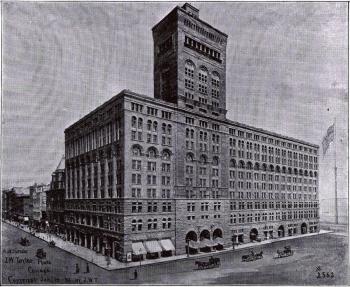 The ceiling of the Auditorium Theatre is five stories above the floor -- how do they change those old-fashioned light bulbs when they burn out?
Stan Krylow

Among its many architectural attributes, the ornate and historic Auditorium Theatre is famed for its soaring ceiling of ornamented arches lined with light bulbs. As our viewer notes, these arches are about 80 feet above the floor – a tall order for changing light bulbs. Rather than use something on the floor to get up to the bulbs, building engineers actually climb up to them inside the ceiling.

The folks at the Auditorium allowed us to come in and film the process. The building’s electrician, Tom, sits in the middle of the auditorium with a list of arches. He counts in from the left and right, noting burned-out bulbs. Armed with his list, he heads up to the network of catwalks that runs between the ceiling and the roof of the theater. Once he’s up in the catwalks, he’s facing the in opposite direction from where he counted the bulbs, so he has to work backwards to find the dead bulbs. So for the tenth bulb from the left in the fourth arch, he counts 10 from the right and pulls the bulb up by a flexible cable. He replaces the old bulb with a fresh one, and pops it back into place. It’s a pretty dirty job -- the catwalks are very dusty and cramped in places. There are about 700 of these light bulbs in the ceiling alone, so they replace them in batches. 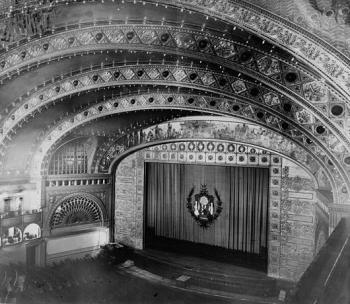 The light bulbs themselves are pretty special, too. The 3,500 clear-glass carbon filament bulbs cast a warm, golden glow inside the theater. They’re replicas of Thomas Edison’s original carbon filament bulbs in order to maintain the historic look of the theater. The bulbs are made by a Florida company called Kyp-Go – each one lasts 7-12 years and costs about $7.50. They’re not terribly energy efficient – only about 8 percent of its energy goes to making light, according to Tom – but since the Auditorium is a historic building, they’re grandfathered under energy efficiency rules.

The Auditorium Theatre was designed by Adler and Sullivan and opened in 1889. It was one of the first buildings in the area to be built with electricity and Louis Sullivan wanted to show that off.  So instead of hiding the bulbs inside of fixtures he exposed them for all to see. In fact, he made the bulbs part of the composition of his famous ornamental vocabulary. Chicago’s Cultural Historian Tim Samuelson described them as electrical flower blossoms popping out of their lush background.

The Auditorium is celebrating its 125th season with special programs and performances, so you’ll have plenty of opportunities to check out the theater all year long. 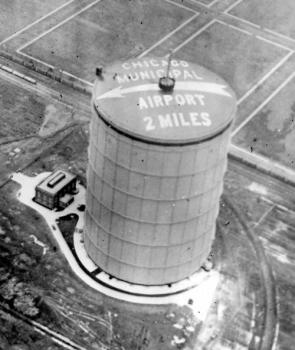 Growing up in Chicago in the ‘50s and ‘60s, huge tank-like structures called “gas holders” dotted the city. What purpose did they serve? What happened to them?
John Rohr, Darien

Imagine having a 30-story high tank with 15 million cubic feet of manufactured gas in your neighborhood! These gas holding tanks were huge, and hard to miss – hundreds of feet high with round metal cages surrounding a giant tank, often with a checkerboard pattern around the top.  They were used for storing manufactured gas near the households they served and near the gas plants where they were created. The checkerboard pattern around the top was to alert low-flying aircraft to their presence. The tank would contract as gas was being used and expand as gas was being manufactured throughout the day, so sometimes you would barely see the tank at all, just the metal surrounding structure. Some of the tanks were even painted on the top with guides to landmarks for aircraft pilots. They were very common technology for the whole country and even overseas, where they’re called “gasometers”. 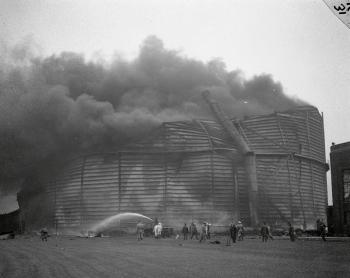 Naturally, such large objects were a prominent part of the landscape, and they turned up from time to time in film and TV. John Schmidt wrote a story about gas tank holders for WBEZ – we borrowed this photo from his story. He mentioned that in the ‘50s TV police drama M-Squad starring Lee Marvin you would sometimes see footage of a gas holding tank. One is also part of the background in the 1948 Jimmy Stewart thriller Call Northside 777, much of which was filmed in Chicago.

By the ‘60s People’s Gas has moved to using natural gas via a network of pipelines and now also has a storage storage facility 4,000 feet below the ground in central Illinois. Gas tank accidents were not common, but when they happened, the consequences were dire, as in a 1927 Pittsburgh explosion that killed 28 people. Closer to home, a gas tank caught fire at 73rd and Central Park when a B-25 plane crashed into it in 1943, killing all 12 people on board the plane.

According to People’s Gas, the last Chicago-area tanks were dismantled by the mid-2000s. Some places overseas managed to re-use the structures in creative ways. In Vienna, Austria, four gas tanks were turned into an apartment, shopping, and entertainment complex called Gasometer City. Another gasometer in Oberhausen, Germany was turned into an exhibition space.

View a slideshow of gas tanks and how some European countries have repurposed them.

In "Chicago Time Machine" you stated that the Cubs started playing at Wrigley Field in 1916. So why are the Cubs celebrating 100 years there this year? 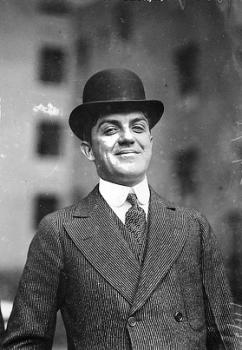 It’s because the park opened two years before the Cubs moved there – so the Chicago Cubs aren’t celebrating their 100th year – they’re celebrating 100 years of baseball at Wrigley Field – or more correctly, 100 years of baseball at the field at Addison and Clark. That’s because the field Cubs fans know and love wasn’t always Wrigley Field – it used to be Weeghman Park.

The field was built in 1914 and named after its builder, Charles Weeghman. Weeghman, who made his money in the restaurant business, founded the Chicago Federals baseball team in 1914 as part of the Federal League, a short-lived third major league in addition to the American and National leagues that make up Major League Baseball today. The name Federals was a kind of default name for the team reflecting their membership in the Federal League. The first major league ball game took place at Weeghman Park on April 23, 1914 against Kansas City – that’s the 100-year anniversary the Cubs are celebrating.

In 1915, the Chi-Feds became the Chicago Whales after a contest in which fans picked a new name for the club. But just one year later, the Federal League was disbanded and the Whales were merged with the Cubs, a National League team that played at one of two West Side Parks until 1915. The newly formed Cubs’ first game at the ballpark was played on April 20, 1916, against the Cincinnati Reds – and a bear cub was there to watch the Cubs win. 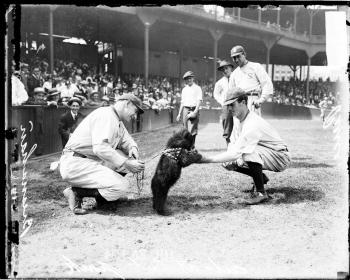 In 1918, Charles Weeghman resigned as club president, and the park became known as Cubs Park until 1926, when chewing gum magnate William Wrigley Jr. took over majority ownership of the ball club. It officially became Wrigley Field, and Wrigley Field has been its name ever since.

But no matter what you call it, throughout its 100-year history, the field has been the site of many unforgettable baseball moments. Babe Ruth’s called shot, Gabby Hartnett’s homer in the gloamin’, and Kerry Wood’s 20-strikeout game all happened at Wrigley Field. Unfortunately for Cubs fans, none of those moments have been World Series wins – but there’s always next year.

View a slideshow of memorable moments at Wrigley Field.