What does China's rising economic and political clout on the world stage mean for the United States? The New Yorker writer and former Chicago Tribune reporter Evan Osnos visits Chicago Tonight to talk about China's rising status and his new book, Age of Ambition: Chasing Fortune, Truth, and Faith in the New China.

Below is an excerpt from the book:

China today is riven by contradictions. It is the world’s largest buyer of Louis Vuitton, second only to the United States in its purchases of Rolls-Royces and Lamborghinis, yet ruled by a Marxist- Leninist party that seeks to ban the word luxury from billboards. The difference in life expectancy and income between China’s wealthiest cities and its poorest provinces is the difference between New York and Ghana. 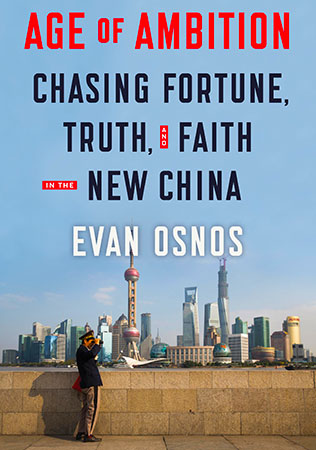 China has two of the world’s most valuable Internet companies, and more people online than the United States, even as it redoubles its investment in history’s largest effort to censor human expression. China has never been more pluralistic, urban, and prosperous, yet it is the only country in the world with a winner of the Nobel Peace Prize in prison.

Sometimes China is compared to the Japan of the 1980s, when a hundred square feet in downtown Tokyo sold for a million dollars, and tycoons were sipping cocktails over ice cubes shipped from Antarctica. By 1991, Japan was in the largest deflation of assets in the modern history of capitalism. But the similarities run thin; when Japan’s bubble burst, it was a mature, developed economy; but China, even overheated, remains a poor country in which the average person earns as much as a Japanese citizen in 1970. At other moments, China’s goose- stepping soldiers, its defectors and its dissidents, recall the Soviet Union or even Nazi Germany.

But those comparisons are unsatisfying. Chinese leaders do not threaten to “bury” America, the way Khrushchev did, and even China’s fiercest nationalists do not seek imperial conquest or ethnic cleansing.

China reminds me most of America at its own moment of transformation— the period that Mark Twain and Charles Warner named the Gilded Age, when “every man has his dream, his pet scheme.” The United States emerged from the Civil War on its way to making more steel than Britain, Germany, and France combined. In 1850, America had fewer than twenty millionaires; by 1900 it had forty thousand, some as bumptious and proud as James Gordon Bennett, who bought a restaurant in Monte Carlo after he was refused a seat by the window.

As in China, the dawn of American fortune was accompanied by spectacular treachery. “Our method of doing business,” said the railway man Charles Francis Adams, Jr., a grandson and great- grandson of presidents, is founded upon lying, cheating and stealing.” Eventually, F. Scott Fitzgerald gave us the slippery tale of James Gatz of North Dakota, who catapulted himself into a new world, in doomed pursuit of love and fortune. When I stood in the light of a new Chinese skyline, I sometimes thought of Gatsby’s New York—“always the city seen for the first time, in its first wild promise of all the mystery and the beauty in the world.”  Read entire prologue here …