Geoffrey visits a rediscovered war curiosity, a long-lost war trophy, and a place in Chicago where north meets north in tonight’s Ask Geoffrey.

Back when the Turning Basin was converted into DuSable Harbor, I saw an object that was submerged in the basin being raised. What in the world was it?
Sandy Seegers, Oak Park

The Turning Basin was a very wide area at the mouth of the Chicago River where ships and barges used to turn or wait before passing through the locks out on to Lake Michigan. In 1999, it was walled off from the river and converted to a recreational boat harbor. In order to do that, they had to remove a mysterious sunken object in the southeast corner of the future harbor. 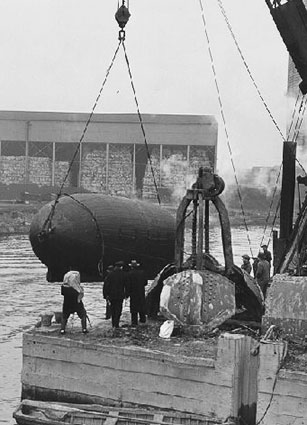 The object was shaped somewhat like the Goodyear Blimp and made of wood. Recreational divers had discovered it in the early 1990s, but had no idea what it was. The agency building the harbor contacted the Underwater Archeological Society of Chicago to help them identify and remove the mysterious object.

A story appeared in the Chicago Tribune and a man named Michael Tym came forward to solve the mystery. It turned out that the object was a WWII-era fuel barge prototype designed and built by Tym’s father -- an inventor and Ukrainian immigrant also named Michael Tym. It was secretly tested in Lake Michigan by the United States Navy in 1942 as part of the war effort.

Michael Tym Sr. created it as a floating fuel tank for Navy ships. When the barge was full of fuel or oil, it would slip almost entirely beneath the surface, making it difficult to detect or destroy by enemies. The prototype in the lake was 34 feet long, but Tym Sr.’s grand plan was for a fleet of 70-foot barges carrying 420 tons of fuel each. That it was made of wood was important because during the war, wood was easily available when metal was not. Tym Sr. lined the vessel with a waterproof material he invented called TymStone to make it waterproof.

The 1942 test run was successful, and the Navy liked it according to Navy papers. But the Navy never ordered more, and the barge remained in the lake until it sank and stayed at the bottom for more than 50 years. Michael Tym Sr. died in 1981.

Members of the Underwater Archeological Society mobilized to preserve the Tym Barge as a diving location by moving it a few miles out into the lake. The effort was documented on video by Robert Gadbois of the UASC, who generously allowed us to use the footage for this story. They partially raised the Tym Barge and relocated it three miles out in Lake Michigan near another famous lake wreck, the South Tug, as a dive site. It was a popular attraction for divers, but the weather and currents caused the barge to break up into a pile of wood by the following year.

I saw an old map of Chicago, and at North Ave. and the lakefront there was a mention of a "Spanish cannon."  What was this and where has it gone?
Jack Quinn, Evanston

The Spanish Cannon referred to on the 1903 map was a 25-foot-long, 12-ton cannon retrieved from the Spanish armored cruiser Maria Theresa, which was captured in the Battle of Santiago during the 1898 Spanish-American war. And it did indeed sit at the easternmost end of North Avenue near the lakefront. 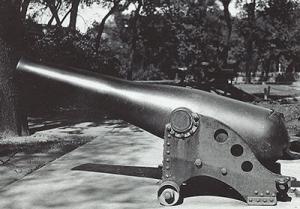 The Spanish-American War was a three-month-long conflict with Spain over Cuban independence was ignited when the USS Maine exploded in Havana Harbor, killing 266 American sailors.

In 1899, the Lincoln Park Commissioners made a request through Congressional representatives to have one of the Spanish cannons captured by the US sent to Chicago as a “magnificent trophy from the late war with Spain.” Coming off the patriotic fervor of the war, such trophies were in high demand across the country. Park boards within Chicago were even battling against each other to capture to the cannons.

A coterie of politicians pressed Chicago’s claim to the war relics, citing the large number of Chicagoans who fought in the war. Congressman James Robert Mann stumped for his South Side district to get a cannon for Lake Front Park, saying it would “serve as (a) reminder… of our glorious victories and inculcate patriotism in the minds of our boys and girls.” Ultimately, Lincoln Park was decided upon as a good spot for the cannon given its central and easily accessible location.

The cannon was brought to Lincoln Park in a grand procession led by heroes of the battle. A newspaper report from the time described the parade as a great occasion, saying, “it is undeniable that the people did remember the Maine when they looked at the dismantled Spanish cannon and gloated over its capture and cheered in gladness that the ship that once carried it had been sunk by American sailors.” 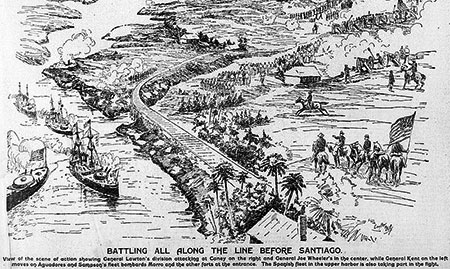 There actually used to be three more cannons in Lincoln Park, one a British World War I cannon and two from the American Civil War -- so it would seem obvious that the street that runs between Diversey and LaSalle along the lakefront through Lincoln Park was named Cannon Drive for the cannons, but it wasn’t. We learned that it was actually named after John C. Cannon, an area alderman and election commissioner.

As for the actual cannons, according to park district records, all four of them were removed by 1946 and melted down as part of the World War II effort.

In the Edgebrook neighborhood, most of the streets have a "north" designation, even though these streets intersect. Why is that?
Rima Mandwee, Lakeview

Chicago is famous for its regular grid system of streets that allows visitors to find it (relatively) easy to navigate addresses in Chicago because they are numbered by their distance from the intersection of State and Madison downtown.

For example, the intersection of Irving Park Road and Western Avenue is 4000 north of State Street and 2400 west of Madison. One place this doesn’t hold is in Edgebrook, a neighborhood on the northwestern edge of the city, part of the Forest Glen community. A street map of the area looks like a tangle of spaghetti, where you’ll encounter baffling intersections like North Lenox and North Leoti, or North Louise and North Landers.

At first, it seems that the answer is the diagonal orientation of the streets, which don’t run strictly north-south or east-west. However, that doesn’t explain why the developer who laid out the streets wouldn’t have designated half of them as “north” and the other half as “west”.

To try to answer this we called upon our friend, the historian and cartographer Dennis McClendon, who says the area was annexed to Chicago in 1922 and appears to have been developed around 1924. Dennis said there is no way to know for certain, but that it’s not uncommon to have anomalies like this where, as he put it, “the 20th century vogue for curving streets overlaps the 19th century vogue for rational street.” 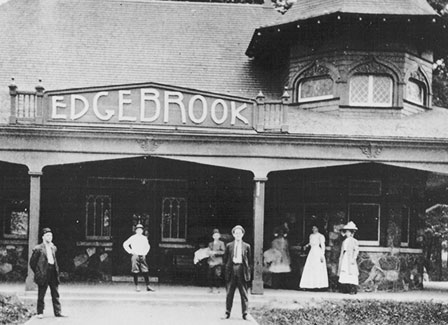 As an example, Dennis noted that in southwest suburban Hickory Hills you’ll find the intersection of 91st Place and 91st Place. Dennis said it appears that the developer of Edgebrook was more interested in building off-kilter streets with Native American-inspired names (which was also a craze at that time), than adhering to the strict north-south east-west designations, and for whatever reason, regulators like the bureau of Maps and Plats and the Postal Service didn’t object.

We should note, though, that while the north-south east-west designation is not followed in Edgebrook, the streets do adhere to the alphabetical naming convention for north side streets west of Pulaski. That is where all streets within a given mile start with the same letter of the alphabet, which explains the proliferation of “L” names in Edgebrook.

There is at least one other place in the city where you can find a north-north intersection: the intersection of North Ogden and North Milwaukee Avenues just west of Goose Island in Noble Square.