Geoffrey Baer's newest program -- A Taste for the Past: Architect Pier Carlo Bontempi -- is a profile of a little-known Italian architect who is this year's winner of the Driehaus Prize, a prestigious, Chicago-based award for architects who design classical and traditional buildings. It debuts on WTTW11 at 8:00 pm Thursday. Geoffrey joins us to tell us about his adventures in Italy. 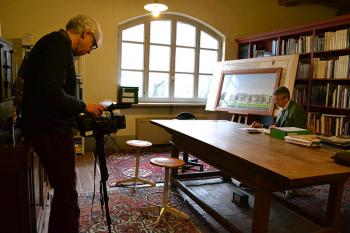 Read an interview with Dan Andries, producer and co-writer of the documentary:

How did the idea come about to do this documentary and how did the process begin?

We tried to find out as much about him as we could and there’s not a lot out there. There are three published books, a handful of articles, and a website. It was pretty thin for the kind of work we’ve done in the past.

Also, Bontempi doesn’t speak English. We relied heavily on conversations we had with the Driehaus award jury who helped us understand the larger story.

Where did you travel to shoot the documentary, and how long did the shooting, writing and editing process take?

We were in Europe for 10 days. We flew to Paris and spent a couple of days in Val d’Europe, a city built around Disneyland Paris. It’s very new and is in middle of nowhere. Bontempi built a huge square there. The design is based on a square in Lucca, Italy. We were there to shoot that and to interview people from Disney, and to interview Maurice Culot, the architect who wrote a book about the square called the Place de Toscane that was designed by Bontempi.

Then, we took the train to southern France where we interviewed Leon Krier, an architect, urban planner and theorist. Krier’s approach to planning has had an effect on Bontempi. Krier tries to create urban plans that are walkable, intriguing, and friendly. This approach to city planning is important to Bontempi. And Krier is also a member of the Driehaus jury.

Then, we drove to Italy. We spent half a day in Florence interviewing Bontempi’s teacher, architect Adolfo Natalini. Then, we went to Parma to interview Bontempi.

After returning, we spend about 7 weeks of writing and editing to create the final product. It was very scary in a lot of ways, but ultimately very, very pleasant. Scary to go to another country, work with different languages etc. but it worked out and we had a great team. 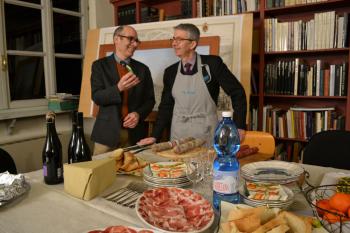 How did you communicate with Bontempi since he doesn’t speak English?

Geoffrey [Baer] and Bontempi spoke French to each other. Associate Producer Liz Reeves speaks Italian. And, Bontempi’s wife and two colleagues speak English. But, for the interview, writer Jay Pridmore, who splits his time between Italy and Chicago, joined us and translated the interview as it happened.

Even though I didn’t speak any Italian, it was obvious to me during the interview that Bontempi had done a great job. He is a good storyteller and a strong communicator.

Who is Pier Carlo Bontempi, the architect?

He is a contemporary Italian architect who does traditional, vernacular architecture mostly in Italy. His strongest works are multi-building developments that have the appearance of old Italian towns. He tries to use traditional construction methods if it’s in the budget and he can find the people who can do it. He is happy when his work is confused with something old. His style of architecture looks like it was built 300-500 years ago. But they are very new and up-to-date. His work is very beautiful and charming.

Are any of his projects well-known?

His biggest project is still under construction and I predict it will bring him more attention than he has gotten so far. It’s a library and cultural center for Italian publisher Franco Maria Ricci. There’s a mammoth pyramid at the center of it in a gorgeous courtyard. It’s a stunning piece of work in the middle of a 3-kilometer long bamboo maze just outside of Parma. 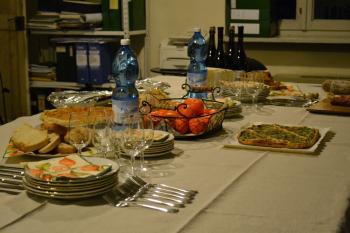 Who is Bontempi, the man?

Genial, formal, generous, calm. He is all about tradition. Tradition is the thread that runs through everything. He’s not in a hurry.

Can you share a specific anecdote from your trip?

There’s always time for lunch or dinner. We came rushing in one day to do an interview with him and we were behind schedule. We arrived, and one of his friends waved us over to the office. We went upstairs, and they said, “Now, we eat lunch.” And we had a meal and then did the interview. It didn’t matter how far behind schedule or where were rushing to. There was always time for a meal.

The everyday in Italy can be decidedly different from American life. Check out the roadside fare the production team found en route to their visit with Pier Carlo Bontempi, and a few scenes from the home of Franco Maria Ricci in the slideshow below.

Watch an anecdote from Bontempi's childhood below:

~ Erica Gunderson contributed to this report.