Pros and Cons of Vaccinations

Vaccinations for children have recently come up in the news with some celebrity moms opting out of vaccinating their kids and pointing to a potential relationship between additives in certain vaccines and autism. We talk with Dr. Adannia Enyioha of Rush University's Medical Center and Dr. Melanie Brown of Comer Children’s Hospital about vaccinations and the controversy surrounding the headlines.

Kristin Cavallari, reality star and wife of Chicago Bears Quarterback Jay Cutler, recently came out saying she chose NOT to vaccinate her child citing “scary statistics” regarding additives in vaccines that may cause things like asthma, allergies and autism.

This topic has generated buzz in the past as well with other celebrity moms like Jenny McCarthy going on what some have called an “anti-vaccine crusade” after stating that she believes her son developed autism after getting the vaccine for measles, mumps and rubella (MMR).

We asked moms on both sides of the spectrum for their thoughts and decisions regarding vaccinations for their own children. Here’s what some of them had to say:

“I chose to vaccinate because I was more concerned about the potential risk of my children dying if they were exposed to an affliction that could have been prevented with a vaccination. According to research there still isn't enough knowledge on autism to safely rule out or attribute it to vaccinations. I personally am not concerned about the causal relationship because I don't think autism is a finite disorder that one can say is definitively caused by vaccines if there are children with autism who have NOT been vaccinated.” – Vanessa, mom of 7-year-old twins

“My main concern was spacing the vaccinations out. Many friends said they felt there was a connection between having vaccinations back to back and autism. I did exactly that. I would wait several months to a year in between the vaccinations. I also did not get more than three vaccinations at one time. I noticed one friend had a lot of problems with her son when giving more than three back-to-back vaccinations in one visit...He appeared to show signs of a developmental delay. He also became very sick. I also would give my daughter Tylenol about 30 minutes before any vaccinations. That was primarily to offset any pain or discomfort, or fever that she would have experienced.” – Carol, mom of 6-year-old girl

“In terms of vaccines, for me, there has never been a question of whether or not to vaccinate my kids. Not only do I firmly believe vaccines protect kids, but I also strongly feel that it is a matter of public health safety. When kids are not vaccinated, they risk spreading a disease if they catch it… I do NOT believe that vaccines are the cause of autism… When "stars" come out to say that they have chosen NOT to vaccinate their child I am furious. People will tend to follow someone like that without bothering to even understand why. It is totally irresponsible. Recently there have been a number of outbreaks of diseases that are completely controlled by vaccines. This has been caused by parents who decided, without any true scientific evidence, that vaccines were not safe.” – Faith, mom of two teenagers

“I did a LOT of research, as I think most people who choose not to vaccinate do…I discovered that the ingredients in these vaccines were harmful to my child's health, and knowing that, I could not with clear conscience, subject my child to these vaccinations…I also knew of a woman whose son developed severe autism and she believed it was partly due to the MMR vaccine he received at age 5. Another woman told me of a woman she knew of whose two sons also developed autism, and she believed it was caused by the vaccines as they were developing normally before receiving the vaccines. This was enough to cause me to do further research on my own to find out if these vaccines were really safe, and if I wanted to give them to my child…I have also talked to many moms since then, especially in the autism community. I was surprised at the number of moms who told me that they believed their child's autism was at least in part caused by the vaccines they received…I believe that vaccines are not the only cause of autism, but I do believe that the toxins and viruses in vaccines are one contributing factor to the rise in autism today…The media is also giving more attention to this issue. Whether the media portrays a stance for or against vaccines, it causes parents to become more concerned and do more research themselves, which is a great thing. As well, with celebrities coming out on their stances on vaccines, it just brings more awareness to the issue…Mother after mother after mother, are coming out saying my child was developing normally, and then all of a sudden, something changed. How can thousands upon thousands of parents all be experiencing the same thing, and the medical community just turn a blind eye to it, and accuse these mothers of making this stuff up? It's insane. The researchers need to do more studies on these kids and the possible link between autism and vaccines…I personally don't plan on waiting for the official study to come out to tell me that vaccines, the way they are made today, are harmful to my child's health…Aluminum and other harmful ingredients (including the virus itself) are still in these vaccines, and giving multiple vaccines all at once to a newborn infant, whose immune system has not fully developed yet, is a recipe for disaster…I believe there is a risk either way, whether you choose to vaccinate or not. I respect other parents' choice to vaccinate, and I hope that other parents, especially Christians, would respect another parent's choice not to vaccinate. We each have a responsibility for our own children's health, and if you are a believer, you have a responsibility to God one day. I take that very seriously. My only hope is that parent's would do their own research and not rely solely on the advice of their doctor when making any decision about their child's health.” – Sheri, mom of four kids ages 13 and under

“I really do not believe that I have more knowledge or skill set to go against the suggestions of our pediatrician…Vaccines are regulated by so many institutions in the U.S. that I believe they are safe…There are many genetic and age-related reasons for autism. The correlation would take years of studies under controlled environments to confirm this assumption.” – Kasha, mom of 12-year-old boy

“On vaccinations, plain and simple, I followed the pediatricians who follow the American Academy of Pediatrics guidelines. Schools frankly won't let your child in without demonstration of sufficient immunizations and honestly, I would not "freelance," that is, think I know more about medicine and decide to NOT vaccinate. Insane. This is one area where medicine has made progress eradicating disease and parents who opt not to get vaccinations have the ability to both harm their own children and participate in the spread of illness… Having spent so long in the pharmaceutical field, I do believe that there is a fact base which most people lack. I have seen YEARS of research, clinical trial testing, FDA reviews --- that is the sort of information/data which sways me. The rest -- like the media coverage of K. Cavallari -- simply annoys me. I would NOT let her kids play with mine. Communicable diseases have a well understood pathway; it is just that simple.” – Lisa, mom of three teenagers

“I have not opted out of any vaccines or delayed any yet, even though certain aspects of vaccines make me nervous. I want to protect my baby and not put him at an increased risk for other things… I am very concerned about side effects and risks that vaccines can cause since there are studies suggesting and showing this. You want to do what is best for your child and want to protect them. While vaccines help to protect them, the side effects and potential risks make me nervous…You want to help protect your child with vaccinations and not put them at risk or increase their risk for autism or other things.” – Victoria, mom of 3-month-old

“I have had all three of my girls vaccinated with what the standards are according to the pediatric academy. I have had a micro preemie as well as a full-term healthy newborn. I have never had any concerns with vaccinating my children. I believe that the good outweighs the bad. I would rather my girls have the occasional fever and pain at injection site after a vaccine than to actually require hospitalization from getting the disease that could've been prevented. I feel that all medications pose a potential threat to our bodies, even as adults, but it's a risk we take. If I were to have another baby, I would use vaccines without hesitation. I didn't research anything prior to delivering. I work in OB, and I realize that some things are necessary to keep our children healthy.” – Valerie, mom of three girls ages 7 and under

“I have had all three of my children vaccinated because I did have a conversation with my pediatrician and I was asking her about the correlation between autism and vaccines, and she said there was no real evidence or research proving that.” – Felicia, mom of three boys ages 5 and under

View a graphic of the CDC's recommended immunization schedule: 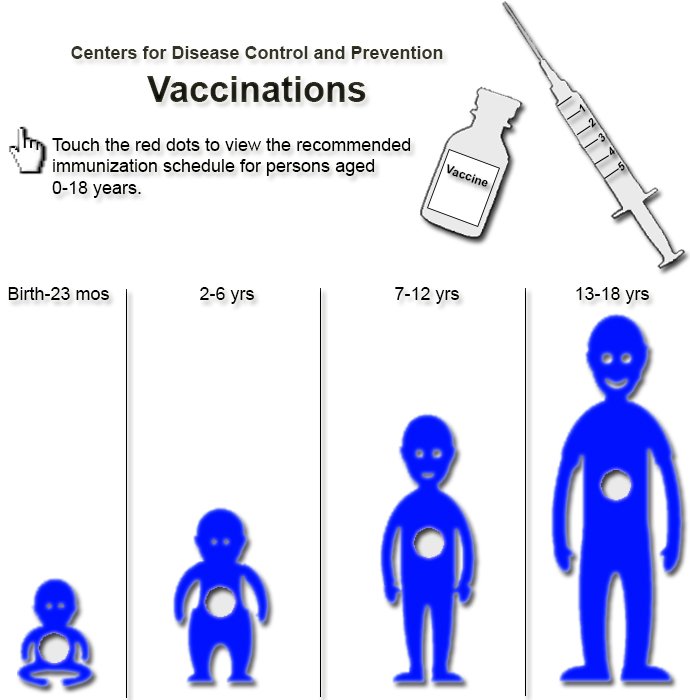