Geoffrey Baer sheds some light on a colorful Chicago firehouse tradition that has a maritime connection, the real life Mr. Selfridge’s time in Chicago and the location of the city’s first revolving doors this week's edition of Ask Geoffrey.

We learn in "Mr. Selfridge" that the family came to London from Chicago. Let’s hear more about their time in Chicago. What became of the children?
-Kathy C., North Park 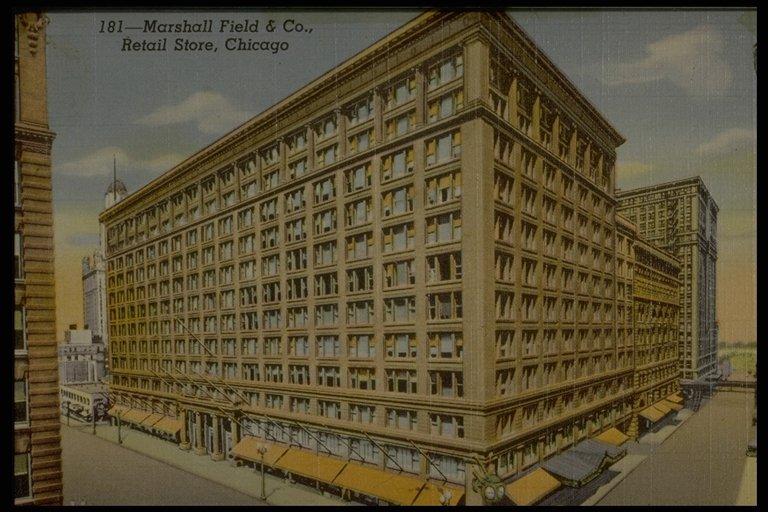 The series, "Mr. Selfridge," tells the story of Harry Gordon Selfridge’s time building a retail juggernaut in London, but before becoming a household name in London, he honed his skills as a retail pioneer in Chicago.

Harry Selfridge was born and raised in Ripon, Wisconsin, and at age 21 came to Chicago to work as a stock boy at Field, Leiter & Co., which later became Marshall Field’s. At Field’s, it quickly became apparent that Selfridge was not your average stock boy. Over his 25 years at Field’s, he worked his way up to junior partner and was given interest in the store.

The revolutionary ideas Selfridge developed over his years at Field’s went on to change the way Americans – and later, Britons – shop and live. He emphasized top-notch customer service, uncluttered displays, and tempting bargains. Selfridge was the man behind tea service at Marshall Field’s, which ultimately developed into the elegant Walnut Room restaurant. All this was part of Selfridge’s idea that shopping could be a leisure activity, rather than a tedious ordeal. 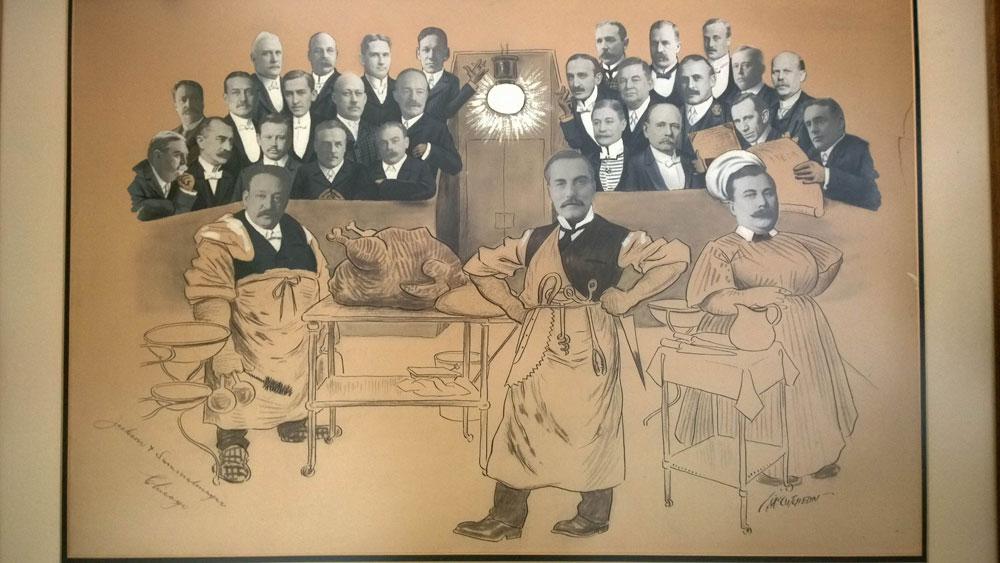 A John T. McCutcheon illustration shows Mr. Selfridge carving up the Schlesinger and Meyer department store and “serving to the partnership of Messrs. Carson, Pirie, Scott and another dozen gentlemen adventurers in 1904."

The owner of the illustration, viewer Michael Shymanski, wondered if this means Selfridge at one time owned the Schlesinger and Meyer department store, which later became Carson, Pirie, Scott & Co. And in fact, he did, but only for a short time. Selfridge left Marshall Field’s in 1904 and sold his interest in the store after a long tumultuous relationship with Mr. Field himself.

That same year, he purchased the Louis Sullivan building at State and Madison, then the home of department store Schlesinger & Mayer. Just eight weeks later, he sold the leasehold and building to Chicago financier Otto Young, who later sold to Carson, Pirie, Scott & Co.

Two years later, Selfridge moved to England with the money from the sale of Schlesinger & Mayer and built the Chicago-style department store that would make his name famous. He even hired Daniel Burnham, who had also designed Marshall Field’s State Street Store, to design a very similar building for him in London.

As for the four children he had with his wife, Rose Buckingham of the famed Chicago Buckingham family, all did quite well for themselves. Their three daughters, Rosalie, Violette, and Beatrice, all married into European nobility.

And their only son, Harry Gordon Jr., was the only one to return permanently stateside. He returned to Illinois to publicly marry a shopgirl he had met while in London – “publicly” because the couple had already secretly been married for 16 years and had four children! Harry Jr. remained in America while he worked as a retail executive for the Federated Department Stores, which, of course, later became Macy’s.

Why do Chicago area firehouses have a green light and a red light on the sides of the bay door?
-Geoffrey Baer, WTTW 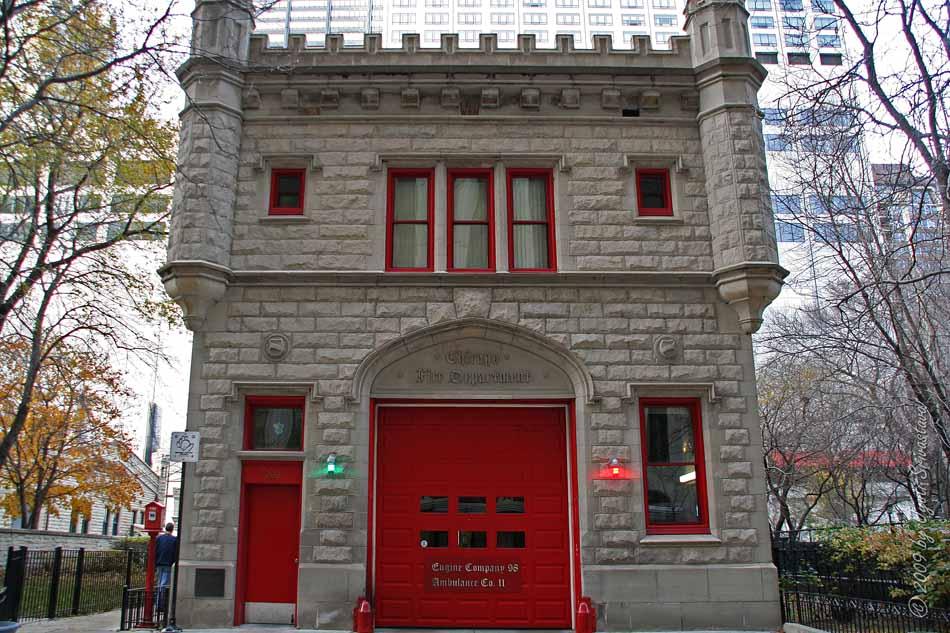 The convention of a green light and a red light flanking firehouse bay doors and also being mounted on all Chicago fire apparatus actually has its roots in maritime tradition. In the late 1920s, a new fire chief was appointed named Albert Goodrich.

Goodrich’s family owned a rather famous steamship line that ran excursions on the Great Lakes, so his nautical background meant he was very familiar with maritime navigation protocols, and he adopted some of them for the fire department.

Buoys at harbor entrances and channels also follow this lighting convention to keep ships from running aground. The mnemonic for this is “red, right, returning” and “green, left, leaving” – especially helpful to remember for safe passage in inclement weather or in the dark.

One of Commissioner Goodrich’s first acts was to adapt this convention to fire apparatus, placing a green light on the right side of bay doors and trucks, and red lights on the left sides. This was a time of great growth and transition for the fire department, and Goodrich was instrumental in modernizing equipment and practices.

He was the first commissioner to command a fleet composed entirely of motorized vehicles. This motorization of fire fleets was, of course, happening around the country – but even though it would be fitting for Chicago to be the birthplace of a fire department tradition, the red and green lights custom is something you’ll see in very few places outside of the Chicago area.

When and where were the first revolving doors installed in Chicago? Did most buildings retrofit immediately?
-Bobbi Pinkert, Chicago 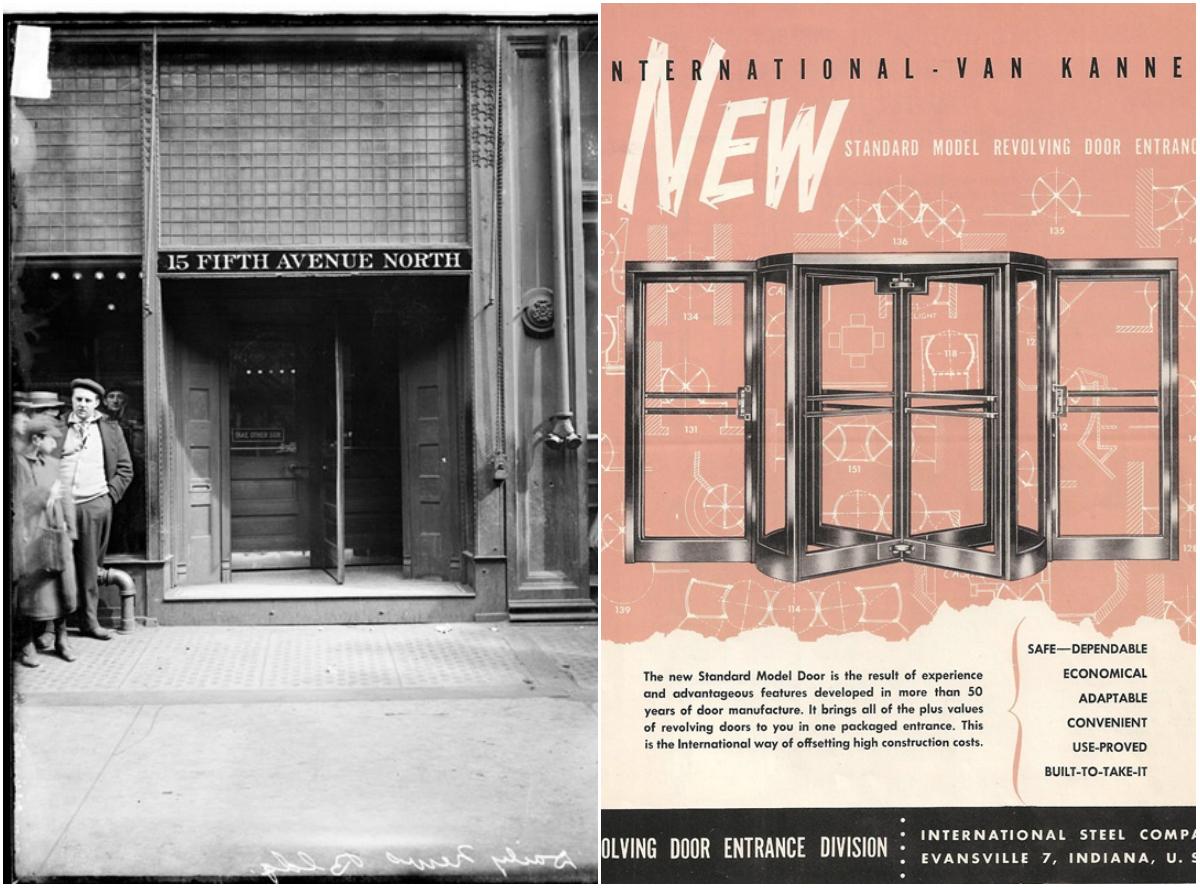 We’ve done some digging through historical photos, and the earliest photographic evidence we could find of a revolving door in Chicago is of the old Chicago Daily News Building on Wabash from 1911.

We can be certain that revolving doors appeared earlier in Chicago, though. Iowa State University architecture professor Thomas Leslie led us to a 1901 Chicago Tribune romance column, telling the story of star-crossed lovers stuck in “one of those tremendous revolving doors which are a terror to everyone who uses them.”

The contraption was clearly still a novelty in 1901 because the story noted the revolving door had a doorman. Leslie found Chicago real estate listings mentioning revolving doors well before the 1911 photo as well, and we also found a couple more photos not long after 1911 that confirm revolving doors were regularly used in Chicago by then.

As useful as they are in a city known for its rough winters, the revolving door was not invented in Chicago. The first American patent for a revolving door was issued in 1888 to a Philadelphia man named Theophilus Van Kannel. He called his invention the Revolving Storm Door. 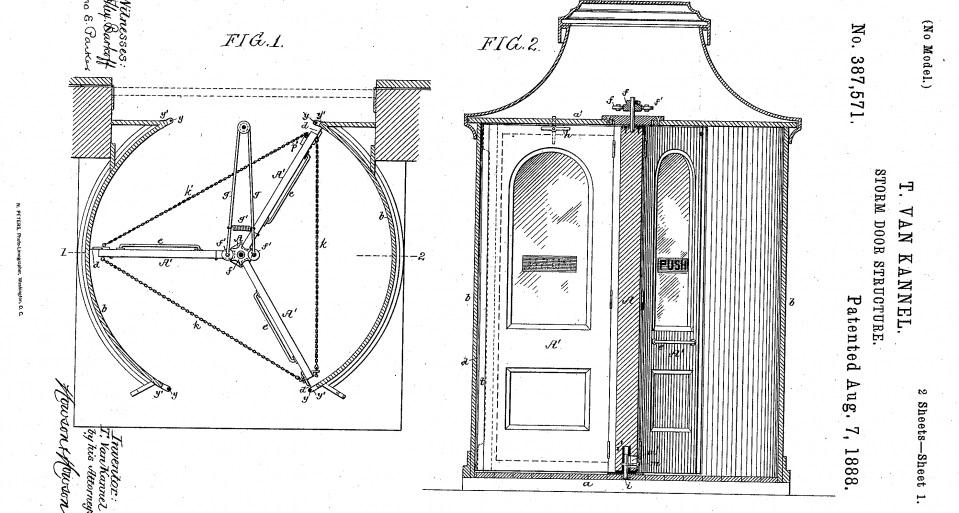 A blueprint of the revolving door.

The apocryphal story about Van Kannel is that, as a confirmed bachelor, disliked the chivalrous convention of opening doors for ladies to pass through – so he invented a door that is always open (but that the lady going first through the doors, has to push to open. Not very chivalrous!)

Still, it’s fair to say that he also had better reasons for the invention – he is quoted as saying that with regular doors, “every person passing through first brings a chilling gust of wind with its snow, rain, or dust, including the noise of the street, then comes the unwelcoming ‘bang.’”

Another reason that revolving doors are so common in Chicago is that they are crucial to the construction of skyscrapers. In a tall building, warm air rising to the top of the building pulls in air from the outside. This is known as the “stack effect” phenomenon, and revolving doors eliminate that air transference.

In the early days of skyscraper construction, this was an important and useful feature, particularly in cities with cold weather. And of course other benefits of revolving doors – draft prevention, noise reduction, and traffic control – remain important for modern buildings. Most importantly, they are by far the most energy-efficient door option – so use them whenever you can!

And one last note – eagle-eyed viewers of the video during the question about retail pioneer Harry Gordon Selfridge might have noticed that in the clip of the show "Mr. Selfridge" set around 1909, he is standing in front of – you guessed it—a very busy revolving door!